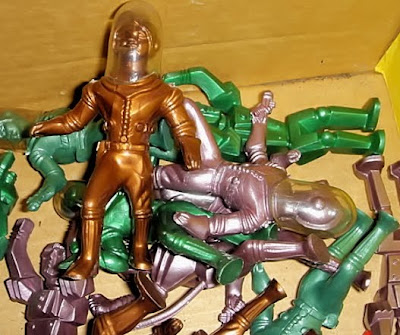 Sometimes I wonder about toy safety regulations. Sure, small parts and detachable items are a concern but this over reaction to chemical components may be unwarranted. The federal government recalls certain toys for excessive use of lead or chromium, or cadmium in paint. But what are the standards and how did the government arrive at them. And aren't chemical born illnesses a result of long term exposure. One doesn't die or exhibit immediate physiological problems with a lick on a lead soldier.

"Before you buy that train set, do your homework"

Don't assume children's toys are made from safe products. Healthystuff.org and Goodguide.com can point parents in the right direction.

Los Angeles Times
Just what you need: homework to do before you run out to buy that train set or action figure on your loved one's wish list. Surely it goes without saying that if it's made for a child, it should be manufactured with materials that are safe for a child. But that's not always the case, experts say.

A series of massive toy recalls in the last few years has drawn attention to the need for tighter regulations on chemicals and materials used in children's toys. Most famously, in 2007, Mattel — the largest toy company in the world and the brand behind such household names as Ken and Barbie — recalled more than 2 million toys that were in violation of the U.S. standards for lead in paint. The total recall count that year because of lead paint violations: more than 17 million.

The U.S. government has since adopted a handful of regulatory measures to hold companies more accountable and to tighten restrictions on the use of toxic substances. But there are many toxic chemicals in toys that are not regulated at all, says Rachel Massey, a policy analyst at the University of Massachusetts in Lowell and a coauthor of a November study on gaps in regulation of toxic substances in toys and children's products. Cases highlighted in the media for violation of standards are just "the tip of the iceberg," she says.

About 80,000 chemicals are used in manufacturing, many in toys and other children's products. The U.S. Consumer Product Safety Commission, the government agency responsible for protecting the public from hazards in consumer products, regulates only 14 chemicals in toys: eight heavy metals and six phthalates, which are used to soften plastic. The phthalates, which have been linked to reproductive and developmental abnormalities in animal studies, have been restricted only since 2008. Toy companies, unlike food manufacturers, are not required to divulge what's in their products.

One of the main problems is that children, particularly those younger than 3, often put toys in their mouths or otherwise use toys in ways that they were not intended. But even older children can be at risk due to behaviors such as sucking on a necklace. Experts agree that until a comprehensive U.S. policy is in place to identify and disclose all toxic ingredients, consumers should (A) not panic and (B) do some research before joining the throngs of holiday shoppers.

• Avoid buying costume jewelry for children. As lead has come under closer scrutiny, cadmium is increasingly being used as a substitute for lead in paint, toys and children's jewelry. Cadmium is a neurotoxin and carcinogen that children can be exposed to when they handle, suck or swallow the product. In January, the CPSC recalled a large quantity of children's costume jewelry because it was found to contain high levels of cadmium.

• Inspect the plastic labeling and product packaging and look for the familiar triangular recycling symbol containing a "3" with a "V" underneath the symbol. The labeling is not universal but is used on a significant number of vinyl products. Flexible, rubbery plastic products that emit a distinct odor are often good indicators that the product contains a vinyl plasticizer, Gearhart says. The Center for Health, Environment and Justice has a PVC-free guide.

• Don't buy brightly colored plastics when purchasing items that a young child might put in his or her mouth. Despite the recent tightening of federal regulations, these plastics could contain cadmium, lead, organotins or other toxic pigments or stabilizers, Massey says.

• Consult sites such as Healthystuff.org and Goodguide.com to find out if certain toys contain brominated flame retardants (BFRs) — found in baby products, such as mattress pads, and toys, such as dolls, swords, action figures and ones made of foam and rubber. BFRs have been linked to a number of adverse health effects, and one family of BFRs is classified as a possible human carcinogen by the U.S. Environmental Protection Agency. Healthystuff.org and Goodguide.com both screen for bromine, which is a likely indicator of BFRs. Choose products that have low or no bromine content.

• When buying toys that contain textiles or leather garments, be conscious of "azo dyes," which are widely used in the textile and leather industries. Azo dyes can form cancer-causing compounds when inhaled, absorbed through the skin or taken up by the gastrointestinal tract. Unfortunately, since these chemicals are not regulated, the best way to avoid them is to select toys made of wood and natural products, or toys that bear eco-labels, which are becoming more widespread. When buying a textile product such as a doll or stuffed animal, look for a European eco-label such as Oeko-Tex, which can be found in some specialty toy stores. The European Union has much stricter regulations on toxic chemicals than does the U.S.

• Choking on toys, toy parts, balls and balloons is a hazard for children younger than 3. From 1990 to 2007, 196 children died after choking or asphyxiating on a toy or toy part,, according to U.S. PIRG, an umbrella consumer-advocacy organization for individual state Public Interest Research Groups. Use an empty toilet paper roll to test whether a toy or toy part may be a choking hazard. If the item passes through a toilet paper roll, it is too small for children younger than 3 or children who put toys in their mouths.

Also watch out for parts that are barely larger than this industry standard, because children have choked on parts that are larger, says Elizabeth Hitchcock, public health advocate for U.S. PIRG. "We always caution parents to really look hard at a toy, take it out of the box and use it before they put it in the hands of their child," Hitchcock says. "See if there are parts that will break off, and don't just rely on the label."

• Do not buy products bearing the California Proposition 65 label with wording similar to this: "Warning: This product contains chemicals known to the State of California to cause cancer and birth defects or other reproductive harm."

• Avoid toys containing small magnets that can be swallowed. When ingested, strong magnets will attract to each other and can cause serious internal injuries.

• Though these are few and far between, look for toys and children's products that have labels indicating what ingredients were used to make them.

• Check out lists put together by groups that have conducted tests on toys. Healthystuff.org ( www.healthystuff.org ), run by Ecology Center, a nonprofit organization based in Ann Arbor, Mich., does independent testing on a range of consumer products including toys, providing snapshots, available online, of potential chemical hazards. Healthystuff.org has screened more than 5,000 toys since beginning its testing in 2007. It uses an X-ray technology to look for hazardous substances, but the technology can't detect all chemicals of concern. It ranks products by level of concern based on about 10 priority chemicals. GoodGuide.com ranks products, including toys, based on (among other things) environmental and health effects.

The Eco-Toy Alliance ( http://www.ecotoyalliance.com ) is a partnership of four companies dedicated to making Earth-friendly toys, which tend to be made with nontoxic, natural materials (check each product to be safe). One of the companies, Green Toys Inc., markets its toys as being free of phthalates and bisphenol A, a compound commonly used in plastics and linings of food cans that is now considered a toxic substance in Canada.

In future years, other tips will help consumers choose. A new environmental certification organization named "EcoLogo" is set to be finalized by the end of 2010, for example. It will provide eco-labels for toys based on the health and sustainability of the products used to manufacture those toys. Toys bearing the eco-label should begin showing up on shelves next year.

And in California, the Department of Toxic Substances Control is finalizing new regulations for chemicals under the state's Green Chemistry Initiative. Companies will have to disclose information on priority chemicals in the products they sell in California and in some cases seek safer alternatives. The department plans to release its initial list of priority chemicals in March 2012, then the publication of a list of products that use those chemicals by September 2013.

In the meantime, the safest bets are to look for toys made with natural materials, such as unpainted wood, and natural fabrics such as wool and cotton. When buying painted wood products, consider companies that use nontoxic paints or dyes. Look for toys bearing eco-labels and for brands committed to using safe, nontoxic products in toy manufacturing.
Posted by Mercury at 5:28 AM