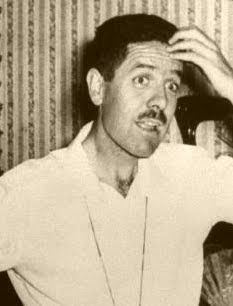 The only film of his that I saw was one called The Executioner [El Verdugo] [USA title Not on Your Life] [1963]... 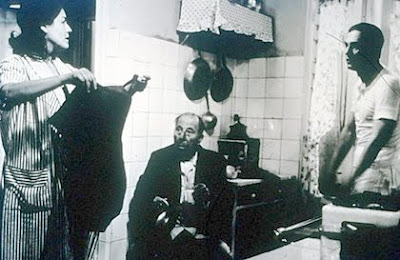 The history starts with the main character (an old executioner in the Spain of early 60's) approaching retirement age. As his profession is not exactly what you could call "popular", he (a very gentle and nice man, caring, and proud of traditions) begins to worry about who might take his place when he retires. He has a daughter, but, unfortunately, she seems doomed to perpetual "spinsterhood": as soon as any prospective groom learns about her dad and her dad's "trade", he runs away from her, scared. A sad life... However, a new character enters: the local undertaker, a handsome and young man who has exactly the same problem... No girl wants him given his profession. So, you have the woman whom almost nobody would marry and the man whom almost nobody would marry. Obviously, they are meant for each other. But here the old executioner has something to say: He does not object to her daughter marrying the young undertaker; he seems a decent man, and all that.

El Verdugo was the eighth feature film written and directed by Luis García Berlanga in collaboration with his longtime associate, Rafael Azcona. The story pivots upon the fate of a pleasant, if somewhat timid, young undertaker whose dream is to go to Germany and become a mechanic. This dream is thwarted when he happens to meet the executioner in a prison where both of them are plying their trade. In spite of the aversion that the young man (and everyone else) feels for the executioner, he not only ends up marrying the executioner's daughter, but even takes over his father-in-law's business.

El Verdugo is a farce or domestic comedy filled with macabre touches and scenes of black humor in which the taboos associated with death are transgressed. Even the actual mode of execution is the subject of morbid jokes as the executioner, who garrots his victims, measures the neck size of his future son-in-law. The film is punctuated with these bits of gallows humor as well as with comic reversals that take the audience by surprise. A fine example of this occurs at the end of the movie when the young executioner is carried kicking and screaming like the victim into the prison where he will perform his first execution.

Berlanga's irreverent treatment of death is symptomatic of a tendency found in all of his movies, to send up pomposity and pretensions, and to deflate generally accepted values and beliefs. In one sense, the film is about two outcasts, the undertaker and the executioner's daughter, both of whom are avoided by everyone. When they join together, it is with the hope of having a better life, but as Berlanga demonstrates, these hopes cannot be realized. Like other protagonists in Berlanga's film, the undertaker becomes caught up in a destiny which he did not choose. He is a victim of innocent concessions made along the way that ultimately lead him to be sentenced to his fate of becoming the executioner. He is the true victim, the one who is strangled in a web of circumstances beyond his control, caught up in the system of justice and retribution that is all encompassing. In the context of Franco's Spain, the ideological dimensions of this message are that as the executioner tells his son-in-law, where there's a law, someone has to pleasantly or not enforce it.

The New York Times
Luis García Berlanga, an influential Spanish filmmaker who tweaked the fascist regime of Gen. Francisco Franco and its censors with shrewdly subversive social satires, died on Saturday in Madrid. He was 89.

His death was confirmed by the Spanish film academy. He had been suffering from Alzheimer’s disease.

Along with Luis Buñuel and Juan Antonio Bardem, Mr. Berlanga was a pioneer of modern cinema in Spain, which developed after the Spanish Civil War in reaction to the dogmatic and often religious-themed films encouraged by the Franco regime: mostly musicals, melodramas and toothless popular comedies.

He and Mr. Bardem (whose nephew is the actor Javier Bardem) helped found the production companies Altamira and Uninci, which in 1961 produced “Viridiana,” Buñuel’s satire of the pious. Buñuel, who had not made a film in Spain since before the war, which began in 1936, was invited back by the Franco regime, but “Viridiana” was banned until after Franco’s death in 1975.

Of Mr. Berlanga’s own films, his most celebrated include his first, “Bienvenido, Mr. Marshall!” (“Welcome, Mr. Marshall!”), a 1952 tale of an Andalusian village making exuberant preparations for what its inhabitants mistakenly believe is the imminent arrival of substantial American financial support under the Marshall Plan, the post-world War II foreign aid program. (Spain was never a beneficiary of the Marshall Plan, officially known as the European Recovery Program.)

Written by Mr. Berlanga, Mr. Bardem and Miguel Mihura and directed by Mr. Berlanga, “Bienvenido, Mr. Marshall!” was a loving if somewhat acid spoof of everything from the Roman Catholic church to Spanish officialdom to the domineering American position in the postwar world. According to the film scholar Steven Marsh, the film was denied an award at the Cannes International Film Festival when a judge, the actor Edward G. Robinson, vetoed it as anti-American.

Mr. Berlanga, who was influenced by the Italian neo-realists, collaborated on several films with the screenwriter Rafael Azcona, including two that are often deemed to be his finest. One, “Plácido” (1961), a Christmas movie with satiric intent about a town in which all the wealthy families agree to invite a poor person to Christmas Eve dinner, was nominated for an Oscar for best foreign-language film.

A second, “El Verdugo” (1963), was a blackly comic story of a young man who inherits the job of state executioner from the father of his new bride. It caused an international stir when the Spanish government, which had recently executed three political opponents, tried to prevent its screening at the Venice Film Festival.

According to Mr. Marsh, Franco himself is said to have weighed in on the controversy, declaring, “Berlanga is not a Communist; he is worse than a Communist, he is a bad Spaniard.” (Though the film’s title translates into English as “The Executioner,” it was called “Not on Your Life” when it was released in the United States in 1965.)

Mr. Berlanga was born into an affluent land-owning family in the Mediterranean coastal province of Valencia on June 12, 1921. His father was a representative in the national parliament who, after the civil war, was arrested and sentenced to death; after fighting against Franco toward the end of the war, young Luis volunteered for a division of Franco’s military in an effort to save his father’s life. (The elder Berlanga’s sentence was commuted. He remained in prison until 1952.)

Mr. Berlanga grew interested in film while studying literature in Madrid, and he enrolled in the state-run film school, where he met Mr. Bardem.

Complete information about Mr. Berlanga’s survivors was not available Monday. The Associated Press reported that he has a surviving son, Fernando. The Guardian of London said his survivors include his wife, María Jesús Manrique, and three sons.

After “El Verdugo,” Mr. Berlanga continued to make films until 1999, including two works starring the French actor Michel Piccoli, “Tamaño Natural” (“Life Size,” 1973) and “París Timbuktú” (1999), his final feature-length film, a picaresque comedy about a man beset by impotence and millennial anxiety who takes off on a bicycle trip from France to Africa, where he intends to kill himself on New Year’s Eve.

“Like all great comics Berlanga’s glancing irreverence has proved unruly and genuinely subversive where more explicit and ideologically motivated cinema often fails,” Mr. Marsh wrote in 2003. He added, “Berlanga’s commitment to ‘the popular’ makes him a kind of utopian, but he is one who has never lost his acerbic eye for the ridiculous aspects of power.”

Luis García Berlanga [Wikipedia]
Posted by Mercury at 6:27 AM