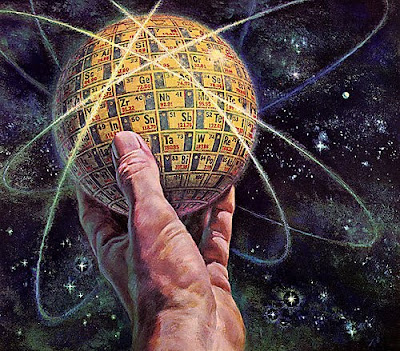 "Trillions of Reasons to Be Excited"

The New York Times
It was late on an August evening when the proton wranglers at the Large Hadron Collider finally got five trillion high-energy particles under control, squeezed and tweaked them into tight bunches and started banging them together.

“Seven minutes too late,” grumbled Darin Acosta, a physicist from the University of Florida, whose shift running a control room here, among sunflower fields and strip malls, had just ended. On the walls around him, computer screens were suddenly blooming with multicolored streaks and curling tracks depicting the primordial subatomic chaos of protons colliding 300 feet under his feet, in the bowels of the Compact Muon Solenoid, one of the four giant particle detectors buried around the collider ring.

A dozen or so physicists crowded around the screens, calling out the names of particles on the fly, trying to guess what others, as yet unknown to physics, were spraying from the mess in the middle, looking to see some sign from the universe. “This is way cool,” one of them said.

“There’s a muon,” somebody else said as a spike darted out and into the void. “There’s a jet.”

“This is good,” said Maria Spiropulu, a CERN and California Institute of Technology physicist. “This is very, very good.”

It has been seven months and some six trillion collisions since physicists at CERN — as the European Organization for Nuclear Research is known — began running protons around their $10 billion, 18-mile electromagnetic racetrack underneath the Swiss-French border outside Geneva and smashing them together in search of new particles and forces of nature. No new particles or forces have yet emerged, at least to the statistical satisfaction of the thousands of men and women now sifting through the debris from those collisions.

Nor, of course, has the world disappeared into a black hole.

The proton collisions are scheduled to end on Wednesday. The machine will collide lead ions later in November and then shut down for the holidays. The collider will resume banging protons in February and run until the end of 2011. But CERN physicists say that data has already been accumulating faster than they can analyze it, and that the collider has already begun to surpass its rival, Fermilab’s Tevatron. “It’s a really beautiful machine. It’s performing far better than I expected,” Lyn Evans, who oversaw the building of the collider, said recently.

In October, at a conference in Split, Croatia, Dr. Spiropulu showed fellow physicists a picture of a collision that could have produced one of the “dark matter” particles that astronomers say make up a quarter of the universe and are among the grand prizes of science these days. It is one of handful of “interesting events” popping out of the collider that could change the world — if in fact they are real.

But high-energy physics is a game of statistics, and one event is just a tantalizing hint, Dr. Spiropulu said. It will take trillions more collisions before physicists can know if events like these are the harbingers of an intellectual revolution in what the universe is made of.

Or if there is any new physics to be discovered in the collider at all.

“The stakes are violently high as we break new grounds,” she said. “We must live up to the dream of 25 years with a lot of seriousness, even if we are like little kids in the candy store with all this data around.”

But for all the euphoria in Geneva these days, the collider is still operating under the cloud of Sept. 19, 2008. That is when the electrical connection between two of the collider’s powerful superconducting electromagnets exploded, turning one sector of the collider ring into a car wreck and shutting down the newly inaugurated machine for more than a year.

As a result, the machine is operating at only half power, at 3.5 trillion electron volts per proton instead of the 7 trillion electron volts for which it was designed, so as not to blow out the delicate splices. At the end of 2011, all the CERN accelerators will shut down for 15 months, so that the suspect splices — some 10,000 of them — can be strengthened and an unknown number of magnets that have mysteriously lost the ability to handle the high currents and produce the high fields needed to run the collider at close to full strength can be “retrained.”

CERN has been under pressure lately to trim its budget, and stopping all the accelerators instead of just the collider will save $25 million, said Rolf Heuer, CERN’s director general.

The collider will start up again in 2013 with proton energies of 6.5 trillion electron volts, but it is not likely to reach full power until 2014, if ever.

In interviews recently, scientists and managers said that they had been too eager to get the collider running at full power in 2008. “In perspective, we may say we started too ambitious,” said Lucio Rossi, a superconductivity expert who joined CERN from the University of Milan in 2001. One reason, in his opinion, was arrogance.

In order to steer protons racing at more than 99 percent the speed of light around the underground track, the collider’s electromagnets have to carry currents of some 12,000 amperes, which they can do only by being cooled by superfluid liquid helium to less than 2 degrees Celsius above absolute zero. At that point, their niobium-titanium wires conduct electricity without resistance. The engineers had been able to cool each of the 10,000 or so superconducting magnets and test them before putting them in the collider, but they could not test the connections between them, Dr. Rossi said.

Those connectors are sandwiches of superconducting wire and copper glued together with solder. The copper is there to take over carrying the enormous current if the superconductor heats up in a so-called quench and loses its superconductivity — but only for the 100 seconds or so that it takes for the magnets to dump their enormous and dangerous energy.

Dr. Rossi said that several reviews had established that the connector design was very good, but those reviews had missed the point that it was not robust against faulty construction, like missing solder, which apparently is what caused the 2008 disaster.

The current had no place to go. Sparks punctured a surrounding vessel of supercold helium, which flooded out, pushing the 30-ton magnets around like toys. Soot spread for two miles along the pipe that carries the proton beams.

“Superconductivity calls for total quality; one mistake will undo the whole system,” Dr. Rossi said. “It becomes a fuse.”

The fix, as described by Dr. Rossi, is fairly simple: an extra set of copper shunts on the outsides of the splices, providing an extra bridge across any divisions or junctions that might lack solder, as well as an improved system to spot trouble and bigger valves to release helium less explosively.

Indeed, undeterred by past disasters, CERN recently laid out plans for the next 20 years of running and upgrading the collider and its detectors, including an idea to swap out all its magnets in 2030 to increase the total proton energies to 33 trillion electron volts — almost as much as the ill-fated American superconducting super collider, a project canceled by Congress in 1993, would have had. The latter suggestion raised eyebrows among physicists in and out of CERN, who wondered, among other things, what it would mean for the International Linear Collider, which has long been presumed to be the next big physics machine.

By the time it shuts down in 2011, the CERN collider should have amassed about 20 times as much data as it now has, enough to make a dent in the Higgs hunt. The lead in that quest currently belongs to the Tevatron, until last year the world’s largest accelerator, which has been colliding protons and antiprotons with energies of a trillion electron volts for the last two decades at the Fermi National Accelerator Laboratory in Batavia, Ill., piling up data. Last summer, Fermilab physicists announced that they had eliminated the region between 158 billion and 175 billion electron volts.

The Tevatron was scheduled to shut down in 2011, but Pier Oddone, Fermilab’s director, recently said he would seek financing to keep the Tevatron running until 2014, by which time it could gather enough data to examine the whole energy range over which the Higgs is or is not hiding. But he said he needed at least $35 million a year to avoid hurting other Fermilab projects. CERN and Fermilab both deny they are in a race to find the Higgs or for predominance in physics.

“Of course we feel a healthy competition with the Tevatron, let’s put it this way,” said Dr. Heuer.

In September Dr. Heuer and Dr. Oddone issued a joint statement deploring what they said was a news media emphasis on competition between the labs, pointing out that Europeans and Americans have worked at one another’s labs and that Fermilab played a major role in constructing the Large Hadron Collider.

“Both CERN and Fermilab directors are committed to supporting each other and the global particle physics community in addressing the most important fundamental questions of our era,” they said.

“The vise is closing in inexorably,” he said of the Higgs. As for dark matter, he said the CERN collider would soon exceed the Tevatron in exploring for new particles: “I can hardly contain my enthusiasm.”

Those sentiments were echoed by Fabiola Gianotti, a CERN physicist and leader of a collaboration of some 3,000 physicists, whose Atlas detector is the prime rival to the Compact Muon Solenoid experiment. The Atlas building is across the street from the entrance to CERN, in Meyrin, Switzerland, and on a late August day the artist Josef Kristofoletti was finishing a giant mural of the Atlas detector that is visible from the surrounding countryside.

Showing off the Atlas control room, Dr. Gianotti said that from the moment the collisions began last spring, she noticed that they were richer, with more particles coming out. That richness is only now beginning to be plumbed.

“We have been waiting so long,” she said. “Only good and beautiful things are coming.”