Swift justice in Iran...Sakineh Mohammadi Ashtiani to be hung today 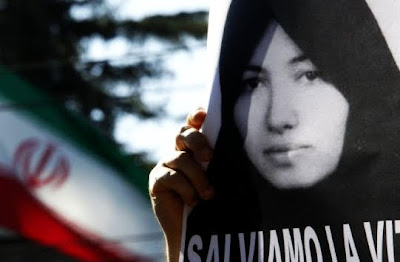 guardian.co.uk
An Iranian woman whose sentence of execution by stoning for adultery provoked a worldwide outcry will instead be hanged for murder on Wednesday, a human rights group has said.

"The authorities in Tehran have given the go-ahead to Tabriz prison for the execution … Sakineh Mohammadi Ashtiani," the International Committee Against Stoning (Icas), a German-based campaign group, said on its website.

"It has been reported that she is to be executed this Wednesday, 3 November."

Officials in Iran were unavailable to confirm or deny the report.

Ashtiani's stoning was suspended after prominent political and religious figures called the sentence "medieval", "barbaric" and "brutal". Brazil, a close ally of Iran's, offered to grant asylum to the 43-year-old mother of two.

A government spokesman said in September that Ashtiani's adultery conviction was under review but the charge of being complicit in the murder of her husband was still pending.

Under the law in force in Iran since the 1979 Islamic revolution, murder is punishable by hanging, and adultery by stoning.

The Iranian president, Mahmoud Ahmadinejad, fended off questions about the case from reporters when he attended the UN general assembly in September, condemning what he called the fabrications of hostile western media and denouncing the US as hypocritical for its capital punishment record.

The case has worsened relations between Iran and the west, which are locked in a dispute over Tehran's nuclear programme and were further complicated last month when two Germans were arrested in Iran while conducting an interview with Ashtiani's son.

The pair entered Iran with tourist visas and were not authorised to act as journalists, judicial officials said. The German government is trying to secure their release.

In August, Iranian television aired an interview with a woman it said was Ashtiani admitting a relationship with a man who had gone on to murder her husband. Icas called the TV show "toxic propaganda".

The US has imposed sanctions on eight senior Iranian officials, including the commander of the Revolutionary Guards and several cabinet ministers, for human rights abuses.

That is in addition to the sanctions over Iran's nuclear activities, which it fears are aimed at making an atomic bomb, something Tehran denies.

According to Amnesty International, Iran is second only to China in the number of executions it carries out, having put to death at least 346 people in 2008.

Enter "Sakineh Mohammadi Ashtiani" in the search engine for more.
Posted by Mercury at 4:23 AM