"A Serbian Film"...censorship for the common good? 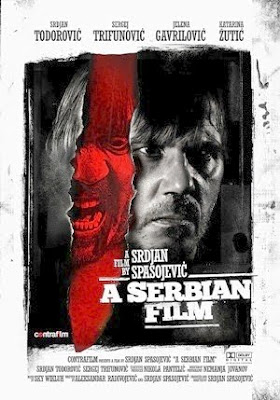 I draw attention to Srđan Spasojević's A Serbian Film...a violent, pornographic film that has been dubbed by The Guardian as the "...most censored film in 16 years". Forget the film and think about the implications of a body of individuals that wish to "protect" the public and affirm a set of ethical standards. This just doesn't make a lot of sense but it is so common around the world. Understand that I have not seen the film and I seriously doubt that I will make any effort to view the film. I have read various accounts of the contents and reviewer's comments. The film is without a doubt extremely violent and pornographic and could probably, as a genre type film, be lumped with August Underground's Mordum and Cannibal Holocaust .

Regardless of the cinematic presentation, one has to question the power wielded by a select group of people that wish to establish some dubious ethical standards. This "art house" horror film will not flow successfully in the economic mainstream of film. It will have a limited theatrical run and make a few bucks, but nothing sustaining and worthy and wind up on film shelves being distributed at budget prices and revered as a cult favorite by a low cadre of horror buffs.

Such press will only stimulate short term interest and fill the treasure box, but long term ethical issues of who decides what we see or read will remain a serious issue of debate. Ethics are situational, aren't they? Just recall the Hayes Office censorship of films in the 1930s...tame by today's standards of ethics.

"A Serbian Film becomes most censored film in 16 years"

The Guardian
A Serbian Film, a violent thriller set in the world of pornography has become the most cut film in 16 years, says the British Board of Film Classification.

Four minutes and 11 seconds were edited out before the board felt able to grant it an 18 certificate, a record exceeded by the Indian film Nammavar in 1994.

The producers argued that the hardcore content was intended as an allegory of "our molestation by the Serbian government".

Taking the torture-porn concept absolutely literally, the bluntly titled "A Serbian Film" is a well-crafted, immensely indecent smut slasher that falls short of the original "Hostel" and "Saw," but still reps a daresay "respectable" go at the genre. Debuting helmer Srdjan Spasojevic's twisted tale of an out-of-work adult film star who (in every way) attaches himself to a deadly new project is also a warning call to budding thesps: Read the whole contract, and don't trust a director who claims that "life, art and blood" are their inspirations. Fanboys will be lapping up the ketchup in fright fests and ancillary.

Though word-of-mouth following its SXSW premiere promised a film that would make "Antichrist" and "Kinatay" look like "Leave it to Beaver," pic is actually heavier on the X-rated side than the gore, and only its final reel of carnage will give hardcore horror fans their due.

Story kicks off as a darkish, fairly entertaining deadpan comedy where Milos (Srdjan Todorovic), described as the "Nikola Tesla of world pornography," is short on cash and pouring himself a tad too many whiskeys. Stuck at home watching his own studded oeuvre, he's urged by his wife (Jelena Gavrilovic) and an S&M-garbed colleague (Katrina Zutic) to get back in the sack and make some dough.

Despite such shock content, which reaches an almost criminal threshold at the very close, the film is not as off-putting as it sounds, and its sleaze-factor is distilled through clever construction, good acting and sleek widescreen lensing.

As for the title, dialogue makes reference to war orphans and the Hague tribunal, but otherwise it seems to be a stab at irony, and clearly one that won't please its homeland.

A Serbian Film [Wikipedia]
Posted by Mercury at 8:09 AM