Dead Dane to be exhumed 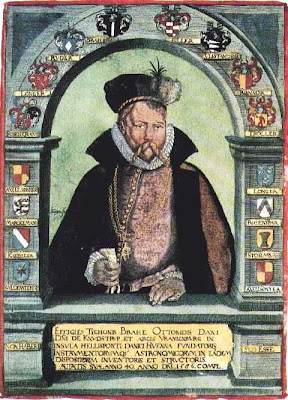 Is this really necessary?

A portrait of Tycho Brahe, thought to have been made around 1600 Was the astronomer murdered? Tests may provide the answer

BBC NEWS
The body of a 16th Century Danish astronomer is being exhumed in Prague to confirm the cause of his death.

Tycho Brahe was a Danish nobleman who served as royal mathematician to the Bohemian Emperor Rudolf II.

He was thought to have died of a bladder infection, but a previous exhumation found traces of mercury in his hair.

A team of Danish and Czech scientists hope to solve the mystery by analysing bone, hair and clothing samples.

Tycho was born Tyge Ottesen Brahe in 1546 in Scania, which at the time was a Danish province, and studied astronomy at the University of Copenhagen, as well as German academic institutions.

He catalogued more than 1,000 new stars and his stellar and planetary observations helped lay the foundations of early modern astronomy.

But the astronomer's fame is partly also due to his personal life.

Our correspondent in Prague, Rob Cameron, says that to describe Tycho Brahe as a colourful character is something of an understatement.

He lost the bridge of his nose in a duel, while at the University of Rostock in 1566, and wore a metal prosthetic for the rest of his life.

Another story widely told about Brahe was that his bladder exploded at a royal banquet.

He was long thought to have died of a bladder infection, which legend suggests was contracted 11 days previously - when he had been too polite to leave the royal banquet table to go to the toilet.

He died in 1601 and was buried at Tyn Church near Prague's Old Town Square.

His body has been exhumed before, in 1901. Tests on a sample of hair from his moustache, taken at that time, have been conducted as recently as the 1990s and indicated unusually high levels of mercury.

Brahe was also an alchemist and some have suggested that he would have handled mercury and may have administered it to himself as medicine.

Others have suggested he was poisoned.

Professor Jens Vellev speaking as the tombstone of Danish astronomer Tycho Brahe is about to be lifted at the Church of Our Lady Before Tyn, Prague 15 November 2010 The scientists will use the latest technology to investigate

In the past, the finger of suspicion has fallen on his assistant, Johannes Kepler, who later became a renowned astronomer himself.

More recently a theory has surfaced that the astronomer was killed on the orders of the Danish king, Christian IV, because Brahe had allegedly had an affair with the king's mother.

Professor Jens Vellev, from Aarhus University, is leading the team of scientists and archaeologists which opened the tomb in Tyn Church on Monday.

He says he hopes to get better samples of hair and bones than were taken in 1901.

The use of the latest technology to test the samples may also help shed more light on the mystery of the astronomer's death, although Professor Vellev is not promising anything.

"Perhaps, we will be able to come close to an answer, but I don't think we will get a final answer to that question," he said.

The scientists also hope to determine what kind of metal Brahe's prosthesis was made of - it was commonly believed to have been gold and silver, but others suggested it might have contained copper.

The team has until Thursday to take the samples needed from the remains of Brahe and his wife, who was buried by his side three years later.

On Friday, their bodies will be reburied after a special mass at the church.

The results of the analysis are not expected to be announced until some time next year.
Posted by Mercury at 5:13 PM