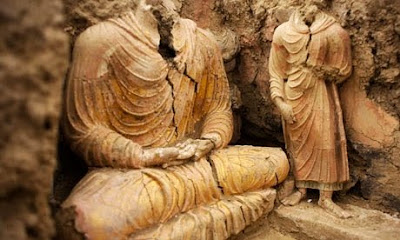 guardian.co.uk
For almost 2,000 years a monastery has perched on a rocky outcrop amid the khaki moonscape of Aynak in Afghanistan. In its heyday a pair of mighty turrets towered over an affluent community of monks who exploited local copper deposits and built beautiful places of worship.

Archaeologists describe it as a site of global historic importance and have in recent months been uncovering intricately constructed mound-like structures called stupas – with vaulted corridor and painted statues, including a magnificent reclining Buddha.

But the monastery, which is about 20 miles from Kabul, is under threat from the land on which it stands. Directly underneath runs a rich vein of copper for which a Chinese state-owned mining company has agreed to pay $3bn (£1.9bn) for the extraction rights.

From what was once a courtyard of stupas on top of the monastery, Afghan archaeologists have a clear view of a modern fortified camp of prefabricated buildings with bright blue roofs and housing Chinese workers and technical experts charged with creating the world's biggest opencast copper mine.

The project, and several others like it, will bring significant revenue to one of the world's poorest countries. But the mine will also threatens to destroy yet more of Afghanistan's rich archaeological history, which has already been ravaged by years of civil conflict, puritanical leaders and unscrupulous antiquities hunters.

"It is very shameful for the Afghan government to let the Chinese come here and destroy our history," said Abdul Khalid, one of the archaeologists. "People around the world only hear of the war in Afghanistan but they do not know that we have the best of things from our forefathers."

For him what the Chinese have to offer is beside the point: "It will all just be wasted any way. Much more money comes from foreign countries now than will come from this mine but nothing has improved."

Philippe Marquis, from the French archaeological delegation in Afghanistan (DAFA), which is assisting the Afghan-led dig, said: "The people need to know more about their own history. If they did that then perhaps people would not think that Afghanistan is a doomed country. This site shows how rich it once was and that during parts of its history a powerful country that was able to do great things."

The argument is unlikely to impress an Afghan government eager for a copper bounty. When production starts in six years, the government should receive about £250m a year in direct payments; the total benefit to the Afghan economy is estimated at £745m, or 10% of current GDP.

It is unlikely that the monastery, which is Helmand province, will survive, nor the 12 other Buddhist sites that have been discovered in the area in the past year.

One option is to move much of the archaeological material, some to a new museum to be built in nearby Logar and some to the rebuilt national museum in Kabul.

Unfortunately, the statues of Buddha will have to be displayed without their heads, which have been hacked off and sold on the illegal international antiquities market.

The site was ransacked some time in 2002, when well-organised thieves took advantage of the power vacuum following the fall of the Taliban. Less than 2% of what was taken has been recovered.

The ground is still littered with tubes of the superglue that the thieves, rumoured to be important local officials, used to try to keep the fragile clay statues together as they were pulled through holes bored into the then yet to be excavated mound.

The remains, which include fragments of once extensive city walls, are testimony to the immense wealth the ancient settlement once generated from copper. The surrounding hillsides are littered with slag piles of black, pock-marked stones.

Marquis says the metal was probably used to mint coins and that production halted only when all the available trees had been cut down for fuel.

Today Chinese projects will not only transform the area but also Afghanistan. Not only has China committed itself to building two electricity generating plants, it is also creating two rail lines in a country that has never had a rail network.

In an area where insurgency is strong, the Afghan government has already invested heavily in security. That included recruiting 1,500 policemen to guard the perimeter of the site; previously there had only been 750 officers for the entire province.

Wahidullah Shahrani, Afghanistan's mining minister, said everything is being done to protect the monuments.

Marquis hopes the government is beginning to think about cultural as well as economic potential to the country.

"This mine is going to be a test," he said. "Is it possible to develop this country and also preserve its history?"
Posted by Mercury at 5:21 PM