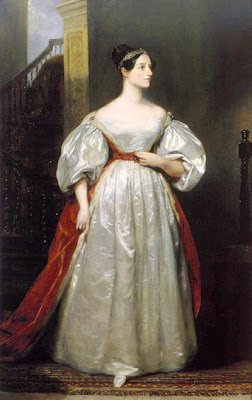 Analyst, Metaphysician, and Founder of Scientific Computing
Ada Byron was the daughter of a brief marriage between the Romantic poet Lord Byron and Anne Isabelle Milbanke, who separated from Byron just a month after Ada was born. Four months later, Byron left England forever. Ada never met her father (who died in Greece in 1823) and was raised by her mother, Lady Byron. Her life was an apotheosis of struggle between emotion and reason, subjectivism and objectivism, poetics and mathematics, ill health and bursts of energy.

Lady Byron wished her daughter to be unlike her poetical father, and she saw to it that Ada received tutoring in mathematics and music, as disciplines to counter dangerous poetic tendencies. But Ada's complex inheritance became apparent as early as 1828, when she produced the design for a flying machine. It was mathematics that gave her life its wings.

Lady Byron and Ada moved in an elite London society, one in which gentlemen not members of the clergy or occupied with politics or the affairs of a regiment were quite likely to spend their time and fortunes pursuing botany, geology, or astronomy. In the early nineteenth century there were no "professional" scientists (indeed, the word "scientist" was only coined by William Whewell in 1836)--but the participation of noblewomen in intellectual pursuits was not widely encouraged.

One of the gentlemanly scientists of the era was to become Ada's lifelong friend. Charles Babbage, Lucasian professor of mathematics at Cambridge, was known as the inventor of the Difference Engine, an elaborate calculating machine that operated by the method of finite differences. Ada met Babbage in 1833, when she was just 17, and they began a voluminous correspondence on the topics of mathematics, logic, and ultimately all subjects.

In 1835, Ada married William King, ten years her senior, and when King inherited a noble title in 1838, they became the Earl and Countess of Lovelace. Ada had three children. The family and its fortunes were very much directed by Lady Byron, whose domineering was rarely opposed by King.

Babbage had made plans in 1834 for a new kind of calculating machine (although the Difference Engine was not finished), an Analytical Engine. His Parliamentary sponsors refused to support a second machine with the first unfinished, but Babbage found sympathy for his new project abroad. In 1842, an Italian mathematician, Louis Menebrea, published a memoir in French on the subject of the Analytical Engine. Babbage enlisted Ada as translator for the memoir, and during a nine-month period in 1842-43, she worked feverishly on the article and a set of Notes she appended to it. These are the source of her enduring fame.

Ada called herself "an Analyst (& Metaphysician)," and the combination was put to use in the Notes. She understood the plans for the device as well as Babbage but was better at articulating its promise. She rightly saw it as what we would call a general-purpose computer. It was suited for "developping [sic] and tabulating any function whatever. . . the engine [is] the material expression of any indefinite function of any degree of generality and complexity." Her Notes anticipate future developments, including computer-generated music.

Ada died of cancer in 1852, at the age of 37, and was buried beside the father she never knew. Her contributions to science were resurrected only recently, but many new biographies attest to the fascination of Babbage's "Enchantress of Numbers." 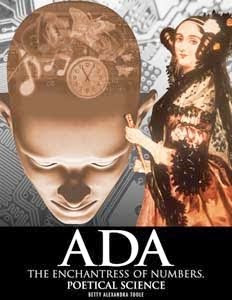 As the author of "Ada, The Enchantress of Numbers, now an e-book with the subtitle Poetical Science I am delighted with you post. Ada considered herself "An Analyst and metaphysician" which fits perfectly your philosophy and science,

Yep, I was going to add that and I don't know why I didn't.