Which Christmas tree is "greener"--ask Lassie 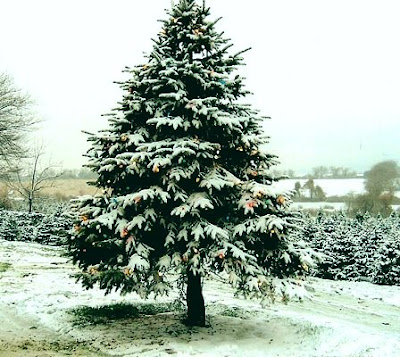 "Should I Buy a Fake Fir? Or is it better for the environment to cut down a real Christmas tree?"

Slate
Please help settle an argument that's threatening to tear my family apart this holiday season: What's worse for the environment, a real Christmas tree that lasts just a few weeks, or an artificial one that we can haul out every December for the next 15 years?

Read the rest of the article...

[Interesting to note that within the past three seasons, I have seen less Christmas tree stands. Usually, they would populate a section of hardware and grocery store parking lots and operated by charitable organizations like Kiwanis, Knights of Columbus, Rotary Club, and Salvation Army. I don't know if people's attitudes are changing about Christmas trees or economics--they have become expensive. I have seen none so far this year.]

And speaking of Christmas trees, there used to be an event that happened about twelve days after Christmas termed the Twelve Days of Christmas and culminates in Epiphany. It was associated with the burning of Christmas trees at many local parks. Minus the religious implications, it was quite exhilarating to gather with family and friends on a bitter cold January night warmed by the bonfire and thrilled when the turpentine in the Christmas trees reached its flash point and literally exploded--chemistry at Christmas. But now, the tradition is long gone and banned for environmental reasons.

Curiously, there is a vocabulary lesson here for Epiphany, meaning a burst of light via the visitation of Magi, and in common parlance a moment of sudden understanding or revelation; an illuminating discovery.

And from USA Today...

USA TODAY
Americans don't seem ready to give up their Christmas trees amid a slumping economy, but they are downsizing to save money.

As unemployment hit a 14-year high and retail sales dip to the lowest in 35 years, Christmas tree sales are holding steady in the gloom, according to growers, sellers and industry analysts.

Chal Landgren, professor of forestry at Oregon State University, says Americans are buying smaller, cheaper trees. He expects sales to be in line with last year, based on reports from growers.

"The year may end up the same or even a little better than last year," says Jeff Owen, who works with growers and is based at North Carolina State University's College of Natural Resources. North Carolina, which sold more than 5 million Christmas trees last year, is the second-largest grower behind Oregon, which sold 7 million.

"Consumers want to keep the tradition, even if other things go by the wayside," says Linda Gragg, executive director of the North Carolina Christmas Tree Association.

Linda Holt bought a tree this year even though she lost her job last year repairing speech devices for the hearing-impaired. Her unemployment checks ran out in March. "I can't imagine Christmas without a tree," says Holt, 52, who lives with her daughter's family in San Jose. "It's too depressing."

Instead, she's only buying half the presents she planned, and her family went for a smaller tree, a 4½-footer that cost $34.

In North Carolina, Owen says, retailers ordered fewer trees from growers because of the economy, then ran out and had to order more.

Artificial trees are selling, too, although consumers are buying cheaper ones, says Thomas Harman, director of the American Christmas Tree Association, which represents the artificial-tree industry. He says his business, Balsam Hill in Redwood City, Calif., is selling as many trees as last year, though revenue is down about 10% because customers are spending less on them. He estimates Americans buy 10 million artificial trees annually.

At Big John's Christmas Trees in Atlanta, business fell 11% from last year, says owner Jimmy Livaditis. He blames the economy and the shorter period between Thanksgiving and Christmas but expects a boost as people who can't afford to travel prepare for the holidays. "They'll concentrate on home, gather around and get the warm-and-fuzzies," he says.