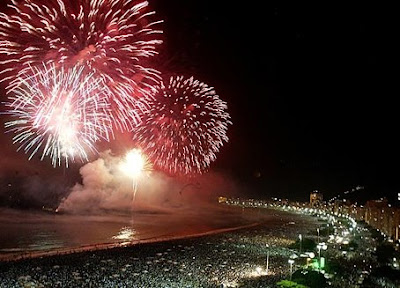 Better than watching a ball drop in New York city. Take a trip to Rio [not Natal] and celebrate the new year with the detonation of more than 24 tons of explosives. The theme: "The traditional New Year fireworks show at Rio's famous Copacabana Beach will promote the 2009 International Year of Astronomy...."

The date was set to pay homage to Italian astronomer Galileo Gallilei.

According to Riotur's Operations Director Bruno Matos, the show will stage fireworks in several astronomy-related shapes, such as stars, comets and planets.

The show, which is set to last 20 minutes, is expected to spend over 24 tons of explosives and 19,600 bombs

"It will be the most beautiful fireworks display ever seen at Copacabana Beach," said Matos.

Some 2 million people are expected to watch the show at the Copacabana Beach. They will also enjoy concerts and samba school performances.

According to Matos, three emergency spots and 24 mobile Intensive Care Units (ICU) will be placed at the beach to offer help in case anyone gets injured.

Some 4,000 police officers will be deployed there, local media reported.

Five other fireworks shows will be also staged in the city, and a total of 15,000 police officers will be deployed during the New Year festivities.


International Year of Astronomy 2009...gaining momentum
Posted by Mercury at 6:24 AM