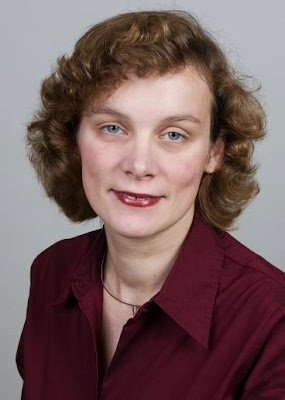 Anastasia Volovich, the Richard and Edna Salomon Assistant Professor of Physics, has been named one of this year's winners of the Presidential Early Career Awards for Scientists and Engineers. She was honored at a White House ceremony Friday, Dec. 19, 2008.

"I am very honored to have received this award, and I am especially excited that my research and my research group have been acknowledged in this way," Volovich said.

Volovich joined the Brown faculty in 2006, after earning her Ph.D. in theoretical physics from Harvard University. She works in theoretical physics, string theory and related areas in particle physics and general relativity. String theory is the search for a single explanation that describes all the laws in the known universe. The theory's main idea is that all matter and forces are made of tiny strands of energy that vibrate in different patterns.

Physicists have never seen these strands in nature, but they hope that they may see a hint that string theory is correct when the Large Hadron Collider, the world's biggest particle accelerator, is fired up this summer.

Volovich said her work with a calculational tool known as quantum chronodynamics will help scientists interpret the stream of experimental results expected from the super collider, which is located outside Geneva, Switzerland. The award committee recognized her role in analyzing the data from the LHC as well as for organizing a science Olympiad for high school students.

Chung-I Tan, chair of the physics department at Brown, praised Volovich's selection as a PECASE recipient.

"Anastasia has demonstrated not only impressive skills as a physicist but also enthusiasm and talent in teaching at the graduate and undergraduate levels," Tan said.

"We take great pride in the PECASE winners," said Kathie L. Olsen, NSF's deputy director. "It is important to support the transformational research of these beginning scientists, and to foster their work in educational outreach and mentoring."
Posted by Mercury at 8:28 AM