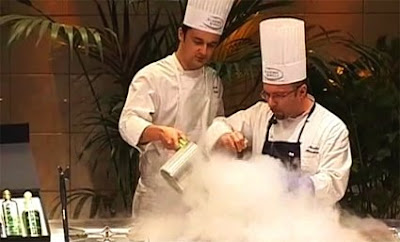 Using liquid nitrogen to prepare culinary delights is a far cry from the Happy Meal. Have we become jaded in food preparation? Maybe the simple delights of a meat and potato meal are sufficient.

"The Food Hacker Taking Kitchens to the Future with Science"

Every art needs its scientist. Now cooking has its own. Get ready for the next generation of food to make your head hurt.

Esquire
You're thirsty. You have just tried a crunchy handful of one of Dave Arnold's edible experiments--homemade pork rinds that taste like fatty Cracker Jacks--and now you'd like something to wash it down with. The easy thing to do would be to pour a cup of tap water from the chrome dispenser in this classroom at the French Culinary Institute, where Arnold runs the culinary-technology program. But that would not be a very Dave Arnold way of getting a glass of water.

Instead, he snatches the cup from your hand and hurries to a closet-sized room containing two industrial gas tanks--carbon dioxide and nitrous oxide. One of his lab techs connects the gas mixer's rubber hose to one end of a two-liter bottle filled with New York City tap and begins to inject the water with gas. Arnold takes a sip, makes a dissatisfied face, adjusts the ratio of nitrous to carbon dioxide, and hands over a homemade carbonated water that is soft, creamy, and sweet. That is the Dave Arnold way of getting a glass of water.

Over the past two decades, chefs who rely on science to push the boundaries of cooking have had a huge impact on the world's fine-dining scene. Arnold is their enabler. As cooking science has grown more sophisticated, standard kitchen equipment and techniques just don't do the trick. That's why FCI, a school with roots in traditional cooking and techniques, has built a whole new department around Arnold--a tireless inventor and experimenter who the school believes will not only develop new techniques but also make FCI the intellectual epicenter for this kind of cuisine.

"There's no reason you can't mess with anything and everything," says Arnold, as he manically checks on one of several experiments he has in progress. But he stresses that there's no reason to mess with things if the end result won't be better than the original. "When you create a goddamned delicious product that you can't make in any other way, and it's not just a gimmick, that's when we win," he says.

Although Arnold, thirty-seven, is frequently consulted by the world's most avant-garde chefs--Momofuku's David Chang, Jean Georges's Johnny Iuzzini, and especially WD-50's Wylie Dufresne--he has had no formal culinary training himself. His degree from Yale is in philosophy, and he has an M.F.A. from Columbia. But he's always had an innate mechanical ability and a deep passion for cooking and food history. So one night at WD-50, Arnold introduced himself to Dufresne, and the two discovered a mutual obsessive interest in pushing the technical aspects of cooking. They began an informal collaboration that would eventually lead Arnold to FCI, where he now finds himself teaching students how to operate a rotary evaporator.

Currently the evaporator holds a flask filled with vodka that's blended with enough habanero pepper to kill a man. When the machine is turned on, the alcohol gradually evaporates and collects in another container, taking the habanero flavor with it but leaving the color and severe heat behind. The result is crystal-clear booze that tastes like habanero pepper--deep and smoky--but without any of the habanero burn.

Arnold decides to mix the habanero vodka with ice cubes made of clarified apple juice and garnish it with a cucumber infused with lime. Then he fills an insulated bucket with liquid nitrogen (temperature: --320 degrees), reminds his guests to lower their safety goggles, dips a glass in by its stem, and pulls it out so cold it's smoking. That is the Dave Arnold way to chill a cocktail glass.