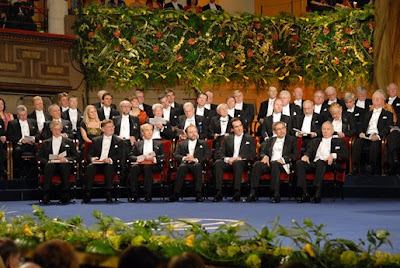 The head of the Nobel Foundation on Tuesday rejected criticism against all-expenses-paid trips that prize jurors made to China and said it was "normal" for them to accept such invitations.

Michael Sohlman, executive director of the foundation that manages the prestigious awards, told The Associated Press he welcomed a bribery investigation into the trips, adding he didn't see anything wrong with the visits.

"When you invite a lecturer it is normal to pay for travel and board," Sohlman said in a phone interview. "The Nobel Foundation cannot finance such trips."

An anti-corruption prosecutor opened a bribery probe last week following a Swedish Radio report that said three jurors from the medicine, chemistry and physics committees were invited to China in 2006 and 2008 to explain the selection process and what it takes to win a Nobel Prize. Chinese authorities paid for their plane tickets, hotels and meals, the report said.

"It happens very often that someone who is linked to the Nobels goes abroad and then they are often asked to talk about the system of awarding the Nobel Prize," Sohlman said.

The 10 million kronor ($1.2 million) Nobel awards are handed out annually in six disciplines: medicine, chemistry, physics, literature, economics and peace. Each award has its own prize committee.

The committees are famously tightlipped about their work — deliberations are kept secret for 50 years — and purport to resist outside pressure or public campaigns for or against a certain candidate.

With that in mind, critics say the China visits were inappropriate even if they don't lead to any criminal charges.

"It is insane to let oneself be invited on trips of this kind," said Anders Barany, a former nonvoting secretary of the physics prize committee, and a current voting member of the Royal Swedish Academy of Sciences.

He was a vocal critic of a similar trip in 2002 in which he and other Nobel officials traveled to Japan to attend the opening of a traveling exhibit from Stockholm's Nobel Museum. Letting the hosts pay for the visit was problematic, he said, because Japan had a stated goal of winning more Nobel Prizes.

"I don't think there's direct link in the sense that someone feels that we have to thank Japan and give them a laureate," he said. However, he added that if committees must choose between several equal candidates, "small psychological effects" can influence the decision.

"I've repeated this constantly, but the Nobel system doesn't want to listen to me yet, and I think it's a scandal," Barany said.

Sohlman said it would be an "absurdity" to suggest that the Japan visit would have an effect on the prizes.

Prosecutor Nils-Erik Schultz told AP his probe would focus on the China trips and not the Japan visit because there is a five-year statute of limitations for bribery investigations in Sweden. He said he expects to contact Chinese authorities to find out more about the purpose of the visits.

Chinese media reports at the time said the three Nobel jurors gave lectures on the process of nominating and selecting Nobel winners.

One of them — Sven Lidin of the physics committee — said in a speech that "China and the Nobel Prizes are not far apart" and that it would not take very long for a Chinese scientist to win a Nobel, according to a report by the state-run China News Service, posted on the Zhejiang university's Web site.

Lidin declined to comment, citing the ongoing investigation. But he said he welcomed the probe "so that this is cleared up."

Schultz said his investigation would also examine whether drug maker Astra Zeneca had any inappropriate links to the prizes. Swedish Radio reported that the company sponsors Web site producer Nobel Web and Nobel Media, which manages the television rights for the awards, and that one of the medicine prize committee members also is a board member at Astra Zeneca.

The key is to find out whether there had been any attempts to influence the decision-making process because "one expects that this is handled objectively to 100 percent," Schultz said.

If charged and convicted, the jurors would face fines or up to two years in prison.

Gunnar Oquist, permanent secretary of the Royal Swedish Academy of Sciences, which awards the prizes in physics, chemistry and economics, expressed regret about the China trips, noting that they were not organized by the academy.

Oquist said he only knew about the 2006 trip and that he had thought it was to focus on scientific prizes in general, not just the Nobels.

"The only thing I wanted to make sure was that it wouldn't become a Nobel trip, so to speak. Now, that's what it turned into anyway because the Chinese made a very big deal about it," Oquist said. "There was more of a Nobel focus than one had expected."

The academy has a verbal policy on not getting into situations representing a conflict of interest, but Oquist suggested it was time to lay down more specific guidelines "after what has happened."

"I do not think it is right to have an absolute ban on letting the organizers pay such trips," he said. "That would be impractical and expensive."

Lundestad said the Nobel Foundation decided at a board meeting last Friday how the Nobel Prize committees should handle financing for their trips in the future.

Sohlman confirmed there was a regular board meeting on Friday in Stockholm, but declined to say what was discussed because the foundation is private.

He called the extensive media coverage of the trips "ridiculous" and said that he himself has accepted several invitations to give lectures about the awards in France, the United States, South Korea and Japan.


Nobel Prize jurors and ethics
Posted by Mercury at 12:09 PM