Shot ourselves in the foot?--space debris 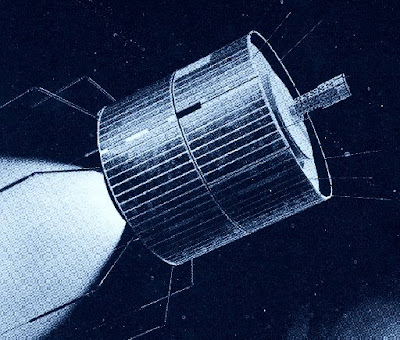 ATS 3
Quality engineering and high technology in the satellite business has come with some unexpected woes--longevity and a down turn in satellite demand and production...and space junk.

"With vintage satellites still in orbit, sales are grounded"

Their longevity surprises manufacturers but is bad for business. Upon retirement, they join the mass of space junk.

The Los Angeles Times
If only cars could last so long.

This month, a satellite resembling a shiny spinning drum and orbiting 21,156 miles above Earth celebrated its 41st birthday, astounding engineers and scientists, some of them the children of those who built it.

For years, the satellite has served as an emergency communications link for rescue operations, including the 1985 Mexico City earthquake and the 1980 Mt. St. Helens volcanic eruption. It was supposed to live for only three years when it was launched in 1967. That's when Lyndon B. Johnson was president and bell-bottom pants were the rage.

But the spacecraft, known as ATS 3, isn't alone. Many satellites are operating well past their life expectancy, so much so that manufacturers are hurting from lack of demand for new, replacement satellites.

And those who are buying are asking for guarantees that the new satellites, which can cost as much as $300 million each, will last two to three times as long as the early birds.

"It's a mixed blessing," said John S. Edwards, a space industry analyst for Forecast International. "It says great things about your product, but the satellite-making business is floundering because there are hardly any sales."

Engineers at Boeing Co.'s sprawling satellite-making plant in El Segundo know about the sales drought only too well.

Of the 245 Boeing satellites that have been launched into service, 166 have exceeded their design life. That's more than two-thirds of the spacecraft built at the facility since the 1960s. A third of all satellites have lasted at least twice as long as expected.

That has been the bane of the sales department. With the telecom bust early this decade and consolidation in the satellite services industry, Boeing has sold only one commercial satellite this year. In the late-1990s boom years, it was tallying a dozen orders annually.

Some satellites are living longer because the initial estimates of their longevity were conservative, but many have operated well beyond even the wildest expectations.

"In designing them, we had to take into account all the worst-case scenarios," said Art Rosales, Boeing's director of commercial and civil satellite services and a 29-year veteran of the satellite business. Because most satellites can't be repaired once they're in space, every contingency was considered.

"The worst cases didn't happen, and that has translated to longer life," he said.

Last month, a satellite that was providing an Internet connection for scientists at the South Pole was retired, more than three decades after it went into service. It was designed for a life span of five years.

The satellite's longevity "has been truly remarkable," said Kay Sears, president of a government services subsidiary of Intelsat Ltd., a satellite operator. "No one could have ever imagined that its power supply and batteries could have lasted this long."

In retiring the Marisat F2 satellite last month, Intelsat used up the remaining fuel on board to move it about 125 miles away from its original orbit so it would stay out of the way of other geosynchronous satellites before its power was shut off for good.

So-called GEO satellites orbit at the same speed as the Earth's rate of rotation, allowing them to remain stationary relative to the ground. They are often used for communications, like giant radio transmission towers relaying signals from one place on Earth to another.

There are an estimated 800 active satellites, including those built for secret military operations.

With satellites operating much longer than anticipated, customers are expecting more from the new generation of birds, which has led to headline-grabbing setbacks.

Boeing suffered a $1-billion loss a few years ago, after technical problems delayed the delivery of new, more powerful satellites. Some take up to 18 months to build.

The expected life span of the early generation was three to four years. In succeeding generations those expectations rose to seven to eight years and then 10 to 12 years.

"Nowadays, the standard design life is 15 years and everybody expects them to last over 20 years," said Marco A. Caceras, senior space analyst for the aerospace research firm Teal Group Corp.

With even older satellites lasting more than 20 years, some engineers have become emotionally attached to them.

"It's like raising children. They have tantrums and fits," said Erika Roesler-Wong, regional manager for Boeing's customer operations support center in El Segundo, where she helps satellite owners trouble-shoot problems. She's kept an eye on some satellites for nearly 20 years.

When they have to be retired -- many are turned off because they're running out of fuel needed to keep them in a specific orbit -- Roesler-Wong gets a bit choked up.

"It is sad," she said. "But you need to get over it because there are other children around."

Launched in November 1967, the ATS-3 was still in service more than 28 years later, as of 1995. Among its widest-known achievements are the first full-disk, colour Earth images transmitted from a satellite. Its imaging capability has served during disaster situations, from the Mexico earthquake to the Mount St. Helens eruption. ATS-3 experiments included VHF and C-band communications, a color spin-scan camera, an image dissector camera, a mechanically despun antenna, resistojet thrusters, hydrazine propulsion, optical surface experiments, and the measurement of the electron content of the ionosphere and magnetosphere. Because of failures in the hydrogen peroxide systems on ATS-1, ATS-3 was equipped with a hydrazine propulsion system. Its success led to its incorporation on ATS-4 and ATS-5 as the sole propulsion system.--Wikipedia