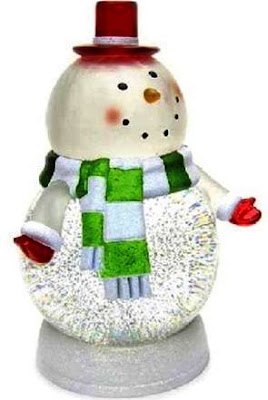 Reuters
Some 7,000 jumbo-sized snow globes were recalled by Hallmark Cards Inc. because the holiday decorations can act as a magnifying glass when exposed to sunlight and ignite nearby combustible materials, the U.S. Consumer Product Safety Commission said on Tuesday.

The snowman-shaped snow globes were sold in October and November at Hallmark Gold Crown stores nationwide for about $100 each.

The consumer agency said Hallmark has received two reports of the snow globes igniting nearby materials but no injuries have been reported.

Consumers who bought the snow globes, which measure 11 by 12 by 17 inches (28 by 30 by 43cm), should immediately remove them from exposure to sunlight and return to a Hallmark Gold Crown store for a full refund.
Posted by Mercury at 5:38 AM