Lawrence H. Summers is in and scrutinized 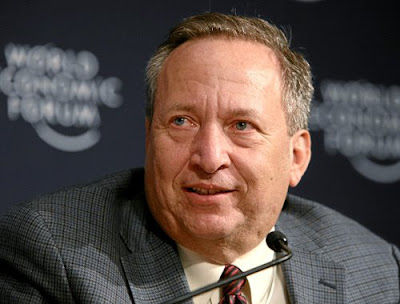 A checkered and questionable background at Harvard...this is the first salvo facing Mr. Summers...economic revival should not overshadow Mr. Summers' academic rhetoric at Harvard.

The New York Times
One quiet Friday in June 2006, Lawrence H. Summers ended his turbulent tenure as president of Harvard University. Few of the undergraduates for whom Mr. Summers, a former Treasury secretary, used to sign dollar bills were around. Most of his staff, including his driver, had been reassigned. Soon, even the burger with his name was off the menu at Mr. Bartley's in Harvard Square.

Now, Mr. Summers will have a job as the top White House economic adviser to Barack Obama. American economic policy will be spearheaded in what many call the worst environment since the Great Depression in part by a man whose last full-time role ended in forced resignation.

The two men, who have forged their relationship in the tumult of the financial crisis, share a lot: Harvard, a love of debate and firm convictions, like agreement on the need to narrow the gap between America's most fortunate and everyone else. But they are also an odd couple: the serene, slender politician who seems to win people over effortlessly and the impatient, acerbic bear of a man who seems to offend them just as easily.

Aides to President-elect Obama say a top administration role for Mr. Summers once would have seemed to be a remote possibility because of his controversial tenure at Harvard, during which he angered women and members of the faculty.

From the moment he stepped down, Mr. Summers, advised by powerful supporters who said he had been unfairly maligned, worked hard at repairing his reputation. He defended his time at Harvard but admitted mistakes; wrote a column that repositioned him politically and predicted the coming trauma; helped build a research group that supplied Mr. Obama with economic ideas and aides; and strengthened ties to women who helped dispel the accusation — stemming from a talk in 2005 in which Mr. Summers wondered out loud about a relative lack of women in top academic science and engineering posts — that he thought poorly of their scientific abilities. He helped practically anyone who asked for advice, like undergraduates, economists and candidates.

But it was the financial crisis, or a series of phone calls about it, that almost instantly resuscitated Mr. Summers's career.

Starting last summer, as economics came to the forefront of the presidential campaign, Mr. Obama faced constant decisions on the subject. Mr. Summers’s allies in the campaign put Mr. Summers on the phone, giving him a key task: to synthesize the developments for Mr. Obama. Mr. Summers made himself into an essential guide, Obama aides say, and earned a place in the administration.

As the head of the National Economic Council, he will play two roles: counseling the president and nurturing the proposals of others. Few doubt that Mr. Summers will excel in the first; Democrats and Republicans call him one of the top economic minds in the country, with a résumé that may make him overqualified for the job.

Even Mr. Summers's allies, though, acknowledge worries about the second part of his role. Mr. Summers, in an interview, said a crucial part of the job was exposing the president "to all possible views, developed as strongly and rigorously as they can be."

But at Harvard, numerous faculty members and administrators say, Mr. Summers's downfall resulted chiefly from his tendency to impose rather than persuade, to appear to have little regard for the views of others.

"He's going to have to ensure that he does not stifle debate or intimidate people," said Roger Porter, a colleague at the Harvard Kennedy School and a former adviser to three presidents, who is otherwise confident about Mr. Summers's performance.

David Gergen, also a Harvard Kennedy School professor and White House veteran, asked: "Will it all be tea and cookies in there with Larry? Of course not, but it shouldn't be."

After his five-year Harvard presidency, Mr. Summers at first seemed to have trouble letting go, colleagues and staff members say. He was on sabbatical but still roamed campus, especially the residential houses and pizza parties of undergraduates, who adored him so much they gave him a standing ovation at the graduation next year. He tried to fashion himself into an authority on reform of higher education, starting a book and giving blistering talks that amounted to a defense of his leadership.

Mr. Summers had recently married Elisa New, an English professor, and he bought a 6,500-square foot house and took up golf. "I had been in positions for 15 years when I had a full schedule for every day and a briefing book," he said, "and I wanted for some interval to have a flexible and freer life."

Friends, including Mr. Gergen, who had deployed his crisis management skills to try to save Mr. Summers's presidency, and Robert E. Rubin, Mr. Summers's predecessor as Treasury secretary and a longtime champion, told him he still had a big contribution to make. Return to your first love, economics, some recalled saying. Forget education reform. And make sure people know you are no misogynist.

Mr. Summers counseled Speaker Nancy Pelosi, the highest-ranking woman in elected office in American history, who drew him into economic advisory meetings. From the end of his presidency, the many women among his friends fanned out to defend his name.

"Quite a number of us who are women and relished working with Larry" thought he had been given a "bum rap," said Elena Kagan, whom Mr. Summers had appointed as law school dean.

As he took on projects, collaborators enjoyed the very qualities that had made the Harvard faculty seethe: for instance, his eagerness to delve into matters that seemed small for someone of his stature.

He became a co-editor of the Brookings Papers on Economic Activity, helping revive the once-vibrant journal. He took on a lucrative part-time role at D. E. Shaw & Company, a investment firm, spending a day or two a week in New York. He joined the board of Teach for America, which promotes equality in education. In interviews, people from all three organizations marveled at Mr. Summers's capacity for involvement even in minor affairs.

"The small strategic decisions add up to the whole ballgame," said Wendy Kopp, founder of Teach for America.

Around the time Mr. Summers resigned, Mr. Rubin started a small research group called the Hamilton Project and housed at the Brookings Institution, to foster new economic policy ideas. Mr. Summers threw himself into it. Asked to review papers by outside authors, he would return them with extensive comments, said Jason Furman, the former project director and chief economic adviser in the Obama campaign. "He didn't just want to sit on the board and speak at the event," said Mr. Furman, who served in the Clinton administration when Mr. Summers was Treasury secretary.

For someone said to be poor at reading others, Mr. Summers has often displayed keen political instincts; after the Sept. 11, 2001, attacks, he had urged Harvard students to support the government and spoke out in support of its embattled R.O.T.C. chapter. Now, struck by the harsh consequences of globalization and income stagnation even among college graduates, Mr. Summers, known as a centrist as Treasury secretary, moved left, and in a very public forum.

Chrystia Freeland, a former student who had become editor at the Financial Times, asked him to write a monthly column that became such an attraction that the paper soon promoted it with his picture atop the front page. Mr. Summers offered prescriptions for the deepening economic trouble including huge fiscal stimulus and measures to prevent unnecessary foreclosures. A primary theme of his column was that too many people were falling behind, a point he cast in political as well as economic terms.

"In order to keep public support for open markets, you had to do more for the disadvantaged and the losers in globalization," as Stuart E. Eizenstat, Mr. Summers's former deputy at the Treasury Department, put it.

Introducing Mr. Obama at a reunion for black alumni of Harvard Law School, Mr. Summers drew chuckles as he stumbled through several iterations, finally settling on "BARE-ack." The two men, intrigued by each other, stole away to talk privately, Mr. Ogletree said.

In the presidential primaries, most Clinton veterans stuck with their home team candidate, but Mr. Summers stayed neutral. Later, as the Obama campaign swallowed people and ideas from the Hamilton Project, he became involved, too, impressing aides with his willingness to do anything they asked, whether editing policy proposal or making television appearances.

"I could tell, just being on the call," Mr. Rubin said, "Obama got used to Larry bringing it all together."

Mr. Obama sometimes asked questions other advisers struggled to answer, but Mr. Summers always seemed to provide new detail or analysis, making gracious references to the points of others.

Asked before Election Day if Mr. Summers would consider an administration role, friends joked that he had already bought airline tickets for his job interview.

For the position of Treasury secretary, the transition team had two finalists: Mr. Summers and Timothy F. Geithner, who had worked under him at the Treasury Department. "Either way it would have made sense," Mr. Rubin said.

Obama advisers name several reasons for the job assignments: Mr. Geithner is a fresh face. Mr. Summers's job gives him a broader policy arena and a chance to do what he does best: debate ideas. He also avoids confirmation hearings, which could dredge up unpleasantness related to his Harvard tenure.

When the jobs were announced, economists speculated on what the relationship between Mr. Summers and Mr. Geithner would be, now that the latter has the more prestigious title.

But in recent transition meetings, as in the Clinton administration, the two have seemed to trust and enjoy wrangling with each other, one aide said. Mr. Rubin said of Mr. Summers that in general he was "very aware of the criticism and very focused on making sure it works."

And some predict that Mr. Obama's style could mellow that of Mr. Summers.

Laurence Tribe, a Harvard law professor, said Mr. Obama's "affability and inclusiveness might help nurture those same qualities in Larry, even though those haven't been among Larry’s notable strengths."

He may be better matched with fellow economists than he was with Harvard's faculty, say colleagues, and with an advisory role rather than an executive one. As a participant in debates of the National Economic Council in the 1990s, "he was a great team player, he was loved and was very respectful of the back and forth," said Gene Sperling, who led the council under Bill Clinton.

The term of Ben S. Bernanke, chairman of the Federal Reserve, expires in January 2010, and some members of the Obama team predict that if Mr. Summers performs well, the job could be his. It requires confirmation, but with every passing day, say friends, Cambridge recedes further into the distance.

"Now, who talks about Harvard?" Mr. Eizenstat, the former deputy Treasury secretary, said. "It's a thing of the past, a little blip on the radar screen."


Lawrence H. Summers...remember him?
Posted by Mercury at 3:28 PM