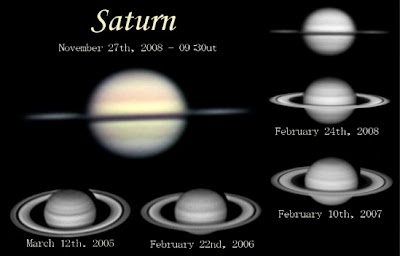 A Christmas treat via compliments of Saturn. So get up before sunrise and with the aid of a telescope [which might be under the tree] view a Saturn with nearly no rings. And, at that early hour, you might meet "the man".

You look through the telescope. Blink. Shake your head and look again. The planet you expected to see in the eyepiece is not the one that's actually there. Too much eggnog? No, it's just Saturn's crazy Christmas tilt.

All year long, the rings of Saturn have been tilting toward Earth and now they are almost perfectly edge-on. The opening angle is a paper-thin 0.8o. Viewed from the side, the normally wide and bright rings have become a shadowy line bisecting Saturn's two hemispheres--a scene of rare beauty.

Amateur astronomer Efrain Morales Rivera of Aguadilla, Puerto Rico, has been monitoring Saturn and he created this composite image to show how the geometry has changed.

Astronomers call the phenomenon a "ring plane crossing." As Saturn goes around the sun, it periodically (once every 14 to 15 years) turns its rings edge-on to Earth. Because the rings are so thin, they can actually disappear when viewed through a backyard telescope. At the precise moment of crossing, Saturn undergoes a startling metamorphosis. The ringed planet becomes a lonely ball of gas, almost unrecognizable....

(Historical note: Shortly after Galileo discovered Saturn's rings in 1610, they disappeared in precisely this fashion. Galileo didn't understand the nature of the rings and the vanishing act confused him mightily. Nevertheless, his physical intuition prevailed. "They'll be back," he predicted, and without ever knowing why, he was correct.)

We're not quite there yet. The opening angle won't be precisely 0o until Sept. 4, 2009. Don't bother marking your calendar, though. Saturn will be so close to the sun, no one will be able to see the rings wink out.

The best time to look is now.

The 0.8o opening angle of Christmas 2008 is the minimum for some time to come. In January 2009 the rings begin to open up again, a temporary reversal caused by the orbital motions of Earth and Saturn. By the time narrowing resumes in summer 2009, Saturn will be approaching the sun; looking through a telescope then could actually be dangerous. The next ring plane crossing that's easy to watch won't come until 2038.

So wake up before sunrise on Dec. 25th, point your telescope at the golden "star" in Leo, and behold Saturn's crazy Christmas tilt....
Posted by Mercury at 2:48 PM