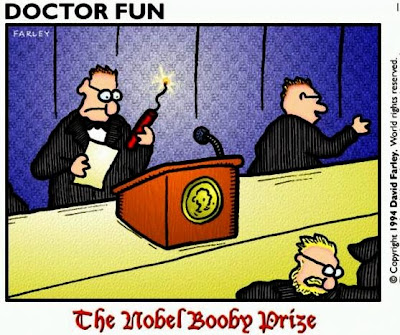 This doesn't really come as a surprise. When money and prestige are involved in human activities these two features rise to the top.

NDTV
The prestigious Nobel Prize has been hit by a bribery scandal. Several Nobel Prize jurors are now under the scanner for making all expenses paid trips to China in 2006 and 2008.

The jurors being investigated were members of Nobel committees for Medicine, Physics and Chemistry.

The probe is looking to whether the Nobel jurors' trips to China were meant to influence decisions of Nobel committees. The inquiry is also looking into why the Chinese invited the jurors.

The last time China claimed a science price was in 1957, when two Chinese researchers won the physics award.

The preliminary inquiry is being conducted by a special anti-corruption prosecutor at Stockholm in Sweden.
Posted by Mercury at 9:01 AM