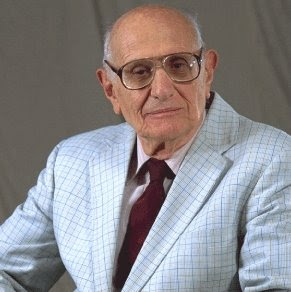 physicstoday.org
Robert Simha, a groundbreaking polymer physicist and emeritus professor of macromolecular science and engineering at Case Western Reserve University, passed away peacefully on 5 June 2008 at his residence in Cleveland Heights, Ohio.

Born in Vienna on 4 August 1912, Robert began his studies at the Polytechnic School in 1930 and transferred to the University of Vienna in 1931. Under thesis advisers Hans Thirring and Felix Ehrenhaft, he graduated with a PhD degree in theoretical physics in 1935. Robert chose his thesis topic, colloid hydrodynamics, in part from his discussions with Eugene Guth, a theoretical physicist. Guth was working with a dynamic interdisciplinary group directed by Herman Mark, which was studying the properties of polymers. Robert had the challenge of extending Albert Einstein's viscosity theory of rigid spheres to higher concentrations and to ellipsoidal and flexible solutes. Thus began an influential line of inquiry in which he published extensively until 1981. In that field he collaborated with Samuel Weissberg, Jacques Zakin, and one of us (Utracki).

In 1938 Robert obtained a postdoctoral position with and fellowship through Victor Kuhn LaMer at Columbia University. There he initiated groundbreaking research with Elliott Montroll on a kinetic theory of chain degradation processes. In 1942 Robert took a faculty position at Howard University and began a third seminal research direction, with Herman Branson, on the kinetics and statistics of copolymerization chain reactions. Next he moved to the National Bureau of Standards in 1945, where he and Leo Wall developed a theory of depolymerization, which was experimentally confirmed by Samuel Madorsky. The theory accounted for behaviors varying from random scission to unzipping with high monomer recovery. In 1951 Robert went to New York University’s department of chemical engineering, where he indulged a long-standing interest in statistical thermodynamics. With student Stuart Hadden, he used the cell theory of Ilya Prigogine to derive the equations of state of linear and branched paraffins. The paraffin work became the starting point for major explorations into the configurational thermodynamics of macromolecules and small molecules. Also, with Harry Frisch and Fritz Eirich, Robert developed a theory of adsorption of long chains from solution.

Robert went on to the University of Southern California in 1958. There he and Ray Boyer worked on the equilibrium and nonequilibrium properties of polymer glasses and melts; that work resulted in widely used correlations between the glass transition temperature and thermal expansivity. Robert's most notable achievement, however, was with Thomas Somcynsky: They derived the cell–hole theory of chain molecule liquids, which correctly characterizes the temperature and pressure effects on specific volume (the PVT behavior) and on the lattice vacancy fraction—that is, the free-volume content.

In 1968 Robert took a position at Case. With Alexander Silberberg and student Robert Lacombe, he studied the kinetics of cooperative processes in synthetic and biological macromolecular structures. Anh Quach was the first to show quantitative agreement with the cell–hole theory when he built a pressure dilatometer and carefully measured PVT behavior in two polymers—melt and glass. In his ongoing research on the theory, Robert worked with many international scientists. For example, he collaborated with Raj Jain (India) in successfully applying the theory to multicomponent systems. With Hankun Xie (China) and Chul Park (Canada), he extended it to gas solubility. Scientists worldwide were able to extend the cell–hole theory to more than 50 polymers.

Using the computed hole fraction, Robert developed an approach to determining nonequilibrium properties. In collaboration with John McKinney, he demonstrated the partial freeze-in of free volume at the glass transition temperature. With Utracki, he investigated the correlation between the hole fraction and viscous flow, and with John Curro and Richard Robertson, Robert explored the kinetics of volume relaxation. He did research with Gianni Consolati, Franz Maurer, John McGervey, and one of us (Jamieson) on the relationships between hole fraction and positronium annihilation lifetime spectroscopy. Working with Elisabeth Papazoglou, he developed a theory of elastic constants of polymer glasses that incorporated the stress dependence of free volume.

Robert's achievements were recognized in 1973 by the Society of Rheology, which awarded him the Bingham Medal. The American Physical Society presented him with the Polymer Physics Prize in 1981.

Throughout his professorial career, until he retired in 1983, Robert was a gifted and highly popular teacher. Scientific discussions with him were enlivened by his droll sense of humor and encyclopedic knowledge of classical music, which was forever playing on an antique radio in his office. We will miss his sharp wit and poignant insights.