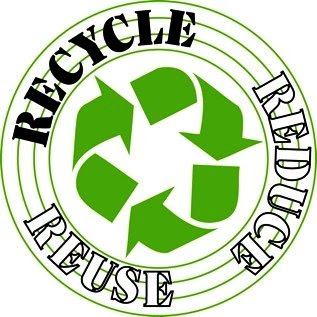 A great idea not always perfect for every community now disintegrating--figuratively. Think of the consequences: A reverting to old ways of disposing trash and environmental concerns.

"Back at Junk Value, Recyclables Are Piling Up"

The economic downturn has decimated the market for recycled materials like cardboard, plastic, newspaper and metals. Across the country, this junk is accumulating by the ton in the yards and warehouses of recycling contractors, which are unable to find buyers or are unwilling to sell at rock-bottom prices.

Ordinarily the material would be turned into products like car parts, book covers and boxes for electronics. But with the slump in the scrap market, a trickle is starting to head for landfills instead of a second life.

"It's awful," said Briana Sternberg, education and outreach coordinator for Sedona Recycles, a nonprofit group in Arizona that recently stopped taking certain types of cardboard, like old cereal, rice and pasta boxes. There is no market for these, and the organization’s quarter-acre yard is already packed fence to fence.

"Either it goes to landfill or it begins to cost us money," Ms. Sternberg said.

In West Virginia, an official of Kanawha County, which includes Charleston, the state capital, has called on residents to stockpile their own plastic and metals, which the county mostly stopped taking on Friday. In eastern Pennsylvania, the small town of Frackville recently suspended its recycling program when it became cheaper to dump than to recycle. In Montana, a recycler near Yellowstone National Park no longer takes anything but cardboard.

There are no signs yet of a nationwide abandonment of recycling programs. But industry executives say that after years of growth, the whole system is facing an abrupt slowdown.

Many large recyclers now say they are accumulating tons of material, either because they have contracts with big cities to continue to take the scrap or because they are banking on a price rebound in the next six months to a year.

On the West Coast, for example, mixed paper is selling for $20 to $25 a ton, down from $105 in October, according to Official Board Markets, a newsletter that tracks paper prices. And recyclers say tin is worth about $5 a ton, down from $327 earlier this year. There is greater domestic demand for glass, so its price has not fallen as much.

This is a cyclical industry that has seen price swings before. The scrap market in general is closely tied to economic conditions because demand for some recyclables tracks closely with markets for new products. Cardboard, for instance, turns into the boxes that package electronics, rubber goes to shoe soles, and metal is made into auto parts.

One reason prices slid so rapidly this time is that demand from China, the biggest export market for recyclables from the United States, quickly dried up as the global economy slowed. China’s influence is so great that in recent years recyclables have been worth much less in areas of the United States that lack easy access to ports that can ship there.

The downturn offers some insight into the forces behind the recycling boom of recent years. Environmentally conscious consumers have been able to pat themselves on the back and feel good about sorting their recycling and putting it on the curb. But most recycling programs have been driven as much by raw economics as by activism.

Cities and their contractors made recycling easy in part because there was money to be made. Businesses, too — like grocery chains and other retailers — have profited by recycling thousands of tons of materials like cardboard each month.

But the drop in prices has made the profits shrink, or even disappear, undermining one rationale for recycling programs and their costly infrastructure.

"Before, you could be green by being greedy," said Jim Wilcox, a professor at the Haas School of Business at the University of California, Berkeley. "Now you've really got to rely more on your notions of civic participation."

The impact of the downturn on individual recycling efforts varies. Most cities are keeping their recycling programs, in some cases because they are required by law, but also because the economics, while they have soured, still favor recycling over landfills.

In New York City, for instance, the city is getting paid $10 for a ton of paper, down from $50 or more before October, but it has no plans to cease recycling, said Robert Lange, the city's recycling director. In Boston, one of the hardest-hit markets, prices are down to $5 a ton, and the city expects it will soon have to pay to unload its paper. But city officials said that would still be better than paying $80 a ton to put it in a landfill.

Some small towns are refusing to recycle some material, particularly the less lucrative plastics and metals, and experts say more are likely to do so if the price slump persists.

Businesses and institutions face their own challenges and decisions. Harvard, for instance, sends mixed recyclables — including soda bottles and student newspapers — to a nearby recycling center that used to pay $10 a ton. In November, Harvard received two letters from the recycler, the first saying it would begin charging $10 a ton and the second saying the price had risen to $20.

"I haven't checked my mail today, but I hope there isn’t another one in there," said Rob Gogan, the recycling and waste manager for the university’s facilities division. He said he did not mind paying as long as the price was less than $87 a ton, the cost for trash disposal.

The collapse of the market is slowing the momentum of recycling overall, said Mark Arzoumanian, editor in chief of Official Board Markets. He said the problem would hurt individual recycling businesses, but also major retailers, like Wal-Mart Stores, that profit by selling refuse.

Mr. Arzoumanian said paper mills in China and the United States that had signed contracts requiring them to buy recycled paper were seeking wiggle room, invoking clauses that cover extraordinary circumstances. "They are declaring 'force majeure,' which is a phrase I'd never thought I’d hear in paper recycling," he said.

Mr. Arzoumanian and others said mills were also starting to become pickier about what they take in, rejecting cardboard and other products that they say are "contaminated" by plastic ties or other material.

The situation has also been rough on junk poachers — people who made a profitable trade of picking off cardboard and other refuse from bins before the recycling trucks could get to it. Those poachers have shut their operations, said Michael Sangiacomo, chief executive of Norcal Waste Systems, a recycling and garbage company that serves Northern California.

"I knew it was really bad a few weeks ago when our guys showed up and the corrugated cardboard was still there," he said. "People started calling, saying 'You didn't pick up our cardboard,' and I said, 'We haven't picked up your cardboard for years.'"

The recycling slump has even provoked a protest of sorts. At Ruthlawn Elementary School in South Charleston, W.V., second-graders who began recycling at the school in September were told that the program might be discontinued. They chose to forgo recess and instead use the time to write letters to the governor and mayor, imploring them to keep recycling, Rachel Fisk, their teacher, said.

The students' pleas seem to have been heard; the city plans to start trucking the recyclables to Kentucky.

"They were telling them, 'We really don't care what you say about the economy. If you don't recycle, our planet will be dirty,'" Ms. Fisk said.
Posted by Mercury at 3:49 PM

Email ThisBlogThis!Share to TwitterShare to FacebookShare to Pinterest
Labels: recycling