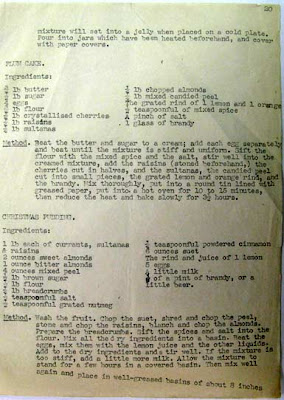 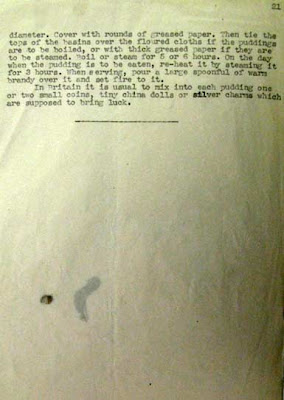 The writer was just as fastidious about food as words. Here we reproduce his original typewritten instructions for a Christmas pud

TIMESONLINE
Gordon Ramsay and George Orwell will meet at our Christmas lunch. Not in person (I don't think they'd have got on), but through their recipes. Ramsay will be tested by his five spice and lemon-roasted goose, as expounded in these pages last week. Orwell's job is the Christmas pudding.

I found the great writer's take on plum pudding through deep research (this is what we hacks call Googling idly around when we should be working). It lay, unpublished, in the archive of the Orwell Prize, which keeps many of his diaries and papers.

The recipe was written in 1945 but it doesn't show much concern for the severe food rationing British cooks had to deal with at the end of the Second World War. Orwell had been asked by the British Council to write on British cookery, for the edification of foreigners. Orwell went at it with gusto: "Cheap restaurants in Britain are almost invariably bad, while in expensive restaurants the cookery is almost always French, or imitation French."

The normal British diet, he goes on, is "simple, rather heavy, perhaps slightly barbarous... it is the diet of a wet, northern country where butter is plentiful and vegetable oils are scarce... Garlic is virtually unknown in British cookery proper: whereas mint, which is completely neglected in some European countries, figures largely".

Unsurprisingly, the British Council wriggled out of publishing the essay - though it paid him the full 30 guineas fee. The best thing about it, after the dry-as-toast wit, is the recipes: Orwell was a foodie. There are full instructions for treacle tart, Yorkshire pudding, plum cake and the Christmas pudding. There's also one for marmalade. Someone, from the British Council presumably, has scrawled "Bad recipe!" across that.

So how was the Christmas pudding, you're wondering. Well, it's sitting very happily in the fridge, gestating: three bowls containing all three kilos of it. The recipe is fairly standard for the time. It doesn't contain any ingredient that's not mentioned by the great Constance Spry. It is chiefly sultanas, raisins, currants, candied peel, almonds, flour, cinnamon and breadcrumbs.

The only problem I had with it was finding beef suet (Morrisons sorted that out). The only change I made was putting rather more brandy in than the mean eighth of a pint (75ml) that Orwell suggests. And, of course, I inserted pound coins rather than his threepenny-bits.

Orwell was better known as a washer-up than a cook, but he did have a thing about Christmas. Festive scenes and indeed puddings occur in several of the novels, though not his most famous, Nineteen Eighty-Four. In his essay "Can socialists be happy?", he mentions the legend that Lenin's death-bed reading was Dickens' Scrooge story, A Christmas Carol ("according to his wife, Lenin found its 'bourgeois sentimentality' completely intolerable").

We'll ponder that as we sit down to enjoy Orwell's Christmas pudding - with a little extra brandy butter. And we'll recall his glorious condemnation of the catering of 60 years ago: "It is not a law of nature that every restaurant in England should be either foreign or bad, and the first step towards an improvement will be a less long-suffering attitude in the British public itself." We've come quite a way. I wonder what he'd make of Kitchen Nightmares.


Which Christmas tree is "greener"--ask Lassie

Things of Christmas
Posted by Mercury at 5:26 AM