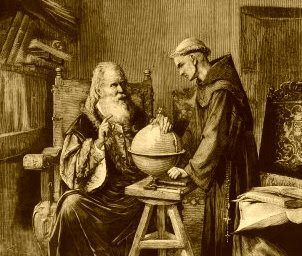 Galileo Galilei Demonstrates His Astronomical Theories to a Monk
This is somewhat unusual...that earlier observations of double stars negated the conclusions written in Galileo Galilei's Dialogue Concerning the Two Chief World Systems [1632]...such is the hypothesis in Christopher M. Graney's "Regarding the Potential Impact of Double Star Observations on Conceptions of the Universe of Stars in the Early 17th Century".

Galileo Galilei believed that stars were distant suns whose sizes measured via his telescope were a direct indication of distance -- fainter stars (appearing smaller in the telescope) being farther away than brighter ones. Galileo argued in his Dialogue that telescopic observation of a chance alignment of a faint (distant) and bright (closer) star would reveal annual parallax, if such double stars were found. This would provide support both for Galileo's ideas concerning the nature of stars and for the motion of the Earth. However, Galileo actually made observations of such double stars, well before publication of the Dialogue. We show that the results of these observations, and the likely results of observations of any double star that was a viable subject for Galileo's telescope, would undermine Galileo's ideas, not support them. We argue that such observations would lead either to the more correct idea that stars were sun-like bodies of varying sizes which could be physically grouped, or to the less correct idea that stars are not sun-like bodies, and even to the idea that the Earth did not move.

I've not heard anything about Galileo and stars. This looks simple enough, so if this is right how come we haven't heard about it before?