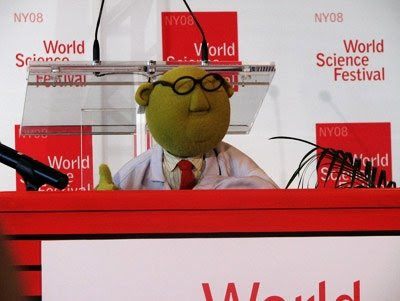 Dr. Bunsen Honeydew
No, it wasn't an annual Renaissance Festival...no turkey legs, flamboyant costumes, or funky games [like hit the bull's eye and dunk the knight] but New York city last week was the venue for science brought together by Brian Greene and friends.

"An Overflowing Five-Day Banquet of Science and Its Meanings"

It was on Friday evening, about 7 o'clock, that I began to wonder whether I would wind up hating Brian Greene and Tracy Day.

I was in a theater at the Metropolitan Museum of Art listening to Dr. Oliver Sacks, the neurologist, author and intellectual omnivore, describe contracting cancer in an eyeball. Dr. Sacks being Dr. Sacks, he was turning the decline of his vision into insights about his brain, showing sketches of the new world he sees — the Empire State Building, for example, no longer tapering but splaying outward like a mushroom.

But just as Dr. Sacks was getting rolling, I had to go, stepping on toes, banging knees and rushing up the street to the Solomon R. Guggenheim Museum if I wanted to find out the answer to the burning question of what happens when you teach a dancer string theory.

Now, I could have stayed with Dr. Sacks and gone to the Guggenheim the next night, when the Armitage Gone! dance company would repeat its performance. But then I wouldn’t be able to see the debate that night by a stageful of biologists, philosophers, physicists, neuroscientists and computer scientists about what it means to be human.

Of course, seeing that show meant that I could not go to an alternative-energy forum full of visionary schemes for powering the planet.

That was the World Science Festival in New York City this past weekend: 46 shows, debates, demonstrations and parties spread over five days and 22 sites between Harlem and Greenwich Village, organized by Dr. Greene, the Columbia physicist and author, and his wife, Ms. Day, a former ABC-TV producer. Jugglers and philosophers, magicians and biologists, musicians and dancers — a feast one couldn't hope to sample fairly.

Of course, I cannot fault Dr. Greene and Ms. Day for doing such a good job that I wanted to see much more than space and time permitted. In fact, you cannot help loving them. They are the first couple of New York science. And by their boldness and energy, they seem to have created a new cultural institution.

On Friday night, the line stretched out of the Skirball Center at New York University all the way down the block and around the corner, not for Sex and the City but for a scientific discussion of quantum weirdness. Most people had to be turned away. Counting a crowd estimated at 100,000 for the science street fair on Saturday, an eighth of a million people attended the festival. Every event sold out — confirmation, as Dr. Greene said, of "he public's desire to connect with science."

It hardly came off without a hitch. Tales were rampant in the weeks leading up to the festival of disorganization, programs planned, canceled and resurrected. The ticket lines were confusing. But the organizers got a lot of things right. The panel discussions, many of them guided by pros like Charlie Rose and Alan Alda, were for the most part actual discussions, or, better, arguments, and not a series of lectures.

There were flashy graphics everywhere.

I knew it was all working when my 6-year-old daughter, Mira, grabbed my notebook at a magic and “brain tricks” show and started taking notes.

What follows is a hop, skip and jump through that notebook, vivid impressions that leap out of a blur of 13 very different events. Detailed reports have been posted by colleagues on the blogs TierneyLab, Dot Earth and ArtsBeat.

I didn't know quite what to expect at the Moth, an organization devoted to live storytelling, where scientists and others bravely volunteered to tell tales of experiments gone wrong. But there was James Gates, an imposing string theorist from the University of Maryland with a silvered Afro who folded his entire life as a black man and a physicist into a 10-minute tale of almost falling to his death on a mountain in Iceland. Falling off a mountain, he recalled thinking with some dismay, would be a stereotypical death for a physicist, just as being shot by the police would be for a young black, something that almost happened to him on a stroll one night through Pasadena, Calif.

"Make your own trail," came the voice over the Icelandic mountainside when he called for help. Dr. Gates said he still doesn’t know whose voice it was.

As it happens, Dr. Gates was at the Guggenheim the next night in a more familiar role, offering physics commentary as Karole Armitage’s beautiful black-clad dancers bounced and spun off one another or melted like shadows or reflections in and out of the wings of the stage. Ms. Armitage said her dance, based on Dr. Greene’s book Elegant Universe, was trying to show how string theory could reconcile the quantum randomness of particles in the world with the warped space-time of Einsteinian gravity.

Which helped, a little.

At the Abyssinian Baptist Church in Harlem, organ music and the voices of the crimson-robed choir bounced off the stained-glass windows as physicists and science fans stood and swayed and clapped. Getting into the spirit, Dr. Greene took the pulpit for his introduction. "I may be a Jewish scientist," he said, "but I would be tickled silly if one day I were reincarnated as a Baptist preacher."

Another impression was the realization that scientists are just as confused as the rest of us with the Big Questions, like free will, God or whether we will ever solve our way out of this mess.

This came out clearly at the big Saturday night conference on what it means to be human. Dr. Greene said this was the panel that everyone wanted to be on, and it showed. It had 11 panelists, as well as the moderator, Mr. Rose.

They began by locating our humanity outside of our biological selves, in language, culture and science. But the conversation devolved back inward to ourselves as biological machines. After dismissing the threat or promise of genetically tinkering with our progeny — we do not know enough yet to know what is an improvement and what is not — the panelists turned combative about free will and morality.

If we are the product of our genes and our environment, asked Paul Nurse, a Nobel Prize-winning biologist who is president of the Rockefeller University, what becomes of free will and the sense of personal responsibility on which society and the criminal justice system are based?

Daniel Dennett, a philosopher at Tufts, argued that humans are free, which he defined as the capacity to be moved by reasons. But weren’t those reasons just part of the environment? Dr. Dennett responded that we have to build the environment so that people will do the right thing.

Morality is the elephant in the room, said Francis Collins, head of the Human Genome Project at the National Institutes of Health, suggesting that humans seem to have an inbred sense of right and wrong from God.

The day before, he had won huge applause for maintaining that he did not have to choose between Darwin and God. A scientist could be religious. But this time he was hammered for failing to consider that evolution could instill such values if they proved adaptive.

"Why do you prefer God to me?" asked Marvin Minsky, a computer science professor at M.I.T. and a founder of the field of artificial intelligence.

"Do you really want to know?" Dr. Collins responded.

Before long, Mr. Rose waved his arms, saying time was up. But the panelists were having too much fun. Dr. Minsky folded his arms defiantly and said, "We should just stay here and see what they do."

The whole audience would have stayed with him. I look forward to the arguments continuing next year.
Posted by Mercury at 7:48 AM