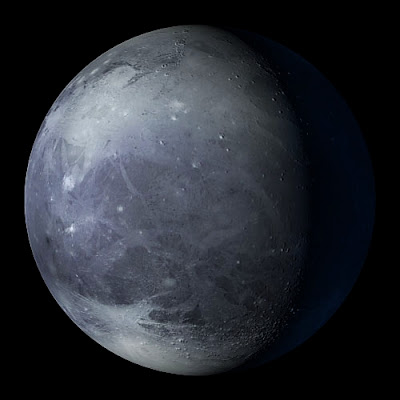 Pluto
Does this satisfy everyone now?

The International Astronomical Union (IAU) has decided that Pluto — and other dwarf planets in the Solar System that share similar characteristics — should now be sub-classified as "plutoids".

The revised classification comes almost two years after Pluto was demoted from "planet" to "dwarf planet" in order to dispel inconsistencies in Solar System nomenclature that have arisen as more orbiting bodies have been discovered.

A dwarf planet is a body orbiting the Sun that has enough gravity to assume a near-spherical shape, but that is not the sole occupant of its orbit. To be a "plutoid", according to the IAU, the dwarf planet must also be orbiting at a greater distance than Neptune. Aside from Pluto, the only other known dwarf planet fitting this specification is Eris, although more are expected to be found in the future.

The IAU, which has been responsible for the classifying planetary bodies and satellites since the early 1900s, had always planned to create sub-classes within the class of "dwarf planet". The name "plutoid" was proposed by the IAU Committee on Small Body Nomenclature, and then accepted by the IAU Working Group for Planetary System Nomenclature and the board of IAU’s Division III, which concerns planetary systems. It was finally approved by IAU executives at a recent meeting in Oslo, Norway.

When Pluto was first reclassified, some astronomers criticized the definition for not being robust enough, in particular because the orbits of certain planets — including Earth — also overlapped with other bodies. On top of that, they complained that there were not enough astronomers consulted when decision was made.

Catherine Cesarsky, president of the IAU, dismisses such past protests. "They form a very small part of the astronomy community," she told physicsworld.com. She added that "practically nobody" is now trying to get Pluto reclassified as a planet.

However, Alan Stern, principal investigator for NASA’s New Horizons mission to Pluto, has already mocked the new plutoid definition. "Plutoids or haemorrhoids, whatever they call it. This is irrelevant," he has been reported as saying.

Cesarsky admits that she has not yet heard the response from the astronomy committee for the rebranding. "I don’t think there will be a big [reaction]," she says. "A few people make a lot of noise."