"Fear and trembling"...of the unknown 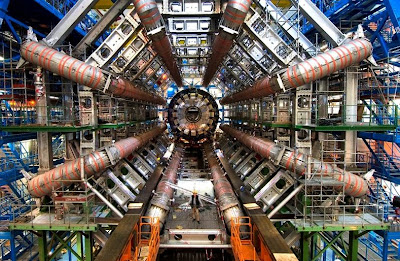 "Fear and trembling"...shades of Y2K?

physicsworld.com
A report from the CERN laboratory near Geneva has restated the conclusion that the Large Hadron Collider (LHC) — the biggest experiment in particle physics — poses “no danger” to humankind. CERN hopes the report will dispel public fears that the accelerator will produce black holes or hypothetical particles known as strangelets that could destroy the Earth.

If all goes to plan, CERN expect to inject the first proton beams into the LHC in August. These beams will collide at energies close to 14 TeV — enough to generate a hoard of new particles and possibly even the highly anticipated Higgs boson. However, amid all the excitement about the discovery of new physics, some of the public have worried that particle collisions at the LHC might create other, more sinister entities. Recently Walter Wagner, a trained nuclear physicist, and colleague Luis Sancho filed a lawsuit in Hawaii to prevent the LHC from starting up based on these worries.

In 2003 CERN’s LHC safety study group produced a report that concluded that there is "no basis for any conceivable threat" of either dangerous black holes or strangelets. The new report — written by the LHC safety assessment group (LSAG) including John Ellis, Gian Giudice, Michelangelo Mangano, Igor Tkachev and Urs Wiedemann of CERN — has come to exactly the same, though "reinforced", conclusion.

"With this report, the laboratory has fulfilled every safety and environmental evaluation necessary to ensure safe operation of this exciting new research facility," said Robert Aymar, director-general of CERN, in a statement.
No danger

The LSAG report draws attention to the fact that cosmic rays collide continually with the Earth and other astronomical bodies at much higher energies than the LHC, yet do not appear to create either large black holes or strangelets. "We estimate that the universe is replicating the total number of collisions to be made by the LHC over 1013 times per second, and has already done so some 1031 times since the origin of the universe," the report states.

With regards to black holes, the report maintains that "if they can be produced in the collisions of elementary particles, they must also be able to decay back into them." If the black holes do not immediately decay, however, "they would be unable to accrete matter in a manner dangerous for the Earth."

A simple summary of the LSAG report can be read here.