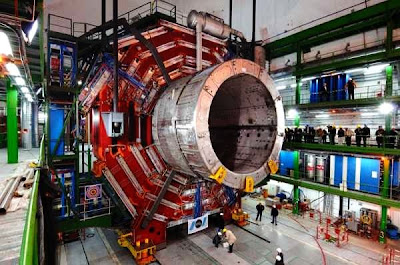 Now it will be officially put to rest though I doubt the naysayers will be placated.

The New York Times
Calling its claims "overly speculative and not credible," and saying that it is too late anyway, lawyers for the federal government argued this week that a so-called "doomsday suit" intended to prevent the startup of a the world’s most powerful particle accelerator should be thrown out of court.

When it begins operations, the collider will smash together subatomic particles at the speed of light in search of new forms of matter and new laws of physics.

In the lawsuit, filed in March in Honolulu district court, Walter Wagner, a retired radiation safety expert who lives in Hawaii, and Luis Sancho, a Spanish science writer, contended that the Large Hadron Collider could create microscopic black holes that could wind up eating the Earth, or other dangerous particles known as strangelets — a sort of contagious dead matter — or so-called magnetic monopoles, which could catalyze the destruction of ordinary matter.

The two men sued the European Center for Nuclear Research, or Cern, which is building the collider outside Geneva, Switzerland, and its American collaborators, the Department of Energy, the National Science Foundation and the Fermi National Accelerator Laboratory to stop the collider from going into operation until it had been proven safe.

In a barrage of some 40 documents filed the this week, government lawyers argued that the case should be dismissed and that they were entitled to a summary judgement in their favor because the lawsuit is subject to a six-year statute of limitations. The clock started ticking in this regard in 1998 or 1999 when the National Science Foundation and the Department of Energy began spending money on the collider, the government lawyers say.

The government's counterattack comes on the heels of a long-awaited safety report issued by Cern physicists last week and approved by an outside panel that concluded there was no danger to the Earth from black holes or anything else that might come out of the collider. Everything that could happen in the collider has already happened millions of times over due to cosmic rays, the physicists said.

"There is no basis for any concerns about the consequences of new particles or forms of matter that could possibly be produced by the LHC," the report said.

Citing this and a previous safety report in 2002, the government argued that the plaintiffs, Mr. Wagner and Mr. Sancho, had no standing because they could not demonstrate any credible injury. "Scientifically," the brief says, "there is no basis for any conceivable threat that Plaintiffs have theoretically envisaged, such as strangelets, black holes, and magnetic monopoles."

This is not the first time, as the government noted, that Mr. Wagner has forecast the apocalypse. In 1999 and 2000, he sued to stop the Relativistic Heavy Ion Collider, or Rhic, at the Brookhaven National Laboratory on Long Island using the same arguments, which were found to be "speculative." Those cases were dismissed.

"This court should similarly reject Plaintiffs' challenges for the pure speculation they are and dismiss Plaintiffs' claims against Federal Defendants," the government said this week.

The lawyers also argued that even if Mr. Wagner and Mr. Sancho won, it would do them no good because the American share of the collider’s $8 billion cost — some $531 million — has now all been spent. Indeed, on Wednesday, June 25, Raymond Orbach, under secretary for science at the Department of Energy, issued a formal proclamation that the U.S. construction effort had been completed.

Although the U.S. continues to spend some money to support the experiments that will sift and analyze the products of these subatomic collisions, the machine will start up this fall with or without American participation.

In a deposition filed along with the government brief, Bruce P. Strauss, associate program manager for the collider at the Dept. of Energy, said, "If U.S. scientists were pulled back from the LHC today, this would have no impact on CERN’s start of LHC operations."

He added that important discoveries could be made almost immediately once the collider started up. "If U.S. physicists were enjoined from participating in experiments during that period, the U.S. would miss the early scientific benefits of its $531 million investment in the LHC." Of course, Cern, being a European organization based in Geneva, is outside the jurisdiction of a court in Hawaii.

Meanwhile, the government also argues, Fermilab should be let off the hook. It cannot be sued, they said, because it is not a legal entity, not an agency of a corporation. It is "simply a collection of physical asssets (such as scientific equipment and buildings)" owned by the Department of Energy, which approves and pays for all the operations there, according to an affidavit from Joanna M. Livengood, the department’s site manager there.

According to Andrew Ames, a spokesperson for the Department of Justice, the court set the date of Sept. 2 for on the government’s motions, which means both sides will be producing more briefs and depositions in the next two months.

Mr. Wagner said by e-mail that he plans to fight on. "I believe the Complaint does state a valid case," he said, referring to his lawsuit.

Among other things, he said, he and Mr. Sancho will be filing affidavits saying that the safety report is flawed and incomplete, that Fermilab really is a legal entity, and that the U.S. agencies still have "obligations to Cern."


"Fear and trembling"...of the unknown

I have not and will not post a counter statement from one individual for the links will not function, but in all fairness there are those that are most perturbed about the LHC and it appears that the spokesperson for the movement is JTankers whose website is here .

The LHC is an opportunity to make a change. By thinking, and speaking publicly, about fundamental concepts that underlie physical theory, the physicist may both accrue public interest in his work and contribute to the analysis of the foundations of modern physics. We start by several remarks on the scientific and societal context of today’s theoretical physics. Major classes of models for physics to be explored at the LHC are then reviewed. This leads us to propose an LHC timeline and a list of potential effects on theoretical physics and the society.

We then explore three conceptual questions connected with the LHC physics. These are placed in the context of debates both in high-energy physics and in the philosophy of physics. Symmetry is the first issue: we critically review the argument for its a priori and instrumental functions in physical theory and study its connection with naturalness. If perceived as a dynamical process in analogy with non-unitary measurement in quantum mechanics, spontaneous symmetry breaking is found to emphasize the role of randomness against physical law. Contrary to this cosmological
view, the strictly non-dynamical role of spontaneous symmetry breaking within quantum field theory provides one of the strongest arguments in favour of the instrumental approach to symmetry. Second, we study the concept of effective field theory and its philosophical significance. Analogy with S-matrix suggests that one should treat effective theory both as a pragmatic and a provisional tool. Finally, we question the meaning of fine tuning. Legitimate fine-tuning arguments are interpreted nonontologically.

These are contrasted with unsound use of fine tuning, e.g., for comparing different models. Counterfactual reasoning referring to the anthropic principle is shown to be problematic both conceptually and in the light of quantum theory.
On the eve of the LHC: conceptual questions in high-energy physics