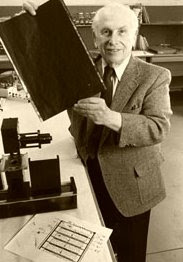 The New York Times
Alvin M. Marks, a prolific inventor who held patents on polarized film for sunglasses, a 3-D moviemaking process, a generator the size of a grapefruit that could produce enough electricity for a house, a windmill with no moving parts and a trillion-dollar "space train," died Sunday in Gardner, Mass. He was 97 and lived in Athol, Mass.

The cause was liver and pancreatic cancer, said Molly Bennett Aitken, his former wife.

A man capable of both small-bore pragmatism and large-scale imagination, Mr. Marks held 122 patents. An expert in optics, he developed several variants of polarized film that were used in sunglasses and to reduce glare on television screens; a headlight system to aid night driving; and window panels that change gradually from transparent to opaque and back again.

In 1951, he was granted a patent for a "three-dimensional intercommunicating system" that could be used to make TV shows and movies. He was president for many years of the Marks Polarized Corporation, based in the Whitestone section of Queens, where, along with his brother, Mortimer, who died in 2006, he invented many improvements on his original device, even though three-dimensional moviemaking never became the widespread technique he hoped it would.

For much of the latter half of his career, Mr. Marks focused on developing alternative and low-cost energy sources. An early experimenter with solar energy, he served as an adviser to President John F. Kennedy, and in 1967 was a consultant to the United States Senate on new technologies.

His inventions in the energy field include several aerosol electric power generators for home use as well as larger-scale generators, including the "windmill" with no moving parts, which proposed the placement in remote locations of enormous screens that would emit charged water particles into the wind to create power.

In recent years, he had been developing an array of minute antennas capable of collecting sunlight and transforming it into electricity, as well as a corresponding battery for storing it.

Alvin Melville Marks was born in Brooklyn on Oct. 28, 1910. His father, Alexander, was a lawyer. He studied at a variety of colleges and universities, including Brooklyn Polytechnic Institute, Harvard, M.I.T. and New York University, receiving a bachelor of science degree in electrical engineering from Cooper Union. Because he could read German, his former wife said, he spent much of his Navy service during World War II translating intercepted Nazi documents.

After his first two marriages ended in divorce, he married Molly Bennett in 1967; they divorced a decade later, and she subsequently married Gerard Aitken III, who became Mr. Marks’s business partner, helping to raise money to support his research. Mr. Aitken died in 1987, and Mr. Marks adopted the two young children his partner and friend had had with his former wife.

"My father was fluid with unconventional relationships for years," said Ms. Marks Tabby. "That’s how he ended up having a hand in raising nine children."

In 1989, Mr. Marks won a patent, with Peter G. Diamandis, for perhaps his most audacious invention, a plan to circumvent conventional space travel with a 6.6-million-pound, 180-foot train that would be propelled into outer space in an electromagnetic tunnel. It would cost trillions of dollars and take a decade to build, he said, but once complete, it would cut the cost of space exploration drastically.

"It’s a feasible idea and should be given consideration," he told The New York Times at the time.
Posted by Mercury at 5:10 AM