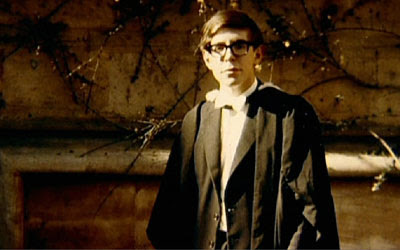 Stephen Hawking at 21
"...Hawking, who is now 66, hints at this: "I would have liked to have done more," he concedes, "in particular to have found a complete theory of quantum gravity and the early universe."
Wishful thinking and a fundamental philosophical flaw. Late February, the English were treated to a two part documentary on Stephen Hawking...Stephen Hawking: Master of the Universe. And I am sure negotiations are being made as I write for PBS to buy the rights to broadcast the program in the United States as a special or a NOVA presentation in the distant future.

Here is the IOP review:

"A brief history of Hawking"

Stephen Hawking: Master of the Universe

physicsworld.com
One could say that Stephen Hawking is the epitome of the general public's view of a scientist — someone who dedicates their life to science with a blind determination to unravel the mysteries of the cosmos. Struck down by motor neurone disease in his early twenties while doing his PhD, Hawking is now almost totally paralysed and can only communicate via his synthesized voice box. Yet it is this oracle-like voice and his dogged determination to understand our universe that have helped him become one of the most recognisable physicists alive today — even if he is not the latter-day Newton or Einstein the media likes to suggest.

Hawking now can only communicate via a single cheek muscle, which he can flex in response to characters on a screen allowing him to type out sentences. Even though it takes him a minute to type three words, Hawking unbelievably still undertakes a full week of teaching and research. Indeed, he still has four PhD students. The two-part television series Stephen Hawking: Master of the Universe, which is to be broadcast on 3 and 10 March on the UK's Channel 4, looks at the life and work of Hawking, from his two failed marriages to his work on black holes and the beginnings of the universe. The series, like Hawking himself, doesn't shy away from getting stuck into the biggest topics in physics from string theory to colliding branes.

The first episode looks at Hawking's early life, and his quest to unify quantum mechanics with general relativity through his work on black holes. It also delves into his first marriage to Jane Wilde — then a language student — and the eventual strains that occurred due to his work and the fame that was brought by his book A Brief History of Time, published in 1988.

The first instalment does a good job of explaining the concept of Hawking radiation, which is caused by the creation of negative and positive mass particles at the edge of black holes. "It is one of the greatest papers of the 20th century," is how Andy Strominger from Harvard University describes Hawking’s 1975 paper on particle creation by black holes.

The mind of God

Hawking appears throughout the two programmes, but I felt somewhat uneasy with the constant reference to God running throughout the first part, which starts with Hawking’s famous the suggestion that he "wanted to know the mind of God" and continues with him questioning whether we need a god at all. As if to emphasize the link to God, heavenly-sounding choirs pipe-up whenever we see old footage of Hawking wheeling himself around Cambridge or giving seminars.

Both episodes feature cameo appearances from various physicists describing physical concepts. Media darling Michio Kaku from the City College of New York is wheeled in to describe difficult topics such as supersymmetry, quantum mechanics and string theory, all with the help of props from a local fairground. String theorist Lisa Randall from Harvard University also appears, describing the concepts of extra dimensions using, bizarrely, calorie-filled doughnuts in a coffee shop.

The second part focuses more on current issues in physics and has less about Hawking's own work. You start to get a sense that a new generation of physicists have taken over his mantel in the quest to unify the four fundamental forces. Indeed, the programme almost turns into an episode of Michael Green: Master of String Theory when it describes how Green — another theorist at Cambridge who, together with John Swartz, came up with the idea of superstring theory and how it is possibly the best way of describing gravity with quantum mechanics. The viewer is left not knowing whether Green and Hawking are competitors or collaborators. Hawking, however, gives a rather subdued response to string theory: "If string theory is correct," he says, "help may be on hand from extra dimensions [to unify the four forces]."

If people haven't had enough of trying to understand and visualize 11 dimensions (helped in part by Kaku and a fishpond), the final 20 minutes of the second instalment then goes into the world of colliding branes and spontaneous creation of universes which Hawking pioneered in his "no boundary condition" proposal for the start of the universe.

With all the difficulties that Hawking has experienced, you may wonder what would have been possible if he was still fully able-bodied. But is that possibly the point — that his drive to understand the universe was brought on by his disability and his stubbornness to not let it get in the way? Yet even with his disability, he never gives the impression that he is frustrated with the cards life has dealt him.

Overall, the documentary explains Hawking's theories well enough for the layperson to grasp. But it also gives a sense that time has now run out for Hawking and his quest to formulate a theory of everything. Even Hawking, who is now 66, hints at this: "I would have liked to have done more," he concedes, "in particular to have found a complete theory of quantum gravity and the early universe." Ever the jester, he points out wryly: "But that wouldn’t have left much for anyone else to do."
Posted by Mercury at 5:33 AM

How many of us really come to the end feeling we have done all we can? When we consider how much a professional baseball pitcher is paid for 6 months work I say play it for all you can Mr. Hawkings. When one considers the amount of trash there is in network programming I say yeah PBS....and I hope Mr. Hawkings makes PBS pay through the nose for the rights to air the documentary.

Be careful what you wish for. Wishing for "...PBS pay through the nose for the rights to air the documentary." may not be a good idea. Consider the repercussions: More info and self help programing with the likes of Wayne Dyer and Suzi Orman, wrinkly Osmonds, geriatric doo woppers in walkers, Celtic women on steroids who have the Peter Pan syndrome ["I can fly, I can fly"], and endless begging. Hawking has to be paid somehow.