On the Revolutions of the Celestial Spheres
by
Nicolaus Copernicus
1543

Nicolaus Copernicus's book "De Revolutionibus Orbium Coelestium" ("On the Revolutions of the Celestial Spheres"). In it, the Polish astronomer laid out his theory that the Earth and other planets go around the Sun, contravening a millennium of church dogma that the Earth was the center of the universe.
The above and other science related items will be auctioned at Christie's auction house the week of June 16th. So, if you have a few bucks left over from purchasing gasoline and food you might wish to participate.

"Among Scientific Treasures, a Gem"

The New York Times
One thing you can say about the copy of Nicolaus Copernicus’s book De Revolutionibus Orbium Coelestium (On the Revolutions of the Celestial Spheres), on sale next week at Christie's auction house, is that it looks and feels old.

Its cover is dented and stained. The pages are warped. You could easily imagine that this book had sat out half a dozen revolutions hidden in various dank basements in Europe.

In fact this book, published in 1543, was the revolution. It was here that the Polish astronomer laid out his theory that the Earth and other planets go around the Sun, contravening a millennium of church dogma that the Earth was the center of the universe and launching a frenzy of free thought and scientific inquiry.

The party, known as the Enlightenment, is still going strong. It was a thrill to hold Copernicus in my hands on a recent visit to the back rooms of Christie's and flip through its hallowed pages as if it were my personal invitation to the Enlightenment. No serious library should be without one. Just in case you are missing your own copy, you can pick up this one for about the price of a Manhattan apartment next Tuesday, according to the Christie's catalog, which estimates its value at $900,000 to $1.2 million.

The Copernicus is a cornerstone in the collection of a retired physician and amateur astronomer, Richard Green of Long Island, that constitutes pretty much a history of science and Western thought. Among the others in Dr. Green's library are works by Galileo, who was tried for heresy in 1633 and sentenced to house arrest for his admiration of Copernicus and for portraying the pope as a fool, as well as by Darwin, Descartes, Newton, Freud, Kepler, Tycho Brahe, Malthus and even Karl Marx.

One lot includes Albert Einstein's collection of reprints of his scientific papers, including his first one on relativity. Another is a staggeringly beautiful star atlas, Harmonia Macrocosmica, by the 17th-century Dutch-German cartographer Andreas Cellarius, with double-truck hand-colored plates.

Pawing through these jaw droppers, I found my attention being drawn again and again to a small white book, barely more than a pamphlet, a time machine that took me back to a more recent revolution. It was the directory for world’s first commercial phone system, Volume 1, No. 1, published in New Haven by the Connecticut District Telephone Company in November 1878, future issues to be published "from time to time, as the nature of the service requires."

Two things struck me. As an aging veteran of the current rewiring of the human condition, I wondered whether there might be lessons from that first great rewiring of our collective nervous system.

Another was a shock of recognition — that people were already talking on the phone a year before Einstein was born. In fact, just two years later Einstein's father went into the nascent business himself. Einstein grew up among the rudiments of phones and other electrical devices like magnets and coils, from which he drew part of the inspiration for relativity. It would not be until 1897, after people had already made fortunes exploiting electricity, that the English scientist J. J. Thomson discovered what it actually was: the flow of tiny negatively charged corpuscles of matter called electrons.

The New Haven switchboard opened in January 1878, only two years after Alexander Graham Bell, in nearby Boston, spoke the immortal words "Mr. Watson, come here. I want you." It was the first commercial system that allowed many customers to connect with one another, for $22 a year, payable in advance.

The first directory consisted of a single sheet listing the names of 50 subscribers, according to lore. By November, the network had grown to 391 subscribers, identified by name and address — phone numbers did not yet exist. And the phone book, although skimpy, had already taken the form in which it would become the fat doorstop of today, with advertisements and listings of businesses in the back — 22 physicians and 22 carriage manufacturers, among others.

Customers were limited to three minutes a call and no more than two calls an hour without permission from the central office.

Besides rules, the embryonic phone book also featured pages of tips on placing calls — pick up the receiver and tell the operator whom you want — and how to talk on this gadget. Having a real conversation, for example, required rapidly transferring the telephone between mouth and ear.

"When you are not speaking, you should be listening," it says at one point.

You should begin by saying, "Hulloa," and when done talking, the book says, you should say, "That is all."

The other person should respond, "O.K."

Because anybody could be on the line at any time, customers should not pick up the telephone unless they want to make a call, and they should be careful about what others might hear.

"Any person using profane or otherwise improper language should be reported at this office immediately," the company said.

If only they could hear us now. On second thought, maybe it's better they can't. Today we are all on a party line, and your most virulent thoughts are just a forward button away from being broadcast to the universe. Would it have killed the founders of the Internet to give us a little warning here?

Near the back of the book is an essay on another promising new wonder that "has attracted renewed attention both in this country and in Europe."

Many of the streets and shops of Paris, it is reported, are now illuminated by electric lights, placed on posts. "People seated before the cafes read their papers by the aid of lights on the opposite side of the way, and yet the most delicate complexions and softest tints in fabrics do not suffer in the white glare of the lamps. Every stone in the road is plainly visible, and the horses move swiftly along as if confident of their footing," the book says.

It makes you wonder what could come next. Oh yes, those horses. No revolution is ever done.

On the Revolutions of the Celestial Spheres 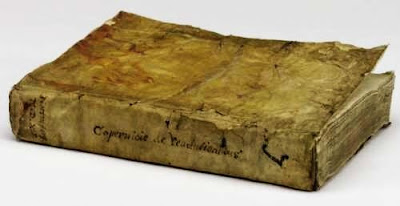 physicsworld.com
Most of you will never have raised an arm at Christie's auction house. But, if you're partial to the odd extravagance, there's a first edition of Nicolaus Copernicus's De Revolutionibus Orbium Coelestium ("On the Revolutions of Celestial Spheres") up for grabs. It'll probably cost you around a million dollars.

Bidding for the 1543 volume starts on 17 June, and I expect it will end up in the vault of some blasé collector. No-one will ever read it, but then it is in Latin, and who understands that these days? Nil desperandum, though, that's what I like to say.

Still, I know of least one physicist who would love to get his hands on it. Owen Gingerich, a historian of astronomy from Harvard University, has spent years tracing copies of Copernicus's masterpiece, partly as an exercise for a book he wrote in 2004. A first edition would be the darling possession on his mantelpiece. "There aren't that many copies in private hands these days," he lamented on the phone to me a few moments ago.

Nowadays Gingerich finds solace in a second-edition. Although considerably less valuable, it does have annotations by Rheticus, the young mathematician who persuaded Copernicus to publish his radical ideas. Gingerich did get the opportunity a few years ago to buy a bona-fide first edition for $50,000, which would have been a good investment but which unfortunately would have required him to re-mortgage his house.

Will Gingerich put in a bid at Christie's this time round? "I figure that even if I had it I'd have to rent a bank safety deposit box to keep it in," he says. "So I'll give it a pass."
Posted by Mercury at 4:27 AM