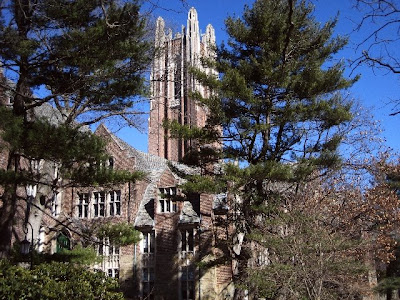 The private school paid an undisclosed price for a second edition of a book that made the then-heretical claim that the sun was at the center of the universe, rather than the Earth.

Provenance: Nicolas-Joseph Foucault (1643-1721), first marquis de Magny, archeologist, early bibliophile, lawyer, politician and administrator. He owned illuminated manuscripts, as well as important scientific books including Newton and a colored copy of Fuch's herbal, 1542 (bookplate); Myron Prinzmetal (1908-1987), cardiologist, purchased this copy in 1957 from F. Thomas Heller, New York, who had acquired it from Librarie Thomas-Scheler, Paris, listed by Scheler in his Catalogue nouvelle serie no. 1 (1957); sold by Zeitlin & VerBrugge to Richard Green in 1975.

A SUPERLATIVE COPY IN A CONTEMPORARY BINDING: WITH VERY STRONG IMPRESSIONS OF THE TEXT AND CUTS. UNWASHED AND UNPRESSED

FIRST EDITION OF THE MOST IMPORTANT SCIENTIFIC PUBLICATION OF THE 16TH CENTURY AND A "LANDMARK IN HUMAN THOUGHT" (PMM). De revolutionibus placed for the first time the sun at the center of the universe and described the earth's diurnal rotation and its annual rotation around the sun. Copernicus denounced the geocentric belief in the immobility of the earth as based on mere appearance. In order even to entertain an idea such as a heliocentric universe Copernicus had to break with virtually all current knowledge: astronomical, metaphysical, theological and, most basically, simple sensory perception. The geocentric system of Ptolemy had held sway for over a millennium; Aristotelianism dictated that there was a fundamental difference between heavenly and terrestial bodies; and theological dogma considered geocentrism as the very foundation of the special relationship between God and man. Aware of the radical nature of his theory, Copernicus composed an introduction in which he attempted to trace historical antecedents for his basic tenets. He cites antecedents for the mobility of the earth in Pythagoras and Heraclides and for the earth's revolution around the sun in Aristarchus. While these antecedents provided a handy defense for Copernicus, it is unlikely that they played any signifcant role in developing his theory (cf. O. Gingerich, Eye of Heaven, 1993). The Church in fact never officially condemned Copernicus's work as heretical, in part because its observations were essential to reform of the calendar and thus to the precise determination of Easter.

Copernicus first made known his ideas on heliocentrism in manuscript form only, which he circulated among a few colleagues. His radical work came to the attention of a young mathematician and astronomer, Georg Joachim Rheticus, who became the chief advocate of Copernicus's new theory. Rheticus persuaded Copernicus to allow him to announce in print a summary of heliocentrism in 1540 (De libris revolutionum ... Nicolai Copernici ... narratio prima), and eventually to publish Copernicus's work in full, De revolutionibus. Already familiar with the scientific publishing of Johann Petreius at Nuremberg, Rheticus delivered Copernicus's manuscript (which survives at Jagiellonian Library at Cracow University) to Petreius in 1542 and acted as editor and proof-reader. When Rheticus left Nuremberg to take up a professorship at Leipzig, Andreas Osiander took over responsibility for proof-reading. Apparently fearful of a violent reaction against the work by the Church, Osiander wrote a prefatory address to the reader in which he attempted to placate in advance critics of Copernicus's theory. In it he stated that the work presents merely hypotheses which "need not be true or even probable; if they provide a calculus consistent with the observations, that alone is sufficient." Since a finished copy of the De revolutionibus only reached Copernicus on the eve of his death, his reaction to Osiander's address is unknown, but Rheticus and other Copernican disciples found it reprehensible. Several copies survive in which the address (and the last words of the title 'orbium coelestium', probably also a late addition by Osiander) is crossed through by Rheticus; Kepler denounced the address as the work of Osiander in 1609 in the introduction to his Astronomia nova (cf. Gingerich, Eye of Heaven).