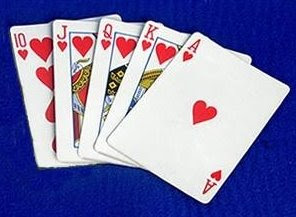 The New York Times
The troublesome toilet aboard the International Space Station appears to be working again, thanks to a replacement pump taken to the station by the shuttle Discovery.

"The toilet appears to have been repaired," said Rob Navias, the commentator for the National Aeronautics and Space Administration’s video channel on the Web, NASA TV.

The single toilet aboard the station has separate systems for dealing with solid and liquid waste, and the systems are designed to work without the help of gravity.

The solid waste system was operating properly, but the liquid system, which uses air flow to direct urine and store it in a receptacle, began malfunctioning more than a week before the shuttle’s arrival on Monday. A pump that separates urine from air and directs the urine into a tank failed; two spare pumps aboard the station were installed and failed as well.

To deal with the malfunctioning high-tech toilet while answering the call of nature, the two Russian cosmonauts and American astronaut who are living aboard the station had to go through a work-around procedure that took a great deal of time and wasted water. Oleg Kononenko, the cosmonaut who did the repair work, replaced the pump with the one delivered by the shuttle and tested the urine collection system.

NASA, anticipating that the fix might not work, had sent up enough backup urine collection devices so that the crew would be able to remain aboard the station until the next resupply ship arrives in September.

The alternate methods of waste disposal, including plastic bags with adhesive and bactericide known as "Apollo bags," because they were used by early astronauts, are not "particularly pleasant," Kirk Shireman, the head of the station program, said on Tuesday in a media briefing. They are, however, "tried and true devices for their intended purposes."

The problem with the toilet, while serious, has become a focus for jokes as the mission approached. When Cmdr. Mark Kelly of the Navy, the commander of the shuttle mission, first entered the station after docking on Monday, he asked, "You looking for a plumber?"

The main goal of this mission is installing the largest portion of a Japanese science module onto the station. That new room for the station, known as Kibo, or "hope," was attached on Tuesday, and at 5 p.m. Eastern time on Wednesday, Akihiko Hoshide, a member of the crew representing the Japanese space agency, held an opening ceremony. He called it "a great moment for the Japanese folks" and noted that it has taken 20 years to create the module and get it to space. "We have a new ‘hope’ on the space station," he said.

Mr. Hoshide then unveiled a banner over the door that read "Kibo" in Japanese, opened the hatch, and he and other members of the crew entered wearing protective goggles and masks in case debris liberated by the lack of gravity was floating around inside. The 10 members of the combined station and shuttle crew then tumbled and spun in the module, now the largest room on the station.

There was plenty of space for gamboling; the module was shipped to the station without any equipment inside, and will be outfitted later. Before entering, Mr. Hoshide said an engineer on Earth had said, "It looks really empty — but it’s full of dreams." 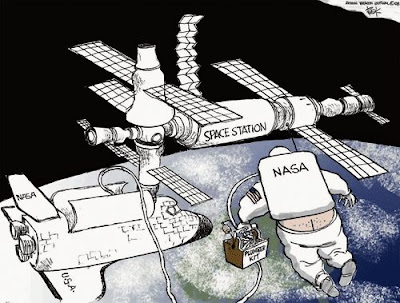 ISS has a serious problem--a broken toilet
Posted by Mercury at 7:18 PM