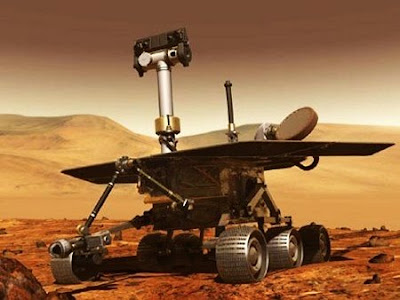 Mars rover Spirit
The little guys, Mars rovers Opportunity and Spirit, have done more and lasted longer than ever anticipated...and now the demise of Spirit may be imminent.

June 3rd, 2008
Energy production reached a record low for Spirit this past week. On Sol 1560 (May 23, 2008), solar array input was 220 watt-hours (enough energy to light a 100-watt bulb for two hours and 12 minutes). On sol 1563, Spirit expended the highest amount of energy yet on running heaters to maintain minimum temperatures for batteries (30.6 watt-hours) and the miniature thermal emission spectrometer (54.0 watt-hours).

Activity levels on Spirit have been kept low this week to compensate for the reduced energy production.

As was the case last week, Spirit had insufficient energy to transmit data to Earth each day. As a result, the operations team selected which Martian days, or sols, would be used for data downlinks to Earth.

Uplinks of communications from Earth have also been curtailed. Spirit typically has a daily communications window when the rover wakes up and points its High-Gain Antenna toward Earth and listens for new commands.

By passing up on some of these uplink opportunities, the rover is able to stay awake for shorter periods of time each sol. Rover operators still have the ability to send new commands if necessary.

As explained in last week's report, these Tau measurements of the amount of dust in the atmosphere provide valuable data for science and operations planning because they affect the amount of solar energy that reaches the rover's solar panels.

All subsystems are performing as expected.

In addition to receiving direct-from-Earth instructions over the rover's high-gain antenna, Spirit completed the following activities:

Sol 1559 (May 22, 2008): Spirit received new commands from Earth, measured atmospheric opacity caused by dust (Tau) with the panoramic camera and sent data to NASA's Odyssey orbiter to be relayed to Earth.

Sol 1566 (May 29, 2008): Spirit measured atmospheric opacity caused by dust with the panoramic camera and sent data to Odyssey to be relayed to Earth.