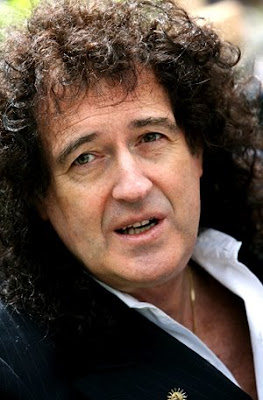 Brian May
Well, why not? Brian May, of the rock group Queen, has achieved his Ph. D. in astrophysics and written a book, Bang! The Complete History of the Universe, in collaboration with Sir Patrick Moore [astronomer] and Chris Lintott [astrophysicist]. I wonder what his thesis was and if it is available?

"From Queen to cosmos: Brian May gets his PhD"

That's Dr. May to you: Queen guitarist Brian May went back to school in London to earn his doctorate in astrophysics. His subject: dust in the (interplanetary) wind.

The musician who wrote 'We Will Rock You' went from the school of rock to graduate studies in astrophysics. He emerged with a book on the history of the universe and insight into interplanetary dust.

Brian May, lead guitarist for Queen and the author of the stadium anthem "We Will Rock You," was awarded his PhD this year in astrophysics from Imperial College London. Now his first book, "Bang! The Complete History of the Universe," written with astronomer Sir Patrick Moore and astrophysicist Chris Lintott, is being released in the U.S.

The book, inspired by physicist Stephen Hawking's "A Brief History of Time," is a tour of the cosmos from a microsecond after the Big Bang to when the Earth is a baking husk 5 billion years from now. While preparing to launch the band's latest tour, May, 60, took a short break to explain how a hard-core rocker was snared by the music of the spheres.

Which came first, science or music?

It was pretty much hand in hand. The two worked concurrently from the beginning, from the first time I saw Sir Patrick Moore [who has for 50 years hosted "The Sky at Night," one of the longest-running television shows in history]. I used to plead with my parents to be allowed to stay up and see it. You talk to any astronomer in the UK and they'll say their first inspiration was Patrick Moore. This wonderful music would come on, and you'd have these glimpses of the cosmos. I was completely enthralled by the whole thing. I wanted to be a musician and astronomer at the same time.

When did you start playing music?

About 7 years old. I was taught the ukulele by my dad. I asked for a guitar for my seventh birthday. It was way too big for me, and I had no idea how to tune it.

When you went to college, your training was in science.

Yes, it's curious, really, because I was very committed to music by that time. I was always in local groups from the age of 15. At Imperial College, nestled in among geology and physics and cosmic rays, was the Royal College of Music. I used to walk past every day, but I never went in.

When was Queen formed?

We were all at college. I put a notice up for a drummer. I was already working with a singer, but Freddie [Mercury, who became lead singer of Queen] was a friend of his.

So how did you decide to return to college for your doctorate?

It was one of those strange times when synchronicity happens. I took my old thesis notes [on the velocities of dust particles in the solar system] out on tour with me, and I mentioned on my website that I was looking at my thesis again. Who should read the website but the head of the astronomy department at Imperial College, Michael Robinson. He wrote to me and said, "If you're serious about this, I will be your supervisor." That's something you can't say no to. That's when the tough part began. It's not a piece of cake to get a PhD.

How has getting this degree changed your life?

It could have been an end, but it's been a beginning, because I'm now in touch with every astronomer who's into research on interplanetary dust. Oddly enough, I seem to have become part of a renaissance of this study. In recent times, most of the discoveries have come in cosmology, at huge distances. The kind of astronomy I was doing was right on our doorstep, less than 10 light-minutes away. It was a backwater until we started discovering dust clouds around other stars. Suddenly, as we're looking to find other planets like Earth, this has become a very hot topic. The best place to study these clouds is right here, because we're in one.

What did you find?

Most people who do astronomy on dust look at levels of light to find out the concentrations. What I was looking at were its movements. We were able to see dust traveling in the same direction as Earth, and we saw a hint of dust traveling in the opposite direction, and possibly a hint of dust drifting through the solar system, which is perhaps the most interesting of all. Because that's interstellar debris, the remnants of supernovas. It's the stuff of which we are made.

What does this tell us?

Quite a lot. It will yield clues to the way the Earth formed. Interstellar dust has been traveling for billions and billions of years. I've always been fascinated by the Joni Mitchell song where she says, "We are dust, we are golden."

I have a post at Imperial College, but I just can't commit the time. We're about to launch an American tour. The other big thing is "We Will Rock You" [a political satire built around Queen's hits]. It's not playing in the U.S. right now, but there's a show in Toronto.

Did songwriting influence your writing in the book?

I'm fascinated by this border between art for art's sake and art for an audience. It's a thin line you walk as an artist. If you go too far on one side, you're completely self-indulgent. On the other side, if you're obsessed with your audience, you lose your inner core. We've had that attitude in Queen, I think, through the years.

Your book reads a little like a not-so-brief history of time.

That had a lot to do with it. We'd all read Stephen Hawking's book and found it difficult. We wanted to write a book that could be bought and read by everyone who had an interest.

Some musicians, such as George Harrison, are obsessed with trying to answer the big questions of life surrounding myth and religion. Is that your turn of mind?

I don't think astronomy can ever answer the question "Why?" Science can link one thing with another. You look for patterns, for rules that explain what might happen.

It must be odd to travel in these two different communities, the rock world and the scientific establishment.

They are bloody different. It's fascinating for me to be able to walk into two rooms the same day, one filled with astronomers and one filled with musicians. I try and bring a little bit of each to the other, which can be good and can be dangerous. 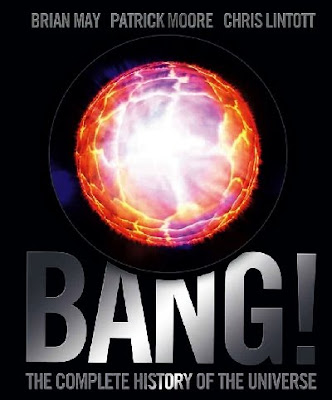 Bang! The Complete History of the Universe

Email ThisBlogThis!Share to TwitterShare to FacebookShare to Pinterest
Labels: astronomy, astrophysics, Bang--The Complete History of the Universe, Brian May, physics