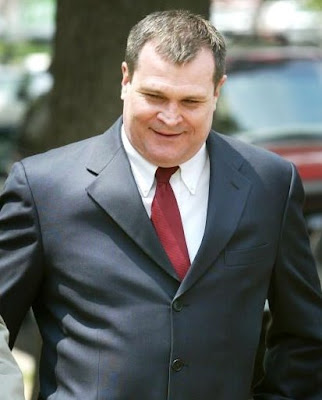 Steven J. Hatfill
In 2001 five innocent people died from anthrax poisoning...a tragedy indeed and a prime suspect was viciously pursued by the Federal Government in a hysteria to find someone culpable. Seven years later the "person of interest" [new term for "suspect"] was exonerated and the Federal Government punished for their tactics. The case has still not been resolved.

"Scientist Is Paid Millions by U.S. in Anthrax Suit"

The New York Times
The Justice Department announced Friday that it would pay $4.6 million to settle a lawsuit filed by Steven J. Hatfill, a former Army biodefense researcher intensively investigated as a "person of interest" in the deadly anthrax letters of 2001.

The settlement, consisting of $2.825 million in cash and an annuity paying Dr. Hatfill $150,000 a year for 20 years, brings to an end a five-year legal battle that had recently threatened a reporter with large fines for declining to name sources she said she did not recall.

Dr. Hatfill, who worked at the Army's laboratory at Fort Detrick in Frederick, Md., in the late 1990s, was the subject of a flood of news media coverage beginning in mid-2002, after television cameras showed Federal Bureau of Investigation agents in biohazard suits searching his apartment near the Army base. He was later named a "person of interest" in the case by then Attorney General John Ashcroft, speaking on national television.

In a news conference in August 2002, Dr. Hatfill tearfully denied that he had anything to do with the anthrax letters and said irresponsible news media coverage based on government leaks had destroyed his reputation.

Dr. Hatfill's lawsuit, filed in 2003, accused F.B.I. agents and Justice Department officials involved in the criminal investigation of the anthrax mailings of leaking information about him to the news media in violation of the Privacy Act. In order to prove their case, his lawyers took depositions from key F.B.I. investigators, senior officials and a number of reporters who had covered the investigation.

Mark Grannis, a lawyer for Dr. Hatfill, said his client was pleased with the settlement.

"The good news is that we still live in a country where a guy who's been horribly abused can go to a judge and say 'I need your help,' and maybe it takes a while, but he gets justice," Mr. Grannis said.

The settlement, Mr. Grannis said, "means that Steven Hatfill is finally an ex-person of interest."

In a written statement, Mr. Grannis and Dr. Hatfill's other lawyers said, "We can only hope that the individuals and institutions involved are sufficiently chastened by this episode to deter similar destruction of private citizens in the future — and that we will all read anonymously sourced news reports with a great deal more skepticism."

The lawyers will take their fee out of the settlement, which will pay out $5.8 million over 20 years. The $4.6 million figure is the cost of the annuity to the government.

The settlement called new attention to the fact that nearly seven years after the toxic letters were mailed, killing five people and sickening at least 17 others, the case has not been solved.

A Justice Department spokesman, Brian Roehrkasse, said in a statement that the government admitted no liability but decided settlement was "in the best interest of the United States."

"The government remains resolute in its investigation into the anthrax attacks, which killed five individuals and sickened others after lethal anthrax powder was sent through the United States mail," Mr. Roehrkasse said.

An F.B.I. spokesman, Jason Pack, said the anthrax investigation "is one of the largest and most complex investigations ever conducted by law enforcement" and is currently being pursued by more than 20 agents of the F.B.I. and the Postal Inspection Service.

"Solving this case is a top priority for the F.B.I. and for the family members of the victims who were killed," Mr. Pack said.

But Representative Rush Holt, a New Jersey Democrat whose district was the site of a postal box believed to have been used in the attacks, said he would press Robert S. Mueller III, director of the F.B.I., for more answers about the status of the case.

"As today's settlement announcement confirms, this case was botched from the very beginning," Mr. Holt said. "The F.B.I. did a poor job of collecting evidence, and then inappropriately focused on one individual as a suspect for too long, developing an erroneous theory of the case that has led to this very expensive dead end."

Dr. Hatfill subpoenaed Washington journalists to try to learn which federal officials had spoken to the news media about the case against him in possible violation of federal privacy laws.

Toni Locy, a former legal affairs reporter for USA Today who wrote several articles about the case, was held in contempt of court, facing fines of up to $5,000 a day from Judge Reggie Walton over her refusal to name her sources, and her case is pending before an appeals court. Ms. Locy said Friday that she was relieved by the developments but that it was too soon to celebrate.

"I hope this means that this ordeal is over and that I can get on with my life," said Ms. Locy, who will begin teaching legal reporting at Washington and Lee University in the fall.

She said Dr. Hatfill's lawyers said they no longer needed her testimony, though she had not been told whether the contempt order against her had been lifted.

The outcome differed significantly from the settlement of a similar case involving Wen Ho Lee, a former nuclear scientist once suspected of espionage. In that case, five news organizations joined the government's settlement, agreeing to pay a total of $750,000 to prevent their reporters from having to testify about their sources.

Ms. Locy said that a federal mediator had tried to get Gannett, which owns USA Today, to negotiate some type of settlement with Dr. Hatfill's lawyers, but that it had refused

She called the result an important affirmation of journalists' ability to use confidential sources in gathering material on important news stories. "I protected my sources, and that’s important," she said.

Dr. Hatfill also sued The New York Times and the columnist Nicholas D. Kristof, saying that columns Mr. Kristof wrote about the case had libeled him by suggesting that he might be the anthrax mailer. That lawsuit was dismissed last year, but Dr. Hatfill has appealed the dismissal.

The former Army scientist also sued Vanity Fair and the author of an article about the case in the magazine, Donald Foster, as well as Reader’s Digest, which published a condensed version. That case was settled last year on confidential terms.

Dr. Hatfill, 54, grew up in Illinois but studied medicine in Rhodesia, now Zimbabwe. After returning to the United States in the early 1990s, he worked at the National Institutes of Health and the United States Army Medical Research Institute for Infectious Diseases at Fort Detrick. In applying for those jobs, he claimed to have had a Ph.D. from a South African university that his lawyers later admitted he had not earned.

After Dr. Hatfill came under suspicion in the anthrax case in 2002, an F.B.I. surveillance team began following him everywhere, and a small motorcade sometimes trailed his car around Washington.

In May 2003, an F.B.I. surveillance car ran over Dr. Hatfill's foot in Georgetown as he approached the car to take the driver's picture. He was given a ticket for "walking to create a hazard" and was fined $5.

This is exactly why I worry about the Patriot Act. How many times do we have to watch as Government Agencies spy on such radical movements Amish peace activists!?!?!? The whole problem is that we give power to morns who are not punished for absolutely violating the sanctity of dissent. Look at what the Kennedy's did to Martin Luther King. I still cannot, under the Freedom of Information Act, have copies of Mr. King carrying on in motel rooms.