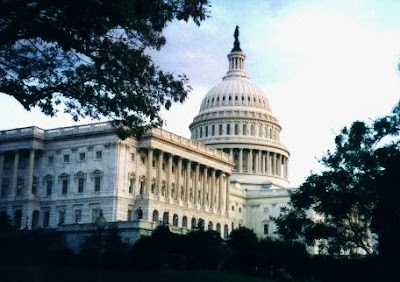 The token scientists will make no difference in congress save perhaps on a very small scale. The task of convincing other congressmen to follow dictates of science when it would drastically conflict with constituents's expectations based not on sound science but economics is nearly impossible. I cannot envision any ground swell changes based on science or the congressional scientists.

"Physicists in Congress Calculate Their Influence"

According to the Congressional Research Service, there are only about 30 scientists among the 535 senators and representatives in the 110th Congress, and that is counting the psychologist, the psychiatrist, a dozen other M.D.’s, three nurses, an engineer, two veterinarians, a pharmacist and an optometrist.

But physics is on a roll.

"Go back 15 years, and there weren’t any physicists," said Vernon J. Ehlers, a Republican who taught the subject at Calvin College in Grand Rapids, Mich., until he was elected to Congress in 1993.

His was a lone voice until 1998, when Rush Holt, assistant director of the Princeton Plasma Physics laboratory, won election from New Jersey as a Democrat. And today there are three, adding Bill Foster, a physicist at Fermilab and another Democrat, who won a special election in March in Illinois.

"If we continue to reproduce in this manner," Mr. Foster began, and Mr. Ehlers finished the thought, "the entire Congress would consist of physicists!"

They were joking — probably. But a Congress full of physicists might solve some worrisome problems, the three-member physics caucus argued one afternoon when they met for a joint interview in the Capitol.

There are 435 people in the House, Mr. Holt said, and "420 don't know much about science and choose not to." He recalled his exasperation when anthrax spores were discovered in the Capitol in 2001 and colleagues came to him and said, "You are a scientist, you must know about anthrax," a subject ordinarily missing from the physics curriculum.

"The difference," he said, "is we would be perfectly happy to pick up a copy of The New England Journal of Medicine and read about the etiology of anthrax."

"In fact, we basically did that," Mr. Ehlers said.

"We know more than our colleagues," Mr. Holt said, "but not more than they could know."

Unfortunately, Mr. Foster said, "unless things play to their advantage in the next election, they are not interested."

Not everyone agrees with that assessment. Sherwood L. Boehlert, the upstate New York Republican who until last year was chairman of the House Science Committee, said that what citizens should expect from their elected representatives is not knowledge of science per se, but rather "an ability to reach out to experts in any given field and then do what is oftentimes hard for elected officials to do, listen instead of talk."

(For his part, Mr. Boehlert said, his last exposure to science was in a high school physics class, "and I got a C.")

Problems arise not just in obviously science-related issues, but also, as Mr. Holt put it, in "those countless issues, and it really is countless, that have scientific and technological components but the issues are not seen as science issues."

He cited the debates over electronic voting machines that caused problems "that would be obvious to any computer scientist but went right past some people here in Congress."

Mr. Foster mentioned the debates over electronic border fences, which he said lacked "fundamental concepts of what radar can or cannot do."

What is needed is not more advanced degrees, the physicists said (they all have Ph.D.'s), but a capacity to take the long view, what Mr. Ehlers called the scientists’ ability to see from the pre-Cambrian era to the space age.

But sometimes, he said, the problem is just old-fashioned ignorance. Several times he has found himself “rushing to the floor” to head off colleagues ready to eliminate financing for endeavors whose importance they did not understand.

Once it was game theory. The person seeking the cut did not seem to realize that game theory had to do with interactions in economics, behavior and other social sciences, not sports, Mr. Ehlers recounted.

Then there was the time he rose to defend A.T.M. research against a colleague who thought it should be left to the banking industry. In this case the initials stood for asynchronous transfer mode, a protocol for fiber-optic data transfer.

"'The Two Cultures' is not a myth," Mr. Holt said, referring to a 1959 lecture by the British chemist and novelist C. P. Snow, who bemoaned a growing gulf between the sciences and the humanities.

Mr. Ehlers agreed, saying he had as much right to expect that his colleagues would understand basic physics concepts as they had to expect that he would be familiar with Shakespeare. "It’' utterly stupid that we have to fight that," he said.

But there are barriers to drawing more scientists into politics. For one, Mr. Holt said, many researchers have the idea that "politics is somehow dirty."

That was never an issue for him or Mr. Foster — both came from political families. Mr. Holt’s father represented West Virginia in the Senate from 1935 to 1941, and Mr. Foster’s parents met when they worked on Capitol Hill. And Mr. Ehlers came up through the Republican ranks, finally winning the seat once held by President Gerald R. Ford.

When Ford was in Congress, Mr. Ehlers gathered a committee of scientists to meet with him from time to time on difficult scientific questions. These days, though, there is less "comity" in Congress, he said, and fellow scientists tell him they wonder why he stays involved. "They say, 'I am glad you are there, but I think you are crazy.'"

All three physicists had the same advice for whoever wins the White House this fall. Move quickly to appoint a science adviser and keep that person in the presidential inner circle.

Among other things, they said, a science adviser should be someone who will remind the next administration what science can and cannot do.

For example, Mr. Ehlers said, it is irksome to encounter people who ignore the scientific consensus that human activity contributes to global warming yet count on science to produce new sources of energy magically. "They sort of reject our reasoning," he said. "But they will come back and say, 'Science will find a way.'"

All three say they have thought about returning one day to full-time physics. When life in Congress becomes unusually frustrating, Mr. Ehlers said, "I think, well, it would be great to be in the lab today."

Still, they say, they manage to overcome any intellectual disconnect between the more or less orderly laws of physics and the sausage-making aspects of legislation. "Physicists are versatile," Mr. Ehlers said. "We live in the real world."

After all, their caucus is growing.

"We’ve done the calculation," Mr. Holt said. "By midcentury, I think, we’ll have a functioning majority."

"A physicist’s place is on the ballot"

Few elected officials, from the President to members of the local school board, have strong backgrounds in science or engineering. Yet, many of the complex problems we face—in areas such as innovation and competitiveness, health care, energy, climate change, education, and even our physical infrastructure—have policy solutions that depend on an understanding of the sciences.

It's time more scientists got involved in politics. Scientists have a contribution to make to public life. They have a way of thinking that is transferable to the policy realm; problem-solving, evidence-based thinking and testing hypotheses are all likely to generate good policy.

Just as important, scientists have specific knowledge that policymakers from other disciplines lack. Training in law (the background of many of our legislators) is useful for thinking rationally and weighing evidence, but it does not enhance understanding of the importance of nanotechnology, public health strategies, or the processes at work in climate change. These are all areas of knowledge critical to finding solutions to the obstacles we face. Further, the more diverse the expertise and experience a legislature has to draw on, the more likely it is to come up with innovative solutions that will keep us on the right track.

Eight members of the US House of Representatives hold doctoral degrees in science, including the newest addition, Bill Foster of Illinois, who is the third physicist. These scientists have contributed to law and policy in important ways, as have many who serve in state and local government. They are proof that it is possible to serve one’s community not only in the lab, but also in civic life.

It’s easier than you think to get involved. The local school board is a great place to start. There are about 15,000 school boards in the United States, the vast majority of them elected. Most campaigns cost less than $1000—though in bigger cities the cost is closer to $10,000—and serving may mean a commitment of about five hours a week. Yet this commitment is minor considering the important contributions a scientist can make.

Who better than a scientist to evaluate science, technology, engineering, and mathematics curricula? In some parts of the country, people are searching for innovative ways to insert creationism into science classes. A scientist can keep this from happening by explaining the difference between a scientific theory and an untestable hypothesis. Even in localities where intelligent design is not an issue, we are struggling to find effective ways to help our students learn cutting-edge material so they are prepared for an increasingly competitive world. Study after study shows children in the United States are falling behind in critical areas of math and science; publicizing this issue has not made it go away. But, serving on a school board where you can help evaluate your community’s educational programs and options could be a step in the right direction.

For those interested in learning more about running for office, Scientists and Engineers for America, along with a group of scientific societies, scheduled a May 10th workshop in Washington, DC, to teach scientists and engineers the nuts and bolts of running a campaign.

Even if running for office is not on your horizon, it is important to take action. Most scientists believe science should have a place at the table when important policy decisions are made; scientific advisory boards should include the best scientists available; scientists working for the government should be free to discuss their research, regardless of the political implications; and when science is misrepresented by the government, people who speak out should not fear retribution. Yet, well-documented breaches of these principles have become all too common. To ensure that our government values science, we must demonstrate that we value it, both by asking candidates for office hard questions and through the ballot box.

If scientists invest time and energy in politics, whether by running for office or by making sure that potential representatives know what their constituents value, policy will change for the better. Not getting involved means accepting the status quo.

Lesley Stone is executive director of Scientists and Engineers for America.
Posted by Mercury at 12:12 PM