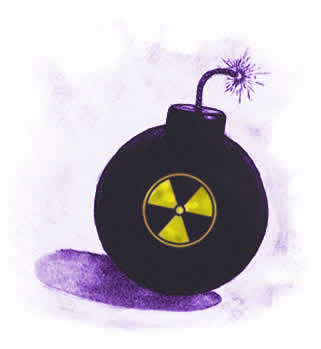 Michael W. Wynne and Gen. T. Michael Moseley--incompetent...a trend...status quo? These are news making situations and one wonders how many are unknown or unreported. We still live in fear. One has to question whether ethical breaches constitute criminal actions. Defense Secretary Robert M. Gates is on the correct track...remember what he did concerning Walter Reed Army Medical Center.

"2 Top Leaders of Air Force Pushed Out After Inquiry"

The Air Force's senior civilian official and its highest-ranking general were ousted by Defense Secretary Robert M. Gates on Thursday following an official inquiry into the mishandling of nuclear weapons and components, senior Pentagon officials said.

The Air Force secretary, Michael W. Wynne, and the service’s chief of staff, Gen. T. Michael Moseley, were forced to resign after the inquiry found that both leaders were responsible for "systematic and cultural failings in how the Air Force carried out its important mission to assure the security of the nation’s nuclear arsenal," according to a senior Pentagon officials.

Never before has a defense secretary ousted both a service secretary and a service chief, according to senior Pentagon officials. Since taking office 18 months ago, Mr. Gates has made accountability of theme of his tenure. He has also fired senior Army officials, after disclosures of shoddy conditions at Walter Reed Army Medical Center, the service’s premier medical facility for wounded soldiers.

The inquiry involving the Air Force was an effort to determine how four high-tech electrical nosecone fuses for Minuteman nuclear warheads were sent to Taiwan in place of helicopter batteries. The mistake was discovered in March - a year and a half after the erroneous shipment.

Most troubling, the senior Pentagon official said, was that little had been done to improve the security of the nuclear weapons infrastructure after it was disclosed last year that the Air Force unknowingly let a B-52 bomber fly across the United States carrying six armed nuclear cruise missiles.

The mishandling of the nosecone fuses was viewed as another indication of lack of discipline within America’s nuclear infrastructure, and was another embarrassment for the people in charge of those weapons.

Last year, the Air Force disclosed that it unwittingly let a B-52 bomber carrying six armed nuclear cruise missiles fly from Minot Air Force Base in North Dakota to Barksdale Air Force Base in Louisiana last August. About 36 hours passed before the missiles were properly secured, officials have said.

Those errors in handling nuclear weapons components was more than just an indication that the cold war-era focus on these powerful weapons had become fuzzy. It put the Bush administration in a difficult position, as the United States government is struggling to prevent the technology for nuclear weapons from spreading to nations that do not already have them and has criticized North Korea and Iran for their nuclear ambitions, and even criticized Russia for not sufficiently safeguarding its stockpile.

After the incident with the nosecone fuses was discovered, Mr. Gates told the Air Force and Navy secretaries "to conduct a comprehensive review of all policies, procedures, as well as a physical site inventory of all nuclear and nuclear-associated material equipment across their respective programs."

Adm. Kirkland H. Donald, the director of Navy Nuclear Propulsion, the head of the investigation, gave his report to Mr. Gates last week.

A separate inquiry into contracts for the Air Force’s flying stunt team, the Thunderbirds, had added to the service’s troubles over recent months.

In April, a Pentagon investigation found a $50 million contract to promote the Thunderbirds was tainted by improper influence and preferential treatment. No criminal conduct was found, but three officials were subjected to administrative penalties.

Those specific incidents only added to a sense of frustration Mr. Gates has felt toward some Air Force actions regarding weapons procurement, budgets and execution of the mission in Iraq and Afghanistan, according to his aides.

Mr. Gates has said he has been struggling for months to bring more surveillance aircraft to the war zones of Iraq and Afghanistan.

The Air Force has more than doubled the number of armed Predator and Reaper hunter-killer aircraft over Iraq and Afghanistan since last early last year, but aides to Mr. Gates said he was still unsatisfied, and he appointed a task force to accelerate surveillance vehicles into the combat zone.

The expected replacement of the top Air Force officials is similar to Mr. Gates's decisions in March 2007 after disclosures of shoddy conditions at Walter Reed.

Francis J. Harvey was forced by Mr. Gates to resign as Army secretary. That action followed by a day a decision that the two-star general in charge of Walter Reed, Maj. Gen. George W. Weightman, would be relieved of command.
Posted by Mercury at 3:31 PM