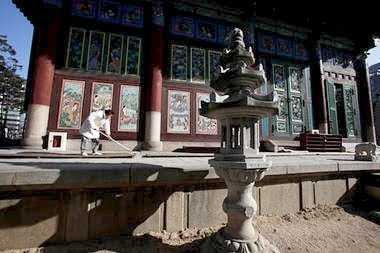 Is it all about real estate and money?

Recent cases of arson highlight the issue of protection of South Korea's historic buildings – and the level of disconnect some see between many Koreans and their cultural heritage.

The Christian Science Monitor
A symbolic gate at an ancient Buddhist temple in South Korea burned to the ground in December, robbing a country with a richly textured past of yet another slice of its cultural history. It was the latest blow to an already small number of historical buildings that culturalists say have been brutally ravaged throughout the past century by a combination of colonization, war, and rapid economic development.

The incident involving the destruction of a site more than 1,300 years old, comes after a series of arson attacks on traditional buildings in recent years. Those include Seoul’s iconic 600-year-old Namdaemun Gate, Seoul's Changgyeong Palace, a World Heritage site, and an 18th-century command post at the city of Suwon’s Hwasong Fortress. At the time of the incidents critics lambasted the lack of protection for the country’s historical structures against vandalism, some calling for stricter laws.

But it's not just crimes of arson, often carried out by angry individuals seeking to lash out at the government, that are threatening South Korea's cultural heritage. City governments have tended to replace traditional buildings with larger, more modern structures in a revitalization effort to keep pace with South Korea's rapid economic growth. The most visible example has been the plight of traditional wooden homes known in Korean as hanok – razed to make way for skyskraping apartment buildings.

For preservationists, such incidents strip the country of its uniquely Korean face. Some argue many Koreans have lost touch with their own traditions and culture in the face of the tumultuous 20th century on the Korean Peninsula.

Like the Chinese, some preservationists say, Koreans are coming to prefer shiny new buildings, which they perceive as offering a greater sense of comfort and convenience.

In 2009, the hanok neighborhood of Ikseon-dong in Seoul was the center of preservation efforts by city officials. But the moves to protect the buildings came up against an unlikely foe: the owners themselves. Some told local press they would prefer the hanok were razed and replaced with apartment buildings as long as they were provided with one of the new residences.

Park Kwang-hee of the Cultural Heritage Administration of Korea says the disappearance of hanok and what for some appears to be a growing indifference to cultural preservation within the country could just be linked to their perceived incompatibility with modern life. “Hanok are made of wood and there are great limits on the size or frame,” he explains. “Also, the materials to build hanok are not easy to find.”

Destruction in times of foreign occupation and war

Historians note Korea lost almost all of its indigenous buildings in three rough waves during the 20th century – up to 90 percent of its nonreligious architecture by some estimates.

First, the Japanese colonial occupation from 1910 to 1945 saw widespread cultural destruction. Perhaps the most significant of them was Gyeongbokgung, the centerpiece palace of the Joseon Dynasty that ruled Korea until Japan invaded and toppled the royal family. Most of the palace complex was destroyed and made way for the headquarters of the Japanese Governor-General, though efforts have been ongoing for more than 20 years to restore the site.

The fratricidal Korean War of 1950 to 1953 then wrought massive destruction, particularly on Seoul. Andrew Salmon, a historian, says most residences in Seoul were hanok at the close of the fighting, with the exception of those built during the 35 years of Japanese colonial rule.

“Due to the street fighting – particularly when US Marines captured it from North Korean forces in September 1951," he explains, "entire swaths of the city were obliterated, though some lucky districts were untouched."

And the rapid economic growth beginning in the late 1960s saw function and modernity supplant tradition, as represented by the emergence of the sprawling skyscrapers of Gangnam on the south side of the Han River that divides the modern city of Seoul. Before 1970 it was merely an expanse of mostly farmers' fields – until the Korean "economic miracle" outgrew the old heart of the capital.

“Because Koreans have been through many difficult times, including wars and chaotic periods, they could not concentrate wholly on the preservation of the traditional buildings,” says Lee Sung-suk, of the Hanok Cultural Center in Seoul. Because of such history he calls the shift toward modern apartments and skyscrapers “inevitable.”

From the US to China to Korea, instances of “cultural vandalism” occur almost everywhere. “The problem in Korea,” says Briton David Kilburn, a longtime Seoul resident and champion of hanok, “is that so many people no longer feel a strong relationship with their heritage or value it highly. This, in turn, leads to neglect, which inevitably becomes a pathway to decay and destruction.”

Mr. Kilburn lives in a government-designated hanok neighborhood ostensibly protected by preservation laws. Until recently, the famous district, known as Bukchon, had 2,500 hanok, homes built out of wood and characterized by their traditional courtyards. Today the number even here – where tourists flock to take pictures of "traditional" South Korea, has fallen to around 800.

Though many Koreans express fondness for the products of their past, few fight for their survival, argues Kilburn. “The cultural heritage found in the daily life of ordinary people is largely overlooked. As a result, hanok and all the artifacts of daily life a century ago are becoming rarities.”

Kilburn insists the preservation policies for Bukchon do not work. "City officials routinely approve wholesale demolition in order to erect new structures," he proclaims on a website he operates to promote hanok preservation.

Another approach to preservation

“Given the historic importance of cultural heritage and public resources,” he says, “the convicted should be punished accordingly and thoroughly.”

Kim Do-kyung, a professor of architecture at Kangwon University, based in the northeast city of Chuncheon, believes the punishment for attacking sites of national significance needs to reflect the gravity of the crime committed.

A report last year in the China Daily cited a Beijing government official as saying a Chinese building will last on average about 30 years, compared with 74 years in the US and 132 years in Britain.

Still, Mr. Park of the Cultural Heritage Administration of Korea says he has hope, “As Korean society has become more mature and stable, many people have actually started to care a lot about their own culture.” For example, he says, nationally governed projects are planned to improve and broaden the spread of hanok. Preservation for temples could follow.

And a possible silver lining to high-profile vandalism and arson cases, says Park: “I think through these incidents people are becoming more aware of the preservation of traditional buildings.”
Posted by Mercury at 5:50 PM