Curious piece from a royal tomb in Guatemala 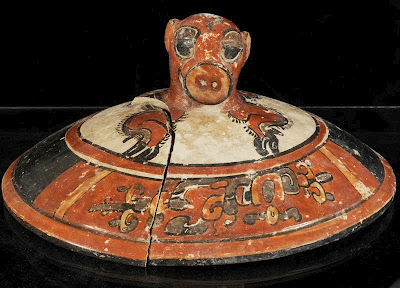 No people, it isn't an alien in a flying saucer. Archaeology magazine has listed it as one of ten best discoveries of 2010.

Archaeology
A deep looters' trench led archaeologists to a series of amazing, macabre finds beneath the El Diablo pyramid at the modest Maya city of El Zotz. They discovered, just 10 feet beyond where the looters had stopped digging, increasingly bizarre caches, including bowls containing severed fingers, teeth, and a partially cremated infant. "There was mounting evidence of weirdness there," says Stephen Houston of Brown University, who co-led the excavation with Edwin Roman of the Universities of Texas and San Carlos of Guatemala.

The offerings were adjacent to an Early Classic Maya tomb containing the remains of a king dressed as a ritual dancer, complete with a belt adorned with shell "bells" and mammal teeth. "This guy would have made quite a racket," says Houston. He was buried with the skeletons of four infants, the skulls of two older children, textiles, carvings, and an array of ceramics, including a tamale bowl depicting a peccary.

Based on the position, wealth, and date of the tomb (A.D. 350), researchers believe the king may have been the founder of a dynasty. The tomb is located in a palatial complex high above the central part of the ancient city, next to a spectacular stuccoed pyramid that would have been visible for miles around. "We're looking at the way in which the Maya create dynasties," says Houston. "You do it with a loud crash of cymbals."

The discovery also shows that even sites hit hard by looters have much to offer. "It's just a miracle this thing wasn't looted," says Houston.
Posted by Mercury at 8:36 PM