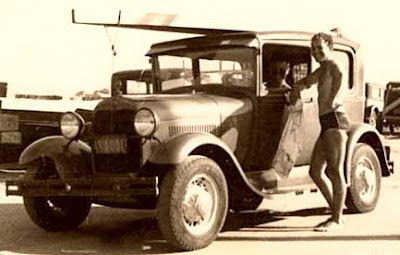 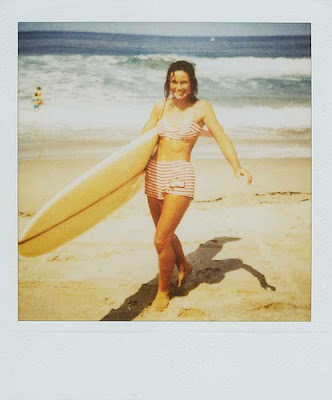 The images by photographer LeRoy Grannis helped popularize and immortalize the sport —and the life behind it — at a crucial point in its history. 'His photos captured the real thing,' wrote surfing journalist Steve Barilotti.

Los Angeles Times
LeRoy Grannis, a noted photographer whose widely printed images captured and popularized the surf culture of California as it exploded in the 1960s and '70s, has died. He was 93.

Grannis, who also co-founded what is now Surfing magazine, died Thursday of natural causes at a Torrance nursing facility, said his son John.

"There's surfing royalty, and he was one of the kings," his son said. "He inspired so many big-name photographers that consider him their mentor."

His photographs "caught surfing at a critical juncture between cult and culture," wrote Steve Barilotti in the introduction to "LeRoy Grannis: Surf Photography of the 1960s and 1970s," a $400 limited-edition 2006 book.

While his photos of grass shacks and woody station wagons evoke nostalgia, Grannis "was documenting surfing's rapid evolution into an iconic lifestyle," Barilotti wrote. "His photos captured the real thing, providing a bridge between the world of Beach Boy lyrics and the reality of the Southern California beach scene."

The Surfing Walk of Fame in Huntington Beach, which added Grannis in 1999, saluted him for creating "many of the 1960s' most enduring surfing images."

He freeze-framed fresh-scrubbed surfers riding longboards without leashes but also swung his camera around to record the evolving surf culture in California and Hawaii. For every "Greg Noll About to Eat It, Waimea Bay (Oahu), 1966" there was a scene-setter such as the "Aussie Surf Wagon" in Hermosa Beach plastered with such slogans as "The Young Wave Hunters" and "Malibu or Bust."

In a 2006 review of the limited-edition book, The Times said Grannis "helped to innovate a style of art. … The book has the effect of a time capsule, bringing back an era that continues to resonate for us in shades of Technicolor and black and white. "

Evan Slater, then the editor of Surfing magazine, told the San Diego Union-Tribune in 2006 that Grannis was "a surfer first, but he was also one of the first surfers to realize our sport needed to be documented properly" as he became "a key founding father of surf media and surf photography."

Although he often shot from shore with a long lens, Grannis in 1963 bought a Calypso underwater camera, invented by oceanographer Jacques Cousteau, and waded into the water.

A year later, Grannis started developing a waterproof camera housing that attached to the nose of a surfboard, which allowed him to stay closer to the action and avoid returning to shore to change film.

His photographs became known for their intimacy, nuance and emotionalism. Much of his best work was in black and white and seemed to have a unique blending of light and shadow, according to "The Encyclopedia of Surfing" (2003) by Matt Warshaw.

Grannis differentiated himself from other surf photographers of his era by making pictures that had "a texture about them that was somehow palpable, even in published form," Brad Barrett wrote in "Photo: Grannis," a 1998 collection of his seminal work from the 1960s.

Although Grannis started surfing as a teen, he came to surf photography at 42 in 1959, a family man under doctor's orders to find a relaxing hobby to escape the stress from his job with the telephone company.

"I started chasing good surf, and what was a hobby became a lot more," Grannis told The Times in 2005.

"Surfing was becoming immensely popular. … And the 'Gidget' movie had struck a chord," he said. "Suddenly everyone wanted to surf, or at least look like surfers."

Encouraged by his good friend, pioneering surf photographer John Heath "Doc" Ball, Grannis bought an inexpensive 35-millimeter East German camera and built a darkroom in his garage. He started out selling photos for $1 apiece to Hermosa Beach surfers starved for images of themselves.

His first professional photographs were purchased for $5 apiece in 1960 by Reef, an early but short-lived surf magazine. During the decade, his photos would run in every major surfing publication.

Most of the year, he shot along the Southern California coast, but every December from 1961 to 1966 he went to Hawaii, often shooting at Oahu's famed North Shore.

Tired of increased competition for the perfect angle and annoyed by media coverage of surfing, Grannis walked away from professional surf photography in 1971.

"I didn't like the way the magazines were going. They were making heroes out of druggies and guys with big mouths, so I bailed out," Grannis told the London Daily Telegraph in 2003.

He also blamed the introduction of short boards around 1968 for contributing to the changing surf culture. Lighter, less-wieldy boards made it easier for young, sometimes smart-alecky kids to get involved, he said.

Grannis was born Aug. 12, 1917, at his parents' home less than a block from the Hermosa Beach surf. In second grade, he earned a nickname that stuck: "Granny."

Morning swims with his father at age 5 gave way to surfing by the time Grannis was 14. He carved his first surfboard out of a 6-foot slab of pine.

"There were probably only 200 or so surfers in California then, and everyone knew each other," Grannis told The Times in 2005. "There was none of this provincialism. There were more than enough waves for everyone."

In 1936, he became a member of the nascent Palos Verdes Surf Club, the first significant group of its type. Weekly meetings were held in a spare room in Ball's dental office.

A courtship with Grannis' future wife, Katie, began with a tandem surf ride in 1938, and they married a year later.

At 23, he was a day laborer for Standard Oil in El Segundo and worked his way up to boilermaker. By pulling night shifts, he found time to surf, and in the 1930s and '40s was one of the state's top wave riders, the surfing encyclopedia said.

World War II scattered his surfing crowd as almost everyone joined the service. He enlisted in the Army Air Forces, trained as a pilot and became a flight instructor.

Within weeks of the war's end in 1945, Grannis was walking along the beach in Malibu when he saw a dozen surfers and pronounced the place "ruined."

"Before the war, you'd call somebody because you didn't want to surf alone," Grannis told Surfer's Journal in 1999. "What we considered to be a crowd, back then, would be a beautiful day today."

He signed on to install switchboards for Pacific Bell Telephone before becoming a manager, staying with the company for three decades as he and his wife raised four children. After retiring from the phone company in the late 1970s, he moved to Carlsbad.

In his 50s, he took up hang-gliding and was briefly a photographer for Hang Gliding magazine. Several broken bones, including a badly fractured leg, caused him to turn to windsurfing in his 60s. He participated in and photographed the sport until the late 1980s.

In "Surfing for Life," a 1999 documentary about elderly surfers, Grannis reminisced about the strong bonds of that early 20th century dawn patrol.

"All the fellas that I surfed with back in the '30s that are still alive, we're still in contact with each other," Grannis said when he was about 82. "And whenever possible, we get together and surf together."

Besides his son John of Hermosa Beach, Grannis is survived by three other children, Nancy of Sonora, Calif.; Kit of Carlsbad; and Frank of Burien, Wash.; six grandchildren; three great-grandchildren; and one great-great-granddaughter.

A paddle-out memorial is being planned for Palos Verdes Cove in June.
Posted by Mercury at 5:10 PM