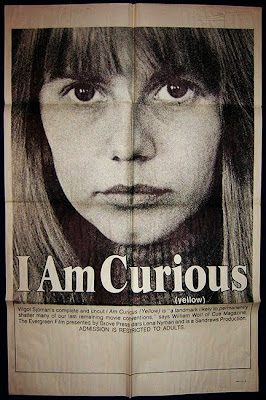 Lena Nyman
May 23rd, 1944 to February 4th, 2011
This is a significant obituary in that it is representative of an era of political, social, and sexual revolutions. The film that Nyman is so famous for is terribly mild by today's offerings of sexuality. In my city splitting Kansas and Missouri there were at least six art film houses offering titillating sexual farces and serious cinema contenders like Bergman, Fellini, Kurosawa, Godard, etc. Now there were two theaters [Kimo (Missouri) and Kimo South (Kansas)] offering the latest imports from Sweden and France that for the most part were exploitation films...the "I am Curious" films. Kansas decided that I am Curious Yellow [Kimo South] was obscene and was being publicly burned while at the same time I am Curious Yellow was being screened at the Kimo [Missouri]--go figure.

The New York Times
Lena Nyman, the Swedish actress whose performance in the sexually explicit movie “I Am Curious (Yellow)” raised the hackles of censors in the 1960s and helped turn the film into a box office bonanza, died on Friday in Stockholm. She was 66.

Ms. Nyman went on to a distinguished career after “I Am Curious.” In all, she had roles in more than 50 Swedish films and television shows, notably Ingmar Bergman’s “Autumn Sonata” in 1978, in which she played the mentally impaired sister to Liv Ullmann’s accomplished pianist.

But it was in “I Am Curious” that she made perhaps her most indelible mark. In the film Ms. Nyman portrayed an intensely serious young woman, also named Lena, who wanders Stockholm as an amateur reporter, raising questions about mores that seem to her to have calcified Swedish life. She asks people if Sweden really is a classless society and badgers union officials about why the labor movement is so conservative.

Searching for her own sexual identity, Lena has a stormy affair with Borje (played by Borje Ahlstedt), after she meets him in a store. They have sex in a tree and on a balustrade in front of the royal palace, among other places.

Produced for $160,000 by the Swedish filmmaker Vilgot Sjoman, “I Am Curious (Yellow)” alarmed the United States Customs Service, which in January 1968 banned it from the country as obscene. That November a federal appeals court ruled that the movie was protected by the First Amendment, resulting in its release in March 1969. The movie made $5 million in six months and remained the most financially successful foreign film in the United States for 23 years.

If “the cavemen of the U.S. Customs office” hadn’t seized “I Am Curious (Yellow),” Newsweek wrote in March 1969, “there probably wouldn’t be thousands upon thousands of people standing on lines today for the privilege of paying $4.50 to see the movie.”

Reviews were mixed. “Miss Nyman’s performance is monotonous, and her only redeeming vice is her anger, which seems genuine and illimitable,” Joseph Morgenstern wrote in Newsweek. In The New York Times, Vincent Canby wrote, “Lena Nyman and Borje Ahlstedt are good, in addition to being perfectly presentable, in the central roles.” He added that the sex scenes were “so unaffectedly frank as to be nonpornographic.”

In Sweden some critics saw the film as offensive. Because of her full figure, others called Ms. Nyman fat. That did not deter her. In 1968 she again played Lena in “I Am Curious (Blue),” almost a reprise of “Yellow.” (The Swedish flag is blue and yellow.)

Ms. Nyman, who was born on May 23, 1944, in Stockholm, had been a student at National Theater School of Sweden when Mr. Sjoman chose her for “I Am Curious.” Information on survivors was not available.

Ms. Nyman was stunned by the reaction in her homeland to the “Curious” films, she told The Times in 1974. “You know,” she said, “some people get shocked about sex. I was shocked that everyone was so shocked. It was such a quarrel about that movie. Wow!

“You could believe nobody in Sweden had ever seen a naked man or woman.”
Posted by Mercury at 4:44 PM