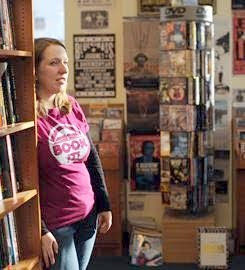 In my city of nearly two million, they are virtually gone...maybe three left. Even used bookstores are nearly gone and relegated to thrift stores.

"Is there hope for small bookstores in a digital age?"

USA TODAY
Don't tell Suzanna Hermans that cozy, well-stocked bookstores such as hers have no future during a digital age in which e-books are just a click away.

"I know people think of independent bookstores as struggling underdogs," says Hermans, co-owner and manager of Oblong Books in this picturesque Hudson Valley town. "But if I was struggling, I wouldn't be expanding." She's about to break through a brick wall to enlarge her children's section "for my customers of the future."

By emphasizing service, her store's popularity as a community gathering spot and even a new — and somewhat counterintuitive — plan to help her customers order e-books, Hermans, 26, is betting that her small store will continue to buck prevailing winds in the book business.

Borders, the nation's second-largest book chain with about 500 "superstores," has delayed payments to its vendors, faces a potential bankruptcy filing and is widely expected to announce store closings soon. Barnes & Noble, the largest chain, has embarked on what it calls a "consolidation" of its 717 superstores as it pursues an increasingly digital strategy. It already has closed all of its 798 B. Dalton mall outlets.

Years after the rise of such mega-chains — and the explosive growth of Amazon.com's discount book business — helped kill many small bookstores, e-books are sparking another shake-up.

As measured by numbers, bookstores are in inevitable decline, says Michael Cader, founder of Publishers Lunch, a digital newsletter. At the same time, he says, some "modestly sized, locally connected independent stores have found a successful formula" for surviving in today's market.

In this town of 8,000 residents about 100 miles north of Manhattan, Hermans is creating more room for children's books, educational toys and touring authors. (Peter Yarrow of Peter, Paul and Mary fame and the author of several kids' books drew about 100 people here last year.)

And in a bold move for the owner of a small bookstore, Hermans is embracing e-books. Oblong, which Hermans co-owns with her father, Dick Hermans, 62, is one of about 200 independent bookstores in a digital partnership with Google eBooks, launched in December.

The unprecedented partnership allows customers of independent bookstores to buy e-books via a link on the stores' websites to the Google eBook-store (which also sells e-books directly). During its first month, Hermans says, she sold fewer than 10 e-books. But beyond two small signs in the store and an announcement in the store's e-newsletter that goes to 2,000 readers, "we've yet to really promote it," she says.

In print books, booksellers generally are charged 50% of the publisher's list price; with e-books, which usually are cheaper, Hermans says she gets to keep 20% to 40% of the retail price.

Her customers include some "who don't even want me to mention e-books, and others who are trying out their Nooks. It's going to be one-on-one education, but it means our customers have a choice."

In contrast to Hermans' optimism, Mike Shatzkin, a publishing consultant, sees physical bookstores going the way of record shops and video rental stores. He predicts that shelf space devoted to print books in physical stores will decline by 50% during the next five years and 90% during the next decade.

Albert Greco, a Fordham University marketing professor who studies book retailing, says chain and independent stores "have never been under more pressure, and it's not all digital."

Traditional bookstores (independents and the chains, including Books-A-Million) accounted for less than half of the book market last year, Greco says. The majority of books were sold by a variety of other retailers including Amazon, Price Clubs, supermarkets and convenience stores.

The long-term economic effect of a shift from print to digital on both publishers and booksellers isn't clear. But whether the shift is dramatic or more gradual, the number of bookstores is declining.

More than 1,000 bookstores closed from 2000 through 2007, leaving about 10,600, according to the latest federal statistics. More recent casualties have included venerable local institutions such as Davis-Kidd in Nashville and Cody's in San Francisco.

Last week, Bethel Avenue Book Co. in Port Orchard, Wash., and The Muses Bookstore in Morganton, N.C., announced plans to close. Both blame the growing popularity of e-books, which could double to 20% of the market this year.

And, Cader says, "if Borders survives at all, it will do so by comprising a much smaller store base."

Bookselling was a different world in 1975, when Hermans' father opened the original Oblong Books in Millerton, N.Y., 25 miles east of Rhinebeck. That store is still open; the Rhinebeck store opened in 2001.

When Dick Hermans got into the business, he says, "our biggest competition was the Book-of-the-Month Club and other mail-order book clubs." Back then, Amazon was only a South American river, Barnes & Noble sold college textbooks in New York City, and Borders was an independent bookstore in Ann Arbor, Mich., started by University of Michigan students and brothers Tom and Louis Borders. In 1991, they sold the company to Kmart, which spun it off in 1995.

In Rhinebeck, Oblong offers no discounts, except for a few overstocked books.

"We can't afford to," Suzanna Hermans says. She doesn't have a café: "There are good coffee shops in town," she says, but her store offers free Wi-Fi and two overstuffed reading chairs.

Her biggest competition is the huge online discounter Amazon — not the Barnes & Noble in Kingston, a 10-minute drive away, or the local Stop and Shop supermarket, which stocks about 200 titles, mostly best sellers.

Her selling point: "Bookstores help create community for people in the places where they live. People may think they can live online, but in reality they live in real towns and cities, and physical bookstores help to enrich those places."

She's counting on attracting customers who "value what we offer and forgo the lowest price available." She says the two Oblong stores are in the black, with $1.5 million in revenue last year, up 2% from 2009: "We'll happily take that."

Her location helps. Rhinebeck is a popular destination, a 1½-hour train ride from Manhattan. It was the site of Chelsea Clinton's wedding last summer at the former Astor estate. Its four-block downtown, filled with upscale clothing stores and restaurants, has only one chain business, a CVS pharmacy that competes with a locally owned one. It has a local bank and local movie theater.

A growing "buy local" movement across the country is helping all kinds of locally owned stores, says Oren Teicher, head of the American Booksellers Association, the independents' trade group.

After more than a decade of decline, he says, "our membership has not only stabilized, but grown a bit," ending last year with 1,800 member stores, up 50 from a year earlier.

He says the association's recent winter meeting in Washington drew 500 "enthusiastic" booksellers, as well as 25 prospective ones who are considering opening stores.

"For 20 years," he says, "I've been hearing about the demise of independent bookstores from the doom-and-gloom folks, but we're still here."

He also contends that in an age when millions of books can be found online, the "curator skills" of local booksellers "to match a book with an individual reader is more important than ever."

That raises a key question: Do superstores, which stock up to 200,000 titles, make as much sense in a world where nearly any book can be found online?

Barnes & Noble CEO William Lynch Jr. says they do, and are actually an "asset" in the chain's digital strategy, which includes sales of its reading device, the Nook, to offset declining sales of print books. (A Goldman Sachs forecast shows print sales falling by 5% over the next four years.)

"Nook lounges" — which display the devices and offer instructions in their use — now occupy the most prominent locations in stores. Lynch says they "are a great way to introduce a lot of people to new ways of reading."

And "just as we don't see print books going away," he says, "we're not looking to close a lot of stores." But he declined to project how many the chain will have in five or 10 years.

Peter Osnos, founder of PublicAffairs Books, who has studied alternative ways to distribute books, says Barnes & Noble seems prepared for the future: "It has brick and mortar (stores), an established online site and a device business, Nook.

"No one else has integrated all the various elements of bookselling — not Amazon, certainly not Borders, and not the big-box stores with very limited inventory."

He adds, "What really hurt Borders, from the perspective of a book person like me, was the chain was no longer in the hands of true book retailers."

Borders, which has had three CEOs in the past three years, was slow to develop a digital strategy. It sells reading devices and has an e-bookstore powered by Kobo, a Toronto-based e-retailer. But from 2001 to 2008, it outsourced its online sales to Amazon. "It was utterly stupid for Borders to borrow their future from a company that didn't want them to even have a future," says Michael Norris, an analyst with Simba Information, a market researcher.

Borders' Mary Davis says, "We do not comment on outside analysis and opinions on the company."

'Store experience needs to be special'

Carol Fitzgerald, founder of BookReporter.com, a network of websites for book discussions, says the survival of bookstores, large or small, depends on the quality of their staffs.

"As the online shopping experience affords readers a wealth of information, the store experience needs to be special," she says. "There is something about speaking directly to someone who not only knows how to ring a register, but knows books and who can make you want to buy a book —now."

In visits last year to 50 bookstores, she found that "the staffing at the chains is uneven. While there are passionate booksellers at every store, there is also typically an inverse proportion who are not as informed and are not challenged to be."

Cader sees room for bookstores to experiment with digital-delivery kiosks, on-demand printing and self-publishing services: "Maybe we'll come to think of them as reading stores, or readers' stores, or publishing stores, or idea stores, more than simply bookstores."

In Rhinebeck, Oblong Books attracts customers such as nurse Linda Helbing, 62, who buys about 20 books a year, mostly paperbacks for her monthly book club. She says she appreciates the store's "service — they know their books," and its "feel. It's the kind of a place where you end up talking to strangers about books."

Novelist Bradford Morrow, who drew a crowd of 50 to Oblong on a recent Sunday afternoon for a reading of his latest novel, The Diviner's Tale (available in hardcover and as an e-book), says he loves browsing and meeting readers in bookstores, and can't imagine a world without them.

But he notes that five of his earlier novels, which had gone out of print, are being reissued as e-books by Open Road Media, a new all-digital publisher. That leaves him with an appreciation of both physical bookstores and e-books, and "a perhaps quixotic hope that they find positive ways to interact."

Suzanna Hermans, who learned to run the cash register in her dad's bookstore when she was 8, had dreamed of becoming an actress until reality set in during her senior year at the University of Iowa four years ago. "The chance of success seemed too low."

Some may think the chance of success in a small bookstore is nearly as low. Not her: "This is my career. This is what I love to do. I want to do it for the next 50 years."
Posted by Mercury at 6:15 AM