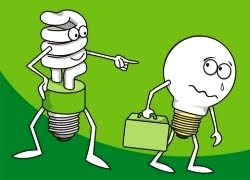 Again the nanny government. What about those lamp shades that must rest on the spherical properties of an incandescent light bulb? Isn't the mercury a concern? Save energy and pollute the land?

USA TODAY
Faced with a U.S. phaseout of incandescent light bulbs starting next year, some consumers are taking pre-emptive steps: They're stockpiling the bulbs.

Under a 2007 energy law, manufacturers must start phasing out incandescent bulbs in favor of more-efficient bulbs such as compact fluorescent lamps, or CFLs.

While CFLs use at least 75% less energy, some consumers complain the lighting is dimmer, doesn't look as warm and doesn't come on right away. Some also worry about the disposal requirements because of the bulbs' tiny mercury content.

Ilse Metchek of Los Angeles tried to convert to CFLs but was so unhappy she squirreled away about three dozen incandescents, so "I will be able to read in bed without squinting."

Most Americans plan to switch to more-efficient bulbs, according to a recent survey by lighting company Osram Sylvania. Yet, given that cheaper incandescents are still in plentiful supply, some consumers can't resist stocking up.

Sue Larkin of Tulsa has hundreds: "I can't see a thing with the new bulbs and can't afford them anyway."

Says Susan Drake of Marietta, Ohio, "I have stocked up on enough incandescent bulbs to last for the next 50 years."

Such reports are common whenever a new standard is introduced, says the Natural Resources Defense Council's Noah Horowitz. He says consumers will still be able to buy incandescents, but new ones will have more-efficient halogen capsules.

About 13% of Americans said they would stock up on 100-watt incandescents and continue using them after they are phased out in January, says the Osram Sylvania survey. The 75-watt version will be phased out in 2013, and the 60-watt and 40-watt in 2014.

Home Depot stores in California, where 100-watt incandescent bulbs were banned Jan. 1, a year ahead of the national schedule, has seen an uptick in sales of incandescents. But CFLs are selling better, too, thanks to increased awareness, says spokeswoman Jean Niemi.

Those disappointed with CFL lighting might prefer the 72-watt halogen incandescent that Horowitz says will give off the same light as the old 100-watt bulb. He says they cost about $2 each but can save $3 in electricity over their 1,000-hour life span. Another option, he says, is the LED (light emitting diode), which lasts even longer than CFLs and uses less power. He expects high LED prices to fall dramatically.
Posted by Mercury at 5:55 AM