Cats and the fair gender 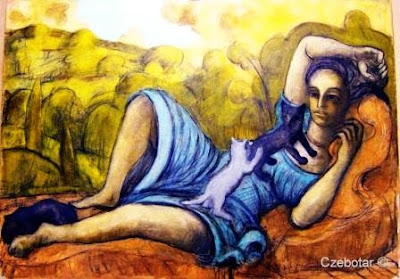 Theodore Czebotar
How complex the relationship between humans and pets can be.

Cats attach to humans, and particularly women, as social partners, and it's not just for the sake of obtaining food.

Discovery News
The bond between cats and their owners turns out to be far more intense than imagined, especially for cat aficionado women and their affection reciprocating felines, suggests a new study.

Cats attach to humans, and particularly women, as social partners, and it's not just for the sake of obtaining food, according to the new research, which has been accepted for publication in the journal Behavioural Processes.

The study is the first to show in detail that the dynamics underlying cat-human relationships are nearly identical to human-only bonds, with cats sometimes even becoming a furry "child" in nurturing homes.

"Food is often used as a token of affection, and the ways that cats and humans relate to food are similar in nature to the interactions seen between the human caregiver and the pre-verbal infant," co-author Jon Day, a Waltham Centre for Pet Nutrition researcher, told Discovery News. "Both cat and human infant are, at least in part, in control of when and what they are fed!"

For the study, led by Kurt Kotrschal of the Konrad Lorenz Research Station and the University of Vienna, the researchers videotaped and later analyzed interactions between 41 cats and their owners over lengthy four-part periods. Each and every behavior of both the cat and owner was noted. Owner and cat personalities were also assessed in a separate test. For the cat assessment, the authors placed a stuffed owl toy with large glass eyes on a floor so the feline would encounter it by surprise.

The researchers determined that cats and their owners strongly influenced each other, such that they were each often controlling the other's behaviors. Extroverted women with young, active cats enjoyed the greatest synchronicity, with cats in these relationships only having to use subtle cues, such as a single upright tail move, to signal desire for friendly contact.

While cats have plenty of male admirers, and vice versa, this study and others reveal that women tend to interact with their cats -- be they male or female felines -- more than men do.

"In response, the cats approach female owners more frequently, and initiate contact more frequently (such as jumping on laps) than they do with male owners," co-author Manuela Wedl of the University of Vienna told Discovery News, adding that "female owners have more intense relationships with their cats than do male owners."

Cats also seem to remember kindness and return the favors later. If owners comply with their feline's wishes to interact, then the cat will often comply with the owner's wishes at other times. The cat may also "have an edge in this negotiation," since owners are usually already motivated to establish social contact.

Although there are isolated instances of non-human animals, such as gorillas, bonding with other species, it seems to be mostly unique for humans to engage in social relationships with other animals. In this case with cats, it's for very good reason. Cats could very well be man's -- and woman's -- best friend.

"A relationship between a cat and a human can involve mutual attraction, personality compatibility, ease of interaction, play, affection and social support," co-author Dorothy Gracey of the University of Vienna explained. "A human and a cat can mutually develop complex ritualized interactions that show substantial mutual understanding of each other's inclinations and preferences."

Dennis Turner, a University of Zurich-Irchel animal behaviorist, told Discovery News the he's "very impressed with this study on human-cat interactions, in that it has taken our earlier findings a step higher, using more modern analytical techniques to get at the interplay between cat and human personalities."

Turner, who is also senior editor of The Domestic Cat: The Biology of Its Behaviour (Cambridge University Press), added that he and his colleagues "now have a new dimension to help us understand how these relationships function."

Kotrschal's team is presently involved in a long-term study of man's other well-known animal best friend: dogs.
Posted by Mercury at 4:43 PM