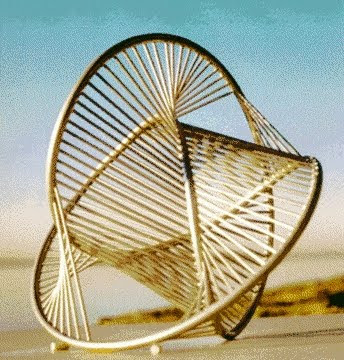 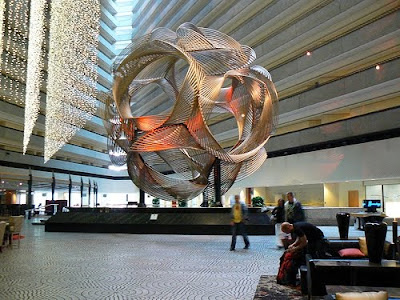 The New York Times
Charles O. Perry, a sculptor who created dozens of mathematically inspired works for plazas and sculpture gardens throughout the United States and abroad and created “Continuum,” the knotted black Möbius strip that stands in front of the Smithsonian’s National Air and Space Museum in Washington, died on Tuesday at his home in Norwalk, Conn. He was 81.

The cause was stomach cancer, his son Marco said.

Mr. Perry was an architect working for Skidmore, Owings & Merrill in San Francisco when he began making sculptural models at night in a garage. In 1964 his works were exhibited in a one-man show at the Hansen Gallery that sold out and earned him a commission from the city of Fresno.

That year he also won the Prix de Rome, an award that sent him to study sculpture at the American Academy in Rome, where he stayed for the next 14 years to practice architecture and make large-scale works of sculpture that drew inspiration from the geometry inherent in natural forms.

“Continuum,” completed in 1976 for the new Air and Space Museum, is a bit of topological whimsy that plays with the peculiarities of the Möbius strip, which has one continuous surface and one edge.

“In this case, the edge of the sculpture portrays the path of a star as it flows through the center of the sculpture’s ‘black hole’ into negative space-time and on again into positive space,” Mr. Perry told Ivars Peterson for the book “Fragments of Infinity: A Kaleidoscope of Math and Art” (2001).

Charles Owen Perry was born on Oct. 18, 1929, in Helena, Mont., where his father owned a successful gold and gem mine.

He served in the Army as a forward observer with an artillery unit in Korea, where he was awarded a bronze star for bravery and invented his own gun sight out of scrap parts to achieve better depth perception.

After returning to the United States, he enrolled in the School of Art and Architecture at Yale, earning a master’s degree in architecture in 1958.

At the suggestion of the painter Josef Albers, he experimented with a variety of materials in a quest to discover their inner nature. In so doing, he became interested in the rhombus and invented plastic rhombic hexahedrons that interlocked to form novel shapes. These were later exhibited as art at the 1969 Spoleto Festival in Italy and, under the name Perrygons, sold as construction toys through the Museum of Modern Art.

The artistic possibilities of geometric forms, and the mysteries of the universe’s physical laws, provided Mr. Perry with an inexhaustible source of material. The Möbius strip reappeared in the sculptures “Calligraphic Möbius” and “Helix Möbius Mace,” both in the Crystal City development in Arlington, Va.; “Continuum II” at the Marina Center Holdings Building in Singapore; and “Solstice,” at the Bank of America Building in Tampa, Fla., an assemblage of silver pipes described on its base as “a two-thirds twist triangular torus Möbius.”

Mr. Perry also designed gold and silver jewelry for Tiffany & Company, a semi-abstract chess set made of nickel-plated tubing, and sculptural puzzles. In the early 1990s he designed several chairs: an ergonomic stacking chair, known as the Perry Chair, for Krueger International; the Uno office chair for Steelcase; and the Virtuoso for Virco.

In addition to his son Marco, of Brooklyn, he is survived by his wife, Sheila Henry de Perry; a brother, Alexander, known as Sandy, of St. Marys, Ga.; a sister, Avery Wall of Omaha; three other sons: Paul, of Lexington, Mass., Carlo, of Brooklyn, and Pat, of Yardley, Pa.; and nine grandchildren.

Charles O. Perry (1929-2011) was a creator, an artist of many dimensions who ponders the wonderful mysteries of the universe. His large scale and monumental sculptures celebrate and question the laws of nature. His intuitive investigation of nature's variables provides the springboard for many of Perry's concepts. Believing that sculpture must stand on its own merit without need of explanation, Perry's work has an elegance of form that masks the mathematical complexity of its genesis.

Perry has always extolled the beauties of nature and the qualities of materials, beginning with watercolors of his native Montana, inventing equipment to improve his tour of duty in Korea, and celebrating Japanese reverence for natural materials. He returned to America to study art and architecture and explore the “what ifs” at Yale University in 1954. While at Yale, Joseph Albers, Chairman of the Art School, encouraged Perry to play with materials and to discover their true nature. As a student, he pondered the nature of the rhombus, resulting in the invention of a building brick that needed no mortar and was unrestricted by the limits of size. The concept was intuitive, the result was visual art. The piece was later shown at Spoleto's Festival, Italy, in 1969.

After graduating from Yale, Charles Perry practiced architecture in San Francisco, California with the firm of Skidmore, Owings, & Merrill, from 1958- 1963. During his architectural career he had developed many sculptural models and was offered a one-man sculpture show in San Francisco. At the same time, he won the Rome Prize, a prestigious award granted by the American Academy in Rome for two years study in Italy. Prior to leaving for Rome in 1964, he had secured two major sculpture commissions. "The basic difference in the discipline of architecture and sculpture is that one can't force a solution in sculpture, whereas in architecture, one can arrive at an apparent 'rational' solution through continual work." For Perry, the appropriateness of the form is the criteria for the final goal.

Since 1964, Perry concentrated on large scale public sculpture, the most prestigious of which stands in front of the National Air and Space Museum, in Washington, D.C. The piece, "Continuum", began as an exploration of the Moebius strip, product of pure mathematics formed by joining two ends of a strip of paper after giving one end a 180 degree twist, thus creating only one edge. The center of the bronze sculpture symbolizes a black hole, while the edge shows the flow of matter through the center from positive to negative space and back again in a continuum.

"When I set off to be an artist, I would avoid the arbitrary, esteem the orders of God in Nature, make forms that were beautiful, which appeared to have no author, forms you thought you had seen before; entwined with mathematics, geometry, topology, spinning, interlocking, always saying thank you God."

As an industrial designer, Perry has invented three unique IBD prize winning chairs. His patents on chair design are licensed to Krueger International, Steelcase, and Virco. Perry has designed various forms of art such as a collection of jewelry and silver objects for Tiffany, puzzles for the Museum of Modern Art, and a chess set which is in the Design Collection of MoMA. In recent years, Perry has frequently lectured on mathematics and art, in conferences throughout the world.
Posted by Mercury at 6:46 AM

Thanks Charles...that was a piece by Jim Willis called "Flying Dragon".