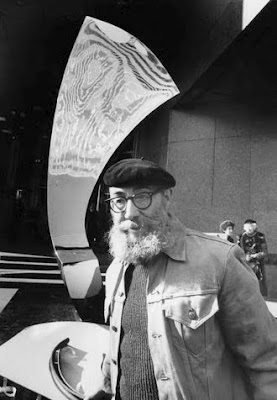 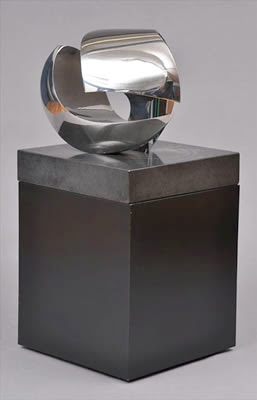 The New York Times
Roy Gussow, an abstract sculptor whose polished stainless-steel works with swooping contours gleam in public squares and corporate spaces, died on Feb. 11 in Queens. He was 92 and had lived and worked in Long Island City, Queens, for nearly half a century.

The cause was a heart attack, his daughter Jill Gussow said.

New Yorkers passing by the Family Court building at Lafayette and Leonard Streets in Lower Manhattan may not have known Mr. Gussow’s name, but they were probably struck by “Three Forms,” his eight-foot-high sculpture on a two-foot granite base. (The sculpture had stood outside the courthouse since 1974 but was recently taken down for renovation.)

The work is a blend of three distinct flowing shapes. What is striking about it — as with many of Mr. Gussow’s sculptures — is its mirrorlike finish, which casts reflections from all directions as the spectator moves around it.

“I strive for lyrical equilibrium among distinctly different elements, and I like to think I am suggesting optimism, beauty and well-being,” Mr. Gussow said of “Three Forms” — as he could have said of most of his work.

Large-scale pieces by Mr. Gussow stand in more than a dozen cities, including outside the Civic Center in Tulsa, Okla., the Xerox building in Rochester and insurance company buildings in Hartford, and on the campus of North Carolina State University.

Outside City Hall in Harrisburg, Pa., Mr. Gussow’s “Crystal” was unveiled in 1983. Standing 17 feet high, its six wedge-shaped facets reach out to viewers while reflecting the sun and casting images of passing clouds.

In 1967, Mr. Gussow helped fabricate a sculpture designed by José de Rivera: a 16-foot-long continuous swirl of stainless steel in front of the Smithsonian Institution’s Museum of History and Technology, now the Museum of American History. Mounted on a granite-sheathed tower, it stands 24 feet high and was one of the first abstract sculptures to adorn a major public building in Washington.

Mr. Gussow’s smaller works are in the collections of many museums, including the Museum of Modern Art, the Guggenheim, the Whitney and the Brooklyn Museum. When some of his sculptures were exhibited at the prominent Borgenicht Gallery on upper Madison Avenue in 1973, James R. Mellow wrote in The New York Times, “This is precisionist work of a high degree, every effect calculated for maximum effect and carried off with perfect aplomb.”

Born in Brooklyn on Nov. 12, 1918, Roy Gussow was one of three children of Abraham and Mildred Gussow. He wanted to be a farmer and went to Farmingdale State College on Long Island but changed course and earned a degree in landscape architecture in 1938.

While serving in the United States Army in France during World War II, Mr. Gussow met the painter George Kachergis, who urged him to pursue a career in art and design. Returning to the United States, he enrolled at the Institute of Design in Illinois, where the cubist sculptor Alexander Archipenko became a mentor. Mr. Archipenko took him to his summer school in Woodstock, N.Y., in 1946. There he met Mary Maynard, whom he would later marry. She died in 2004.

Besides his daughter Jill, Mr. Gussow is survived by two other daughters, Mimi Gussow and Olga Hauptman; two grandchildren; and one great-granddaughter.

Mr. Gussow taught at Bradley University, the Fine Arts Center in Colorado Springs and the North Carolina School of Design near Raleigh before moving to Manhattan in 1962. Two years later he moved to an industrialized section of Long Island City, becoming one of the first of a wave of artists to settle there.

In a building that had been a silver-plating factory, he set up his home and his studio and began bringing in drill presses, polishing grinders, a hydraulic lift and a band saw that his daughter said was “the size of a truck.” All to fashion sleek, seemingly seamless works.