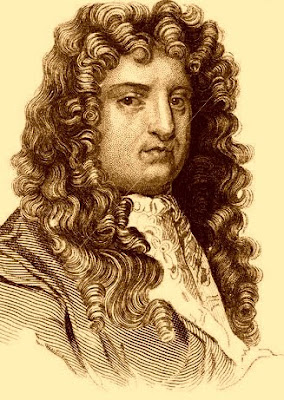 Samuel Butler was an English satirist that aimed his sharp pen at the like of Oliver Cromwell and the Puritans [Hudibras]. He also poked fun of the new Royal Science society and wrote a poem called "The Elephant in the Moon"

In the poem, a group of virtuosi have trained their telescope on the moon and observed a war going on, a lunar conflict of epic proportions. Not only did they see swarming armies of lunar combatants, but one side was even using elephants! The dilettantes promptly sat down to write up their discovery, "and, for the general satisfaction, to print it in the next Transaction," referring to the now famous journal of the Royal society, then brand new. While they labored, their servants were busy as well: "The foot-boys, for diversion too, As having nothing else to do, Seeing the telescope at leisure, Turn'd virtuosoes for their pleasure." The servants took the telescope apart, and found a mouse in the tube, the true elephant on the moon, along with swarms of flies and gnats, which made up the lunar armies. Butler was one of many outsiders who found the activities of the early Royal Society ludicrous, as men with too much money and time on their hands, and too little wit, collected two-headed calves, looked at mold under the microscope, and tried to transfuse sheep’s-blood into a dog. Fortunately for the likes of Robert Boyle and Isaac Newton, the Royal society weathered the storm.

The Elephant in the Moon

A learned society of late,
The glory of a foreign state,
Agreed, upon a summer's night,
To search the Moon by her own light;
To make an inventory of all
Her real estate, and personal;
And make an accurate survey
Of all her lands, and how they lay,
As true as that of Ireland, where
The sly surveyors stole a shire:
T' observe her country, how 'twas planted,
With what sh' abounded most, or wanted;
And make the proper'st observations
For settling of new plantations,
If the society should incline
T' attempt so glorious a design.


This was the purpose of their meeting,
For which they chose a time as fitting;
When at the full her radiant light
And influence too were at their height.
And now the lofty tube, the scale
With which they heaven itself assail,
Was mounted full against the Moon;
And all stood ready to fall on,
Impatient who should have the honour
To plant an ensign first upon her.
When one, who for his deep belief
Was virtuoso then in chief,
Approved the most profound , and wise,
To solve impossibilities,
Advancing gravely, to apply
To th' optic glass his judging eye,
Cried, 'Strange!' - then reinforced his sight
Against the Moon with all his might,
And bent his penetrating brow,
As if he meant to gaze her through;
When all the rest began t'admire,
And, like a train, from him took fire,
Surprised with wonder, beforehand,
At what they did not understand,
Cried out, impatient to know what
The matter was they wondered at.

Quoth he, 'Th'inhabitants o'th Moon,
Who, when the sun shines hot at noon,
Do live in cellars underground,
Of eight miles deep, and eighty round,
In which at once they fortify
Against the sun and th' enemy,
Which they count towns and cities there,
Because their people' civiller
Than those rude peasants, that are found
To live upon the upper ground,
Called Privolans, with whom they are
Perpetually in open war;
And now both armies, highly enraged,
Are in a bloody fight engaged,
And many fall on both sides slain,
As by the glass 'tis clear, and plain.
Look quickly then, that every one
May see the fight before 'tis done.'
With that a great philosopher,
Admired, and famous far and near,
As one of singular invention,
But universal comprehension,
Applied one eye, and half a nose
Unto the optic engine close.

Quoth he, 'A stranger sight appears
Than e'er was seen in all the spheres,
A wonder more unparalled,
Than ever mortal tube beheld;
An elephant from one of those
Two mighty armies is broke loose,
And with the horror of the fight
Appears amazed, and in a fright;
Look quickly, lest the sight of us
Should cause the startled beast t'imboss.
It is a large one, far more great
Than e'er was bred in Africa yet;
From which we boldly may infer,
The Moon is much the fruitfuller.
Samuel Butler [Wikipedia]
Posted by Mercury at 11:52 AM