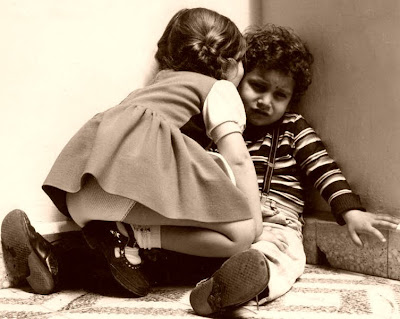 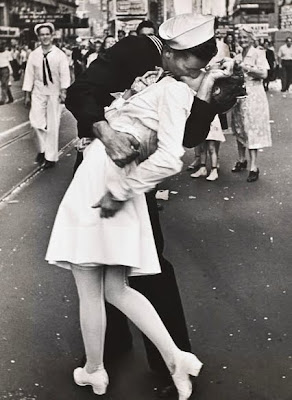 Alfred Eisenstaedt’s image of a sailor kissing a nurse in Times Square on V-J Day in 1945.

This "racy" scene is from the New York stage comedy, The Widow Jones, in which May Irwin and John Rice starred. According to Edison film historian C. Musser, the actors staged their kiss for the camera at the request of the New York World newspaper. It was the most popular Edison Vitascope film in 1896.
"The science of kissing explained"

Los Angeles Times
Some consider it humanity’s most intimate exchange. Yes, even more intimate than sex.

Most of us have done it, and will do it many more times in our lifetimes: It’s kissing.

Sheril Kirshenbaum, a research scientist at the University of Texas, decided to take the kiss and put it under a microscope, in a way. She wanted to take the universal act and examine it from various scientific angles. The result of her research is her new book, “The Science of Kissing: What Our Lips Are Telling” (Grand Central Publishing, 2011).

Kirshenbaum recently spoke with The Times about why a kiss really is more than just a kiss:

“Scientists are not exactly sure why we kiss.” Explain. You reference Darwin’s take in “The Expression of the Emotions in Man and Animals.”

Kissing as a behavior hasn’t been studied the way other behaviors have. How do you classify or quantify different types of kisses? I dug into the evolutionary biology and anthropology texts. Some of these deal with our earliest feeding experiences as toddlers, such as nursing. In terms of individual experiences, neural pathways are probably laid down early in our lives and then reinforced by similar experiences later in life.

Darwin talked about kissing and kissing-like behaviors (licking, blowing) and he surmised that it’s probably a universal experience. Because it is so important for social bonding.

Were we born knowing how to kiss, or is it learned behavior?

Kissing is a great example of a balance between the nature and nurture we always talk about. We see similar behaviors across the animal kingdom. So there is something innate.

It’s also something we pick up, not just from family and friends but it’s also exported by Hollywood. It is part of the community you’re in and what you’ve been exposed to.

Decades ago, anthropologists estimated that 90% of cultures across the world kiss. That was before the rise of the Internet and the frequency with which so many people travel around the world, so I suspect that percentage is even higher today.

Do men and women experience a kiss differently?

Men and women have different motivations when it comes to kissing.

Gordon Gallup did a study of more than 1,000 subjects. He found that men often describe a kiss as “a means to an end.”

Women place more significance on a kiss -– imagining a future together, thinking about whether it’s the right match. I don’t like gender stereotypes, so I called Gallup, and we talked about reproduction strategies. Women have to be very particular about who they choose, biologically speaking. Women are much more sensitive to scent and taste -– keen as to whether this is someone who is a well-suited match from a reproductive standpoint. Men can be less picky because they have far more opportunities to pass on their genes throughout their lives.

You went into the lab and enlisted NYU-based neuroscientists to examine the brain’s reaction to kissing. What did you find?

David Poeppel, a neuroscientist at NYU, has a brain scanning magnetoencephalography (MEG) machine. I thought it would be interesting to look at how the brain responds to kissing, especially with regard to gender, given that much of the primary literature highlighted differences between men and women. Our first obstacle was how to get kissing in the machine. You can’t fit a couple inside and ask them to make out. Two heads won’t fit.

I ended up with nine photos of different kisses (they included opposite-sex kisses and same-sex kisses). We ran the experiment at NYU. The results were not at all what I expected. To our surprise, the images of same-sex couples evoked the strongest response in all subjects.

This likely has to do with a phenomenon in neuroscience known as the “frequency effect.” When we encounter something often, our brain’s response is not as strong as when we encounter it infrequently. The volunteers in our kissing study likely observed opposite-sex pairs kissing more often than same-sex pairs.

Explain “red equals reward” in the evolution of humans and lips.

V.S. Ramachandran of UC San Diego suggests that we are probably wired to recognize red -– to draw our attention. Our primate ancestors needed to detect ripe fruit among the brush -– recognizing the color red resulted in a reward -- to get food, to live long enough to pass on your genes.

Over time red likely served as an important sexual signal, and became enhanced on the posteriors of females when they were ready to mate. After our ancestors evolved and stood upright, these sexual signals shifted. Zoologist Desmond Morris describes our lips as a “genital echo.” For this reason, they became intensely alluring to the opposite sex.

What about the chemistry?

A good kiss is associated with a rise in a chemical called oxytocin (popularly known as the "love hormone") that leads to strong feelings of attachment as we form a special bond with someone else. Meanwhile, dopamine rises, resulting in feelings of craving and desire. It can also seem impossible to stop thinking about the other person because of a serotonin, which causes obsessive feelings and thoughts. A kiss acts like a natural drug, making it a very powerful experience. 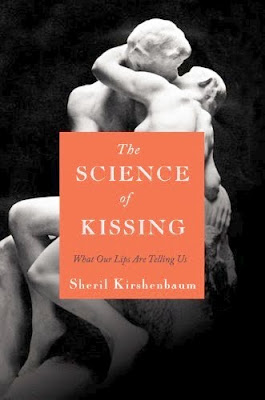 The Science of Kissing: What Our Lips Are Telling Us

the possibilities of disease should discourage this...rational thought is beyond most males at point where lips contact