Hate groups on the rise 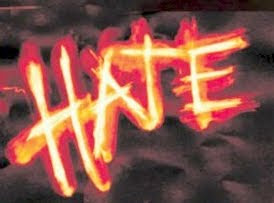 "Annual report cites rise in hate groups, but some ask: What is hate?"

The Southern Poverty Law Center says the number of US hate groups has topped 1,000 for the first time. But conservative critics say a too-broad definition of hate stifles legitimate debate.

The Christian Science Monitor
Even as the Southern Poverty Law Center points out that the number of US hate groups has topped 1,000 for the first time, the civil rights organization is receiving flak from critics on the right who say an overbroad definition of “hate” vilifies innocent people and stifles vigorous debate about issues critical to America's future.

Tension erupted recently between the SPLC and a slew of Republicans, including House Speaker John Boehner of Ohio and Rep. Michele Bachmann of Minnesota (who tops the SPLC's “militia enablers list”), who protested the SPLC’s listing of the conservative Family Research Council as a hate group. The SPLC said the Family Research Council is knowingly pushing falsehoods about gay people.

The tension between the SPLC and its critics on the right underscores that “conflicts in America today are deeper than they were in the 1850s,” says Donald Livingston, an Emory University philosophy professor and a former member of the pro-secessionist League of the South, which the SPLC today lists as a hate group.

The Montgomery, Ala.-based SPLC, which became well-known for civil lawsuits that weakened the KKK and other white supremacist groups, is careful to note that organizations on its list don't necessarily advocate violence. Its definition of a hate group and “ideologues” includes groups and people who suggest that an entire group of human beings are, by virtue of class characteristics, “somewhat less,” says Mark Potok, the editor of the SPLC's Intelligence Report, which published its findings Wednesday.

“We're not in any way suggesting that these groups should be outlawed or free speech should be suppressed ... but it's a kind of calling out the liars, the demonizers, the propagandists,” says Mr. Potok. While the groups themselves may not advocate violence, he says, such speech has “driven people and will continue to drive people to murder.”

Neo-Nazi-like hate groups grew by nearly 10 percent since 2009, to 1002; anti-immigration vigilante groups grew by 3 percent, to 319; and antigovernment “Patriot” groups – defined as “conspiracy-minded organizations that see the federal government as their primary enemy” – grew by 60 percent, to 824. (See the SPLC's “hate map” here.)

Potok notes that the slowdown in the increase of the number of so-called "nativist" anti-immigration groups is probably related to the enactment of tough new measures against illegal immigrants, such as in Arizona. But while legislators in states such as Virginia and Montana have proffered a slew of antifederal legislation this year, the mainstreaming of hard-right issues hasn't dramatically “taken the wind out of the sails” of Patriot groups, he says.

“[Despite] historic Republican gains, the early signs suggest that even as the more mainstream political right strengthens, the radical right has remained highly energized,” the report states.

As evidence, the report points to an 11-day period in January when “a neo-Nazi was arrested headed for the Arizona border with a dozen homemade grenades; a terrorist bomb attack on a Martin Luther King Jr. Day parade in Spokane, Wash., was averted after police dismantled a sophisticated anti-personnel weapon; and a man who officials said had a long history of antigovernment activities was arrested outside a packed mosque in Dearborn, Mich., and charged with possessing explosives with unlawful intent. That’s in addition, the same month, to the shooting of US Rep. Gabrielle Giffords in Arizona, an attack that left six dead and may have had a political dimension.”

While the SPLC's investigations and studies are used by some law enforcement agencies concerned about domestic terrorism, its overall work, its critics on the right say, has taken on an overtly political dimension by giving ideological cover for attacks primarily on white conservatives and by turning the word “patriot” into a euphemism.

In December, 22 Republican lawmakers, among them Speaker Boehner and Representative Bachmann, three governors, and a number of conservative organizations took out full-page ads in two Washington papers castigating the SPLC for “character assassination” by listing the conservative Family Research Council as a hate group.

Professor Livingston’s own run-in with the SPLC is over his previous association with the League of the South, initially a largely academic organization that promoted the notion that the South might have to secede. The SPLC lists him as an "ideologue" of the neo-Confederate movement.

According to the SPLC, the League of the South today “is a neo-Confederate group that advocates for a second Southern secession and a society dominated by ‘European Americans.’ The league believes the ‘godly’ nation it wants to form should be run by an ‘Anglo-Celtic’ (read: white) elite that would establish a Christian theocratic state and politically dominate blacks and other minorities.”

Livingston says he left the League after it became more political in nature, but adds that it is not a hate group.

Emory University, Livingston says, looked into claims in a college newspaper story that used the SPLC's designation to link him to a "hate group," but he was cleared and backed by the university.

"They really need to explain what they mean by hate and how in the world [Loyola economist Thomas] DiLorenzo or myself could be associated with something called hate," says Livingston. "We don't hate anybody."

In January, Mr. DiLorenzo was called out on the House floor for being a member of the League of the South. Mr. DiLorenzo says he's not a member, but Loyola University in Baltimore is investigating.

Livingston, who describes himself as a former supporter of the SPLC, questions whether the organization's "hate group" reports are primarily tied to its fund-raising activities. He also notes that many of those listed by the SPLC take it as a "badge of honor," much as tea party activists took to wearing "I'm a right-wing extremist" T-shirts.

Nevertheless, he says, "it's time for some reality check on this sort of thing, beginning with the very concept of hate. The SPLC has a political agenda and they vilify people, that's what they do. There's very little in the way of an empirical examination of groups that might pose a threat to civil order. There's almost nobody left in the Klan, so what they do is they find respectable groups or high-profile people and they say, 'X is linked to Y, who is linked to a hate group.' That's what McCarthy did."

The SPLC’s Potok takes the criticisms in stride.

"We are regularly accused of trying to shut down people's speech rights, of trying to send anyone to prison who is not politically correct," Potok says. "Those criticisms are ludicrous, and they come from people who don't read what we write."
Posted by Mercury at 8:21 AM