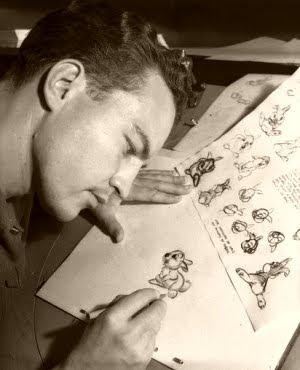 Justice joined Walt Disney Studios in 1937 and animated Chip 'n' Dale as well as Thumper in 'Bambi.' He directed the animated opening for the TV series 'The Mickey Mouse Club.'

Los Angeles Times
Bill Justice, a former Walt Disney Studios animator who worked on classics such as "Fantasia," "Bambi" and "Alice in Wonderland" and later joined Walt Disney Imagineering where he helped program Audio-Animatronics figures for attractions at Disneyland and Walt Disney World, died Thursday, a day after he turned 97.

An Ohio native who launched his career at Walt Disney Studios in 1937, Justice's credits as a Disney animator include "Saludos Amigos," "Victory Through Air Power," "The Three Caballeros," "Make Mine Music" and "Peter Pan."

Among the characters Justice animated were Thumper in "Bambi" and the mischievous Chip 'n' Dale.

"If he'd done nothing else but direct that unforgettable Mickey Mouse Club opening, he'd have a place in the hearts of baby-boomer Disney fans everywhere," said film critic and historian Leonard Maltin, adding that Justice had a long and diverse career at Disney.

"He did so many different things over the course of his career and wound up as an Imagineer, bringing the same sense of inventiveness to that field as he did to animation," Maltin said.

After joining Walt Disney Imagineering in 1965, Justice helped program Audio-Animatronics figures for Disneyland attractions such as Great Moments with Mr. Lincoln, the Carousel of Progress, Mission to Mars, Pirates of the Caribbean, the Haunted Mansion, Country Bear Jamboree and America Sings.

Justice was born Feb. 9, 1914, in Dayton, Ohio, and grew up in Indianapolis. He studied to be a portrait artist at the John Herron Art Institute, which is now affiliated with Indiana University in Indianapolis. He moved to California after graduating in 1935.

In the 1950s and early '60s, Justice directed three Oscar-nominated Disney animated shorts, "Noah's Ark," "A Symposium on Popular Songs" and "The Truth About Mother Goose."

Teamed with Disney colleagues X Atencio and T. Hee, Justice also did stop-motion animation in live-action Disney features such as "The Parent Trap," "Mary Poppins" and "Babes in Toyland."

"Bill was the leader of our trio," said Atencio. "He was a great animator, particularly on the short subject. He was as good as they came."

Justice, who retired in 1979, chronicled his 42 years at Disney in the book "Justice for Disney," which Maltin described as "a vivid personal reminiscence."

"In his later years," Maltin said, "he was happy to attend Disney fan conventions and was notorious for drawing Disney characters on linen hotel napkins or paper plates wherever he went."

Justice is survived by his wife, Kim; his daughter, Melissa Justice; and a granddaughter.