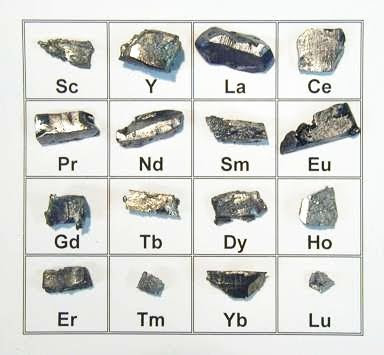 Recent interruptions in exports of rare earth minerals are due to a sharp cut in export quotas announced last July, argue China and rare earths analysts.

The Christian Science Monitor
China sought Wednesday to reassure the world it had not and would not use its chokehold on supplies of critical rare earths for political purposes, and pledged to maintain its exports.

“China will continue to supply rare earths to the world,” the Commerce Ministry said in a faxed statement, denying earlier reports in the official China Daily newspaper that the government planned to cut exports next year by 30 percent.

While insisting that politics is not being played with the class of minerals, the government nevertheless is cutting exports. Last July, China slashed export quotas for rare earths, which means less of its production is being shipped overseas. Rare earth elements are crucial to the manufacture of many high-tech items, from smart bombs to mobile phones to wind turbines. China mines 97 percent of the world’s supply.

In a separate statement, a Commerce Ministry spokeswoman who identified herself only as Ms. Chen denied a report in The New York Times that China had halted shipments of rare earths to the United States and Europe.

“China has not imposed any embargo,” she said. The report followed suggestions last month that China had banned rare earth exports to Japan.

Any recent interruptions in exports of rare earths were due to the export quota cut in July argues Mary Zhang, a rare earths analyst with Asian Metals, a Beijing based market research firm. “Export quotas are very tight,” she says.

Some exporters have exhausted their annual quota and others “do not want to accept orders at the moment because they are expecting higher prices,” Ms. Zhang says.

China slashed its six month export quota by 72 percent in July, arguing the country needed to protect its supplies for the future.

The world woke up to China’s control of the world market in the 17 strategically and economically important rare earth elements following reports last month that China had suspended sales of them to Japan during a territorial dispute.
Questions of motive

The Japanese trade minister has accused China of imposing an embargo, which Beijing has denied.

The New York Times report Wednesday suggested that a halt in shipments to the US was linked to the US Special Trade Representative’s decision Friday to investigate charges that China is illegally subsidizing its green tech sector.

Among the allegations brought by the United Steelworkers in its complaint to the USTR was that Beijing is restricting the export of materials needed for green technology in order to force US manufacturers to relocate in China so as to ensure access to such materials.

Deng Xiaoping, the leader who put China on the path to economic reform, once compared China’s reserves of rare earths to Middle Eastern nations’ supplies of oil. The recent reports of export restrictions have raised fears that Beijing might one day impose an OPEC-style embargo.

Chinese premier Wen Jiabao sought two weeks ago to allay such concerns. “China will not use rare earths as a bargaining tool” he pledged at a meeting with European business leaders. “China will meet domestic and world demand.”

An article this week in the People’s Daily, the official mouthpiece of the ruling Communist party, insisted that China was wise to guard its rare earths.

The United States, Russia, and Australia all have significant reserves of rare earths, but mining them has proved uneconomical at usual world prices and environmentally harmful. Producers in those countries have closed their mines in recent years, leaving China almost alone as a supplier.

Ms. Zhang, the metals analyst, says she believes that market forces rather than government decisions explain interruptions in Chinese rare earth shipments that traders have reported.

Some of the 33 Chinese and foreign companies licensed to export rare earths cannot fill their orders because they have exhausted their quotas, she says. And with the price of some elements such as Lanthanum and Cerium six times higher than they were earlier in the year, smugglers are seeking quick profits by disguising shipments of such materials as ceramic or other industrial powders.

a couple of weeks ago at a White House ceremony President Obama touted solar panels on the place as a step forward in reaching energy independence. only problem, the rare earth metals in the panels are from China because the environ-mental-less standing with him have locked up land in the United States where we could mine them...a bright bunch